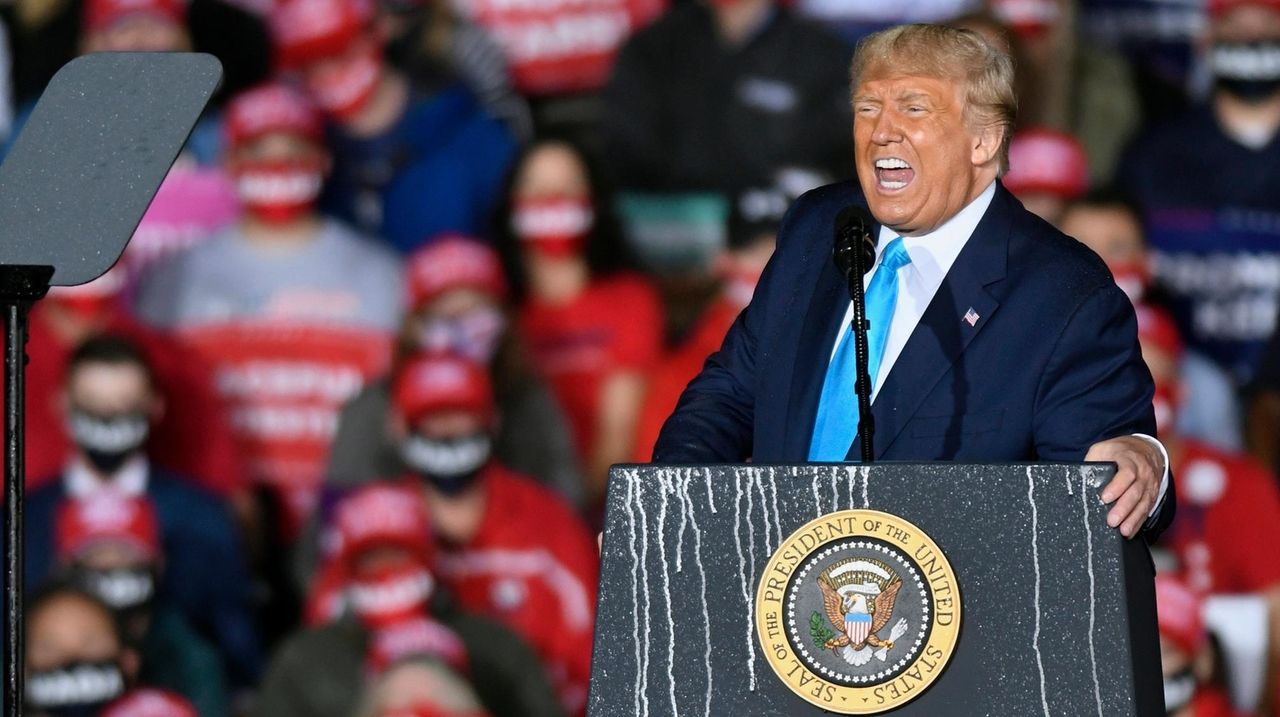 Newsday is opening this story to all readers so Long Islanders have access to important information about the coronavirus outbreak. All readers can learn the latest news at newsday.com/LiveUpdates.

It appears to be the case that the first time the White House was the first to confirm a positive coronavirus tests in the administration was Trump’s tweet about his own positive test early Friday morning.

The diagnosis immediately destabilized a broad range of institutions and efforts. Stock futures dropped by hundreds of points. Questions immediately arose about possible succession plans or preparations. Trump’s ongoing re-election campaign lost its candidate for some to-be-determined period — and lost any hope of redirecting the race away from the ongoing pandemic.

That instability will only be heightened by the long track record of obscuring or misrepresenting health information related to the president.

During the 2016 campaign, there were ongoing questions about Trump’s health, given his advanced age. (He was the oldest person ever to be inaugurated as president.) Presidential campaigns generally release health records in an effort to assuage any such concerns, but the document released by the Trump campaign was bafflingly effusive.

“If elected,” it read at one point, “Mr. Trump, I can state unequivocally, will be the healthiest individual ever elected to the presidency.”

It later emerged that the doctor who’d signed the letter had simply signed something dictated by Trump or his team. That doctor, Harold Bornstein, later claimed that people working for Trump had seized the president’s medical records shortly after the president took office.

Once in office, this uncertainty continued. Trump’s first physical, conducted by then-White House physician Ronny Jackson, determined that Trump was just tall enough and just light enough not to be categorized as obese.

“He has incredible genes, I just assume,” Jackson said at a news briefing, echoing Trump’s own descriptions of his own vitality. “Based on his cardiac assessment, hands down, there is no question he is in the excellent range,” the doctor said at another point — though he doubled the president’s cholesterol medication.

Most curious was Trump’s unexpected trip to Walter Reed National Military Medical Center in Bethesda, Md., last November. Then-press secretary Stephanie Grisham waved the unannounced trip off as Trump “taking advantage of a free weekend” to get the first part of his annual physical out of the way.

He never completed that physical at Walter Reed. This summer, after questions about his health arose following a speech at the U.S. Military Academy at West Point, the White House released a summary of his physical asserting that the procedure had been completed at the White House. Trump, though, later claimed that the November visit to Walter Reed was the conclusion of his physical.

The New York Times’s Michael Schmidt reported that the trip may have been centered on something more significant.

“(I)n the hours leading up to Trump’s trip to the hospital,” Schmidt reported, “word went out in the West Wing for the vice president to be on standby to take over the powers of the presidency temporarily if Trump had to undergo a procedure that would have required him to be anesthetized.”

Pence later said that he didn’t recall any such order.

All of this contributes to an unusual amount of uncertainty about the president’s health in a normal moment. Now, with Trump having contracted COVID-19, a dangerous and mostly untreatable disease — in the middle of his re-election campaign, no less — it becomes far more problematic.

It will be difficult to take at face value any assertions about Trump’s condition as the disease runs its course. It will similarly be difficult for Trump to resist wanting to return to the campaign trail, regardless of how he’s feeling or how contagious he might be. If the White House assures the public that Trump’s been cleared to once again hold fundraisers or to resume his regular schedule, one would be justified in treating that claim with skepticism. Any assertion about Trump’s health will need to clear a higher bar for confirmation than normal given how often the administration has both obscured information about Trump.

And, of course, because of its willingness to pressure health experts in particular to offer optimistic assessments about the pandemic. Over and over, the government agencies running the response to the pandemic have faced pressure from the White House to make the situation seem less stark. Pressure to limit the number of tests being completed or to make it easier to open schools has increased skepticism about any pronouncement from the government.

One has to wonder what would have happened had Bloomberg not uncovered Hicks’s positive test, which was conducted Thursday morning. The president continued his schedule as normal despite her diagnosis — and despite perhaps not feeling 100 percent himself, according to Bloomberg’s Jennifer Jacobs. That included a closed-door fundraiser at Trump’s private club in New Jersey on Thursday. Business as usual, as best he could.

If the Hicks diagnosis hadn’t become public, when, if ever, would we have learned about Trump’s?

Philip Bump wrote this piece for The Washington Post.