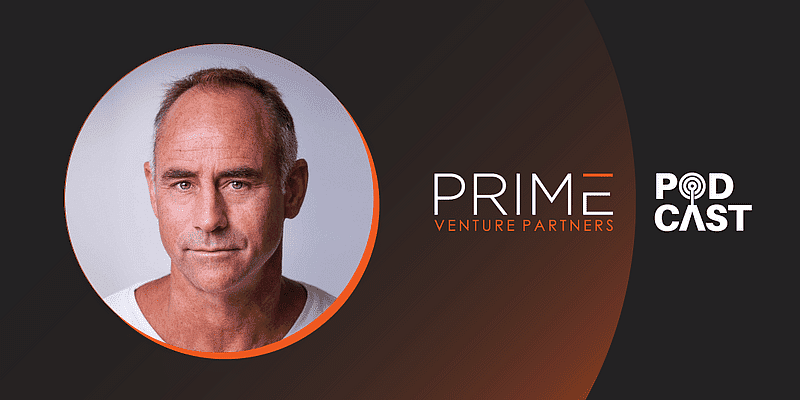 Paddy Upton is a familiar face in the world of cricket. Renowned for his role as the Mental Conditioning and Strategic Leadership Coach of the Indian Cricket Team, he led the team to a World Cup victory in 2011.

Ever since, Paddy served as the head coach to the many different T20 teams in leagues like IPL and Big Bash, ratching up many notable records along the journey. Today, Paddy is working as a Professor of Practice at the Deakin University, Melbourne, Australia to help design their leadership courses.

In this week’s episode of Prime Venture Partners podcast, a series featuring the makers and doers of the startup ecosystem, Amit Somani, Managing Partner of Prime Venture Partners, engages in an insightful conversation with Paddy to touch upon the lesser talked about topics of pressure, fear, willingness to learn, and picking a leader. He also draws comparisons to entrepreneurship.

During the initial days in the Indian cricket team, Paddy shared the space with coach Gary Kirsten in 2008, a time when the team had ‘very talented players’. The duo had the task to take the Indian team to become the number one test team and win the 2011 World Cup.

Talking about this goal, he says, “We already had great players. We just needed to harness their intelligence and create magic together.”

At a time when there was no concept of a mental performance coach in cricket, Paddy was creating the role with time, primarily focused on supporting leadership. He supported Gary through his coaching, handling the changing leadership of the team.

Paddy was also helping them individually to navigate mental challenges. He says, “the pressure of the big moment and fear of failure were probably the two the biggest mental obstacles to success.”

Entrepreneurship, sports and the fear that tags along

While victory is the key goal for sportspersons, sustained growth remains the key for entrepreneurs. But in both cases, there is an immense fear of not meeting expectations and finding a bump on the road.

According to Paddy, athletes and entrepreneurs have a very similar approach when it comes to fear. While it is good to assess all the potential things that could go wrong, he believes that one should examine the processes and contingencies that can be put in place, should that potential scenario unfold.

“The secret to addressing fear is to understand the anatomy of it. We need to grasp that we are actually creating a concept and overthinking it. It is okay to think about what all could go wrong. But then we have to bring ourselves back to the present and plan contingencies for the same,” he adds.

When asked about the cultivation of mental fitness, Paddy says that there are two key elements in the concept.

“One is the short-term element in terms of executing accurately with our mental skills. The other is the long-term element, which is working on the individual’s self-esteem.”

Short-term elements like focus, concentration and confidence are variable according to Paddy. For example, if you win, you gain confidence, but if you lose, it all comes crashing down.

However, Paddy believes in the long-term elements like self-esteem, and working on this helps people dig into their foundations.

“A strong sense of self-esteem does not go up and down with results. We should win because we want it and not just to look good. This creates the toughness that we all want,” he says.

Pressure to perform, fear of losing

In 2011, India emerged victorious in the ICC Cricket World Cup, making it the first team to win the finals on home soil. However, tackling the pressure and fear did not begin on the morning of April 2, but 10 months earlier during the Asia Cup Final in Sri Lanka.

“Gary and I got the team in and asked if this was the World Cup final, are we ready to go out in the field and play? The answer was a collective no,” Paddy recalls.

Since then, in every team discussion before a match, Paddy made it a point to ask this question imitating the feeling of playing like it was the actual World Cup match. When the day arrived, it felt like they’d been here so many times before, that they didn’t feel that much pressure.

Many players had their own motivation to win that match, not for themselves, but to honour their legendary teammate Sachin Tendulkar for his service to Indian cricket. While the pressure of thousands of fans lay on the team, Paddy reframed that feeling into a positive thought.

“Imagine you’re walking onto a field with many hundreds of millions of fans actually holding you by the hand, walking out in full support. That just really reframed feeling comfortable playing in front of such large fans both on television and live,” he says.

While Paddy elucidated the concept of picking players from a cricket perspective, he also mentions that it can draw parallels into the business world as well.

While it goes unsaid that the primary criterion is performance, Paddy bases his choice on the valued metrics of personality. While relying on a trusted person can be useful, Paddy reminds us that we’re all human and flawed. But as long as the player has all the right ingredients – talent and good personality – then the job is done.

When it comes to leadership, Paddy Upton stresses on having a leadership team rather than dumping all the responsibilities on one individual – the captain of the team.

“The leader must be able to harness collective intelligence and inputs and then direct the proceedings,” he concludes.

You can listen to the podcast here.

India’s most prolific entrepreneurship conference TechSparks is back! With it comes an opportunity for early-stage startups to scale and succeed. Apply for Tech30 and get a chance to get funding of up to Rs 50 lakh and pitch to top investors live online.