Why a treatment used for over a century on diseases like measles, mumps and influenza could work to treat the new coronavirus strain.

A team of researchers, including two from the University of Wisconsin-Madison, has solved a long-running biological mystery, reporting the discovery of the first two viral relatives of rubella, also known as German Measles.

“Rubella was this lone wolf, this mystery, this virus that never had any relatives,” said Tony Goldberg, an epidemiologist at UW, who maintains a research project in Uganda’s Kibale National Park. It was at Kibale that one of the two new viral relatives was found in the aptly named cyclops leaf-nosed bat. The bat virus has been named ruhugu.

Goldberg and his former doctoral student Andrew J. Bennett teamed up with U.S. and German researchers to report the two rubella relatives in a paper published Wednesday in the journal Nature.

The German researchers discovered the second relative of rubella, a virus called rustrela.

Rustrela was found at an unidentified German zoo in three animals — a donkey, a Bennett’s tree-kangaroo and a capybara, the largest rodent in the world. All three zoo animals died after suffering severe neurological disease. The virus also was found in yellow-necked field mice in and around the zoo. The mice appear to have remained healthy. 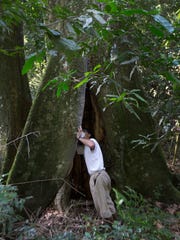 UW-Madison scientist Tony Goldberg peers inside a tree where bats live and where filtered air samples were taken in the Kibale National Park in Uganda in January. The sample was to be analyzed for pathogens. (Photo: Mark Hoffman/Milwaukee Journal Sentinel)

The major rubella breakthrough comes at a time when interest in the nature of viruses and in the threat they pose is perhaps higher than ever because of the coronavirus pandemic.

“Rubella is more of an orphan virus because so few people work on it,” said Roberto Cattaneo, a researcher and measles expert at the Mayo Clinic in Rochester, Minn.

Cattaneo, who was not involved in the study, called it “great work,” adding “I think this will sure help with understanding the fundamental virology of rubella.”

The discovery of the two rubella relatives may also aid efforts to develop treatment for more than 100,000 babies around the world stricken each year with congenital rubella syndrome.

The syndrome, in which the virus passes from mother to fetus during pregnancy, can result in the baby suffering loss of hearing, loss of sight, heart disease or other birth defects.

Many cases of congenital rubella syndrome result in stillbirths, miscarriages and fetal malformations. 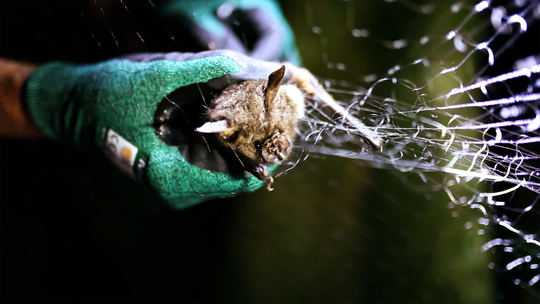 The rubella vaccine was approved for widespread use in 1969, and infections then declined rapidly. In 2004, the Pan American Health Organization declared rubella eliminated from the U.S. The disease is no longer spread year-round in the Americas region or the United States.

The UW discovery began with Bennett’s interest in a species of bat that had not been a major target for virus-hunters. For one thing, cyclops leaf-nosed bats roost in trees, not caves, making them more difficult to find and capture.

At the field station in Kibale, Bennett investigated the hollow trees in the forest and began to identify different roosts. He then ventured out to the trees exactly at dusk, which is when the bats leave their roosts.

In 2017, he caught bats using a net and took saliva samples. DNA from the samples was then analyzed at the Naval Medical Research Center in Frederick, Maryland, where Bennett now works as a research scientist.

Early in 2019, Bennett received a text from one of the scientists in Maryland who had analyzed the bat DNA. The bat had a virus that appeared similar to rubella.

“It blew my mind,” Bennett said. “Rubella has been so impactful to humans. The fact that it had no close relatives was actually unique among all viruses.”

As he and Goldberg were preparing to publish their discovery, they learned that the team in Germany had found another rubella relative, and the two groups decided to collaborate on a single paper.

Bennett said he believes researchers will now start to find other rubella relatives.

He said a key region of the rubella virus and its two relatives is very similar. It happens to be the region of all three viruses that binds onto the cells of the infected hosts.

At present, Goldberg said, there is no evidence that the bat virus has spilled over into other species.

“But that region of rubella looks very similar to our bat virus,” he said, “similar enough that we should not dismiss the possibility.”