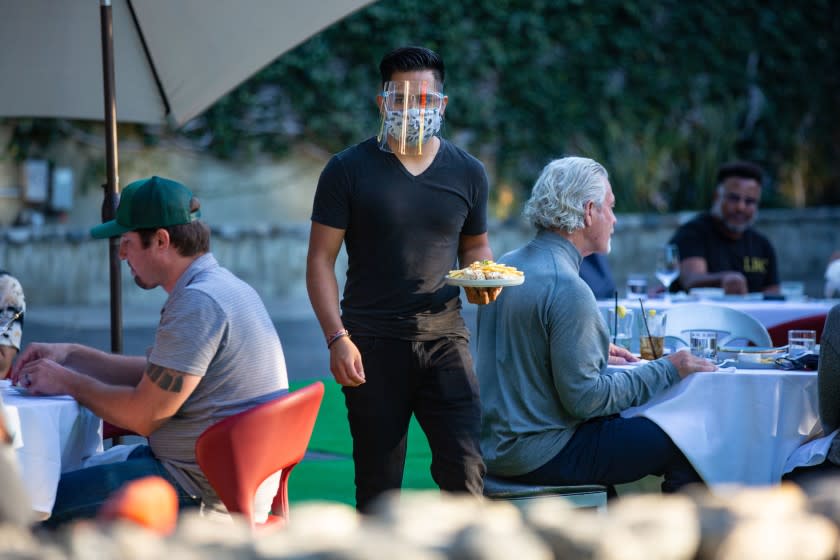 It’s a metric that comes up often in conversations about reopening the economy in California, a passport to a more normal life amid the COVID-19 pandemic.

Businesses’ fates depend on it. In many counties, it is all that stands in the way of people being allowed to dine indoors at restaurants, watch movies on the big screen and sweat through spin classes at the gym.

Under California’s latest reopening plan, state officials require that counties meet certain benchmarks before allowing more businesses to unlock their doors and welcome customers. Counties from Los Angeles to Butte and Sonoma to San Bernardino have stalled trying to log seven or fewer new cases of coronavirus per 100,000 residents each day.

The mouthful of a metric — known as the adjusted case rate — represents how many people are falling sick every day in a county.

The standard is part of the state’s attempt to strike a delicate balance that will avoid a surge in cases as restrictions are loosened. Ideally, if transmission is low enough, small increases in spread due to more businesses being open won’t overwhelm the healthcare system.

“All of these concepts and approaches emanate from this notion of slow and stringent … so we don’t end up having to move back later,” California Health and Human Services Secretary Dr. Mark Ghaly said at a recent briefing.

But what exactly the threshold should be is a bit of a guess, experts say, since no one really knows what constitutes a safe level of transmission for reopening.

In late August, Gov. Gavin Newsom unveiled a new system for reopening that assigns each county a tier based on how widespread transmission is. The tier corresponds to what is allowed to reopen. Counties can move to a less-restrictive tier by meeting benchmarks showing that spread has been reduced for two weeks in a row.

Sacramento County, for example, was long stuck in the purple tier — the most restrictive — in which most businesses deemed nonessential are either closed or allowed to operate only outdoors.

But last week, the state announced that the county had for the first time reduced its number of new daily cases to fewer than seven per 100,000 residents. If Sacramento keeps up its progress, it could move into the red tier this week, allowing it to immediately restart indoor operations (with restrictions) at gyms, restaurants, museums, churches and other facilities, said Dr. Olivia Kasirye, the county’s public health officer.

“We’re hoping and anticipating that we will officially move to the red tier,” Kasirye said in an interview.

The current state system largely relies on just two metrics: the case rate and the positivity rate, which is the percentage of tests for the virus that come back positive.

To move from the purple tier to the red tier, a county’s positivity rate must be 8% or lower, while its daily case rate is seven or fewer per 100,000 residents. These numbers are in part estimates, said UC San Francisco epidemiologist Dr. George Rutherford.

“It’s all arbitrary,” Rutherford said. “There’s not some page in an epidemiology textbook that you could point to and say, ‘This is how you do this.’ … We’re learning as we go along.”

In the most recent week for which data were released, Kern County logged 6.3 cases per 100,000 residents each day. Yet the state recalculated Kern’s rate to account for the county’s less-than-average amount of testing. That boosted its case rate to 7.2, above the threshold for moving to a lower tier.

By contrast, Los Angeles County’s case rate was dropped from 7.7 to 7.0 because of extensive testing.

Based on these adjusted rates, 11 counties, including Ventura, Kern and Monterey, are stuck in the purple tier with a case rate above 7.0, though their positivity rate is below 8%. San Diego County, in the red tier, recently was close to moving back into purple because its case rate had begun to climb above 7.0.

Despite its recent drop to 7.0, L.A. continues to struggle with its case rate. L.A. County public health director Barbara Ferrer said she anticipates that an increase in the case rate will disqualify the county from moving forward with reopening when new figures are released Tuesday. The positivity rate has been below 3%, but the case rate will likely not stay in line, she said.

“The issue that’s been most difficult for us … has been that daily case rate; we had to get the adjusted rate down to seven new cases per 100,000 people,” Ferrer said Monday.

The fact that counties keep meeting the positivity rate requirements but not the case rate standards is by design, Ghaly said. As counties increase their testing, their positivity rates will typically begin to drop, he said. Once testing has increased, counties are able to use the cases identified for contact tracing and isolation, to ultimately reduce transmission.

“Watching all of that come together, it’s actually moving as we’ve hoped — that the test positivity comes down a little bit sooner than the case rate, and that allows counties to move forward with some degree of confidence to the next tier,” Ghaly said.