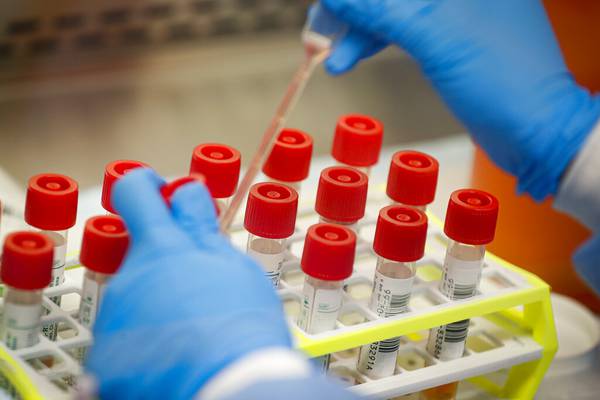 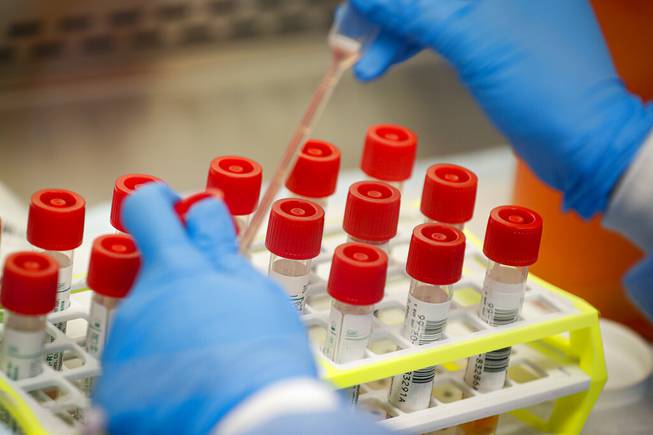 In this Wednesday, March 11, 2020 photo, a technician prepares COVID-19 coronavirus patient samples for testing at a laboratory in New York’s Long Island.

The state health department has ordered Nevada nursing homes to suspend the use of certain rapid COVID-19 tests because of the likelihood of false positives.

According to an Oct. 2 memo from the state Division of Public and Behavioral Health, the rapid antigen tests are showing that they have a high tendency to produce false positives despite earlier statements from the Food and Drug Administration that if they produced any inaccurate results, they would lead to false negatives.

The FDA added that follow-up testing should be done on negatives, not positives.

However, state public health officials issued guidance to the contrary, which led to data showing 60% of a sample of positives being false.

The wrinkle comes down to the typical application of antigen tests, symptomatic versus asymptomatic test subjects, and unique nursing home protocols.

Because there’s a threshold for receiving medical care, a person who received a false negative — meaning they do in fact have the coronavirus — would have to battle the bug at home anyway if symptoms are mild, Pandori said; this presumes sick patients would self-isolate to avoid spreading whatever illness they think they have.

If the symptoms progress enough, those people would still go to the hospital, whether they thought they had COVID-19 or not.

“If you started to have so many bad symptoms that were COVID-related that you needed to be hospitalized, you’d get treated as if you had COVID even without a COVID test result, because that’s how serious the symptoms are,” he said.

Meanwhile, nursing home residents with positive results would be placed into isolation with others who have tested positive. This is a strategy known as “cohorting,” and it has proven effective in slowing the spread of the virus within facilities, said Department of Health and Human Services spokesperson Shannon Litz.

However, false positives would then be placed in wards with people who are actually sick with the potentially fatal disease, leading them into the mouth of the coronavirus beast.

The antigen tests in question, which hit Nevada nursing homes in August, are point-of-care tests, meaning they’re administered and analyzed in the same place. Results return in minutes.

They’re given as nasal swabs and pretty easy — but not that easy — to run, Pandori said.

They also have an intended use.

Antigen tests are generally used on symptomatic people to test a hunch in the presence of symptoms, Pandori explained. For example, well-established rapid tests for flu are also antigen tests, and generally only given when a sick patient presents flu-like symptoms.

“We don’t use antigen tests willy-nilly to screen asymptomatic people to see if they have the flu,” he said. “If you think we’re going to do that with COVID-19, well, you can see what the consequences might be.”

The state caught the false positives by running follow-up, confirmatory Reverse-Transcriptase Polymerase Chain Reaction tests on people who initially tested positive. This was counter to the initial FDA guidance, the public health officials said in their memo.

The diagnostic PCR tests seek out the specific genomic fingerprint for SARS-CoV-2, the virus that causes COVID-19, and are considered the gold standard for accuracy. Antigen tests scan for a protein associated with SARS-CoV-2, and are lower-cost than PCR tests.

“The Food and Drug Administration … reported these (antigen) tests as having a high specificity and moderate sensitivity. This means that these antigen tests are accurate for detecting individuals with COVID-19, but less accurate for correctly detecting when someone does not have COVID-19,” the state memo read.

“The recommendation from the FDA is not to confirm positive antigen results as they are likely to be true positives, but to perform confirmatory molecular testing on negatives as false negatives may occur,” continued the memo, which Pandori signed along with state chief medical officer Dr. Ihsan Azzam and Public and Behavioral Health Administrator Lisa Sherych.

“However, this was based on extremely limited data. Despite the sensitivity and specificity data provided to the FDA, DHHS recommended to perform confirmatory testing on all positive tests.”

The state issued this guidance in late August. By mid-September, it started receiving “anecdotal” reports from nursing homes that residents with positive antigen tests showed negative when re-tested with RT-PCR tests.

Twelve facilities used the antigen tests, resulting in 60 positives out of 3,725 tests. Eight of those facilities collected additional specimens for follow-up tests.

The state did not identify the 12 facilities nor any effects on the residents with false positives.

Possible reasons for the conflicting test results include inadequate training on the testing procedure and “lack of compliance with the manufacturer’s protocols,” the memo stated.

State medical officials will pull the tests and “further investigate the issue of discordant results between” antigen and PCR testing before issuing updated guidance.