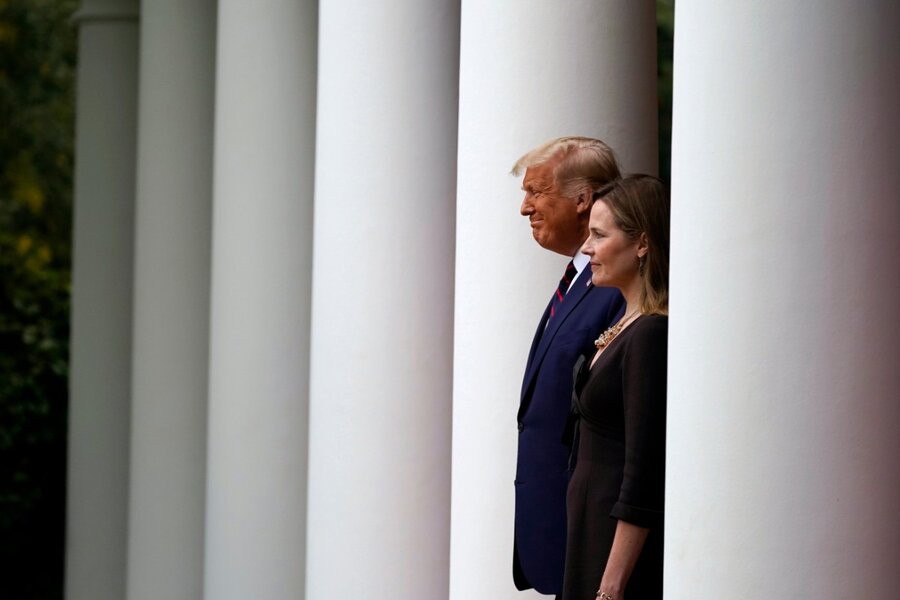 In remarks on Sunday, the former vice president sidestepped any talk of expanding the court (from 9 to 15 justices) to counter conservative gains should he defeat President Donald Trump in November and Democrats regain a Senate majority. Biden called that scenario a distraction from the practical effects that Trump’s nominee, conservative federal Judge Amy Coney Barrett, could have if she succeeds the late liberal Justice Ruth Bader Ginsburg.

“They see an opportunity to overturn the Affordable Care Act on their way out the door,” Biden said, speaking near his Delaware home. “The Trump administration is asking the Supreme Court right now, as I speak, to eliminate the entire Affordable Care Act.”

Biden repeated his calls that the Senate delay confirmation proceedings until after the Nov. 3 election, moving ahead then if Trump wins another term or awaiting a nomination from Biden if the Democrat prevails.

The focus on health care reflects the Democrats’ larger strategy in recent days. They tacitly concede Republicans are likely to confirm Barrett, giving conservatives a 6-3 court majority. So, rather than fight a losing battle, as they did with Justice Brett Kavanaugh’s 2018 confirmation, Democrats want to raise the pressure on Republicans by focusing on how a conservative supermajority of justices might affect Americans’ everyday lives.

Justices are scheduled on Nov. 10, a week after Election Day, to hear another challenge of the 2010 health care law. Biden noted the court has twice upheld the law, a signature achievement of President Barack Obama’s and Biden’s White House tenure. But those were divided rulings, with Ginsburg in the narrowest of majorities.

“President Trump could claim all he wants that he is going to protect people with pre-existing conditions. But the fact is he’s already fighting to take those protections away,” Biden said, later reading from the administration’s brief before the court.

He listed several common conditions, including heart damage and other effects from the coronavirus that is still spreading, that could keep millions of Americans from qualifying for coverage if the law is gutted completely.

On Barrett, Trump on Sunday told reporters that it’s going to be hard for Democrats “to dispute her qualifications or anything about her.”

Later in the day, Biden’s only direct critique of Trump’s nominee referred back to her writings as a University of Notre Dame professor, before she ascended to the federal bench in 2017.

“Prior to going on the bench, she publicly criticized Chief Justice Roberts’ opinion upholding the law,” Biden noted.

Barrett questioned John Roberts’ reasoning that Congress’ constitutional power to tax gave it authority to pass most of the law’s provisions, especially the IRS penalty on individuals who didn’t buy health insurance. Conservatives insist the legislation was not reasonably a taxation bill. Congress has since, while under Republican control, scrapped the tax penalty, hoping to undercut Roberts’ hook that upheld much of the statute.

Some progressives want Biden to threaten Republicans with scrapping the Senate filibuster altogether and expanding the Supreme Court with a slate of liberal appointees. Republicans have tried to use the issue in competitive Senate races and against Biden. He declined Sunday to take the bait on court expansion.

“What I’m not going to do is play the Trump game, which is a good game he plays to take your eye off the issue before us,” Biden said. “I am focused on making sure the American people understand that they are being cut out of this process … in order to take away the ACA and your healthcare in the midst of a pandemic.”

No justice has ever been confirmed to the Supreme Court so close to a presidential election with early voting already underway in some states. Republicans believe the fight ahead will boost voter enthusiasm for Trump and Senate Republicans at serious risk of losing their majority. Democrats warn Barrett’s confirmation would almost certainly undo Americans’ healthcare protections as the high court takes up a case against the Affordable Care Act in fall.

According to a national poll by The New York Times and Siena College that was released Sunday, a clear majority — or 56% — of voters believes the winner of the Nov. 3 presidential election should fill Ginsburg’s seat, vs. 41% who said Trump should as the current president. Biden has said he would nominate the first Black woman to the court, but has not released the names of his potential choices.

The poll, which was conducted Sept. 22-24, had a margin of sampling error of 3.5 percentage points.

House Speaker Nancy Pelosi declined to say Sunday whether Barrett, a judge on the U.S. Court of Appeals for the 7th Circuit, is qualified to serve. But she argued that Trump was moving quickly to fill the vacancy before the court hears a challenge to the Affordable Care Act on Nov. 10.

“It’s not about this justice. It’s about any justice he would appoint right now,” Pelosi said on CNN’s “State of the Union.” “What I am concerned about is anyone that President Trump would have appointed was there to undo the Affordable Care Act.”

“The Senate will confirm her next month,” declared Sen. Tom Cotton, R-Arkansas, on CNN.

Other Republican senators say a post-election confirmation vote is also possible. The GOP will continue to control the Senate in the lame duck period between the election and inauguration.

“But I think we’re likely to get this done sometime in the month of October.”

The confirmation battle will be featured in a new $10 million RNC digital ad campaign to encourage battleground state voters to return vote-by-mail ballots or go to the polls. The national party, in concert with President Trump’s campaign, is planning local events and protests across the country to support Barrett’s confirmation as well.

The party is also incorporating Barrett’s nomination into its scripts that staffers and volunteers use when calling or knocking on voters’ doors, with a focus on social conservative Catholic and evangelical voters — particularly in swing states like Wisconsin, Pennsylvania and Florida.

Filling the vacancy created by the death of  Ginsburg has been an unexpected political opportunity for Trump, who won the White House in 2016 in large part because conservatives were animated around filling the seat opened by the death of Justice Antonin Scalia.

The RNC on Saturday unveiled a website, ConfirmBarrett.com, to allow supporters to contact lawmakers to urge them to put Barrett on the court. It also anticipates trying to fundraise off the confirmation fight, including Democratic vice president nominee Kamala Harris’ position on the Senate Judiciary committee.

“With a full-throttled effort from now until President Trump’s nominee is confirmed, our teams will expose Democrats’ partisanship, aggressively promote the qualifications of Judge Barrett, and use this issue to galvanize voters to the polls in November,” said RNC Chair Ronna McDaniel.

Get the Monitor Stories you care about delivered to your inbox.