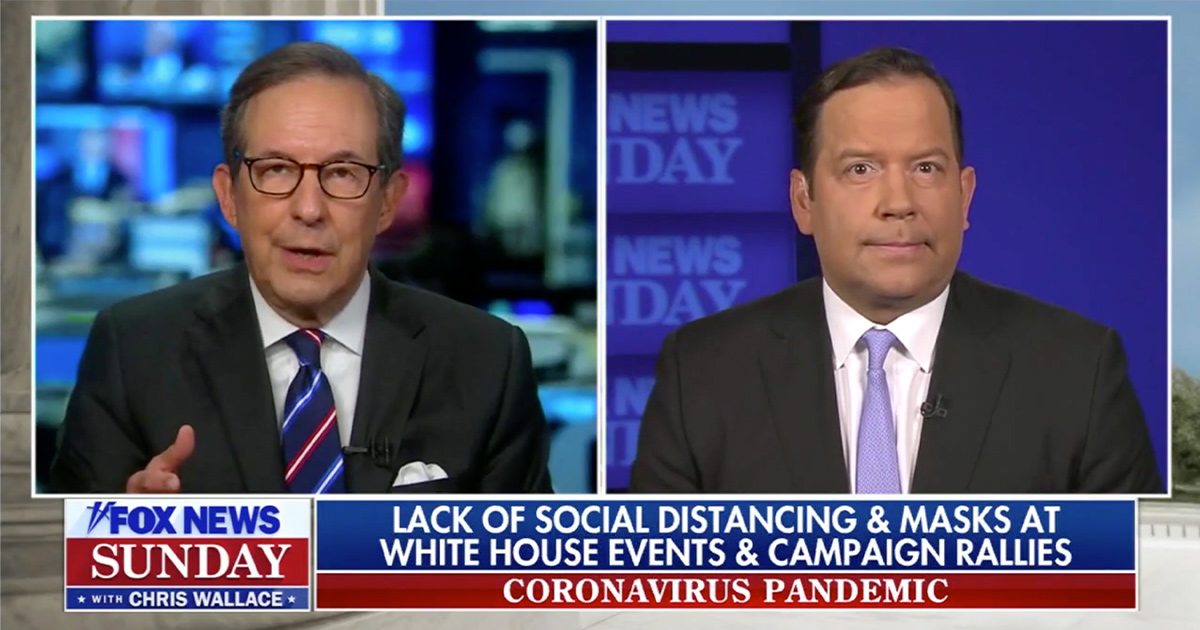 Fox News’ Chris Wallace confronted Trump 2020 senior adviser Steve Cortes Sunday over the fact that members of the Trump team took off their masks during last week’s debate despite being asked not to.

Cortes argued the fact that Trump got the coronavirus shows us “even the most severe of lockdowns cannot completely stop the virus, therefore we should take reasonable precautions as a society and we should not, as Joe Biden threatens, even think about shutting this economy and this society down again.”

Wallace pointed to the debate he moderated last week and how the president’s team just flouted the rules:

“The rules from the Cleveland Clinic could not have been more clear. Everyone — everyone in the audience — was to wear a mask. The president and the former vice president and I were the only ones exempt from that. We’ve got a picture up on the screen. After the First Family came in, they all took off their masks. So did the White House chief of staff Mark Meadows. Do they think that the health and safety rules for everybody else do not apply to them?”

Cortes pointed to how they were tested before coming into the debate hall.

“Steve, it doesn’t matter,” Wallace jumped in. “Everybody that was in that room was tested, and the Cleveland CLinic’s regulation was it didn’t matter, everybody except for the three of us was to wear a mask and people from the Cleveland Clinic came over and offered the first family masks, thinking maybe they didn’t have them. They were waved away.”

Wallace noted how the debate commission has said if this happens at future debates, people will be escorted out.

“Everybody was tested beforehand… Everybody was told to wear a mask. Why did the First Family and the chief of staff feel that the rules for everybody else didn’t apply to them?” Wallace asked again.

Cortes tried to defend the president on the issue of mask-wearing but also said, “We also believe in some element of individual choice.”

Wallace jumped in to again emphasize that this was an explicit rule established for everyone to follow and they continued clashing back-and-forth.

You can watch above, via Fox News Sunday.

Have a tip we should know? [email protected]