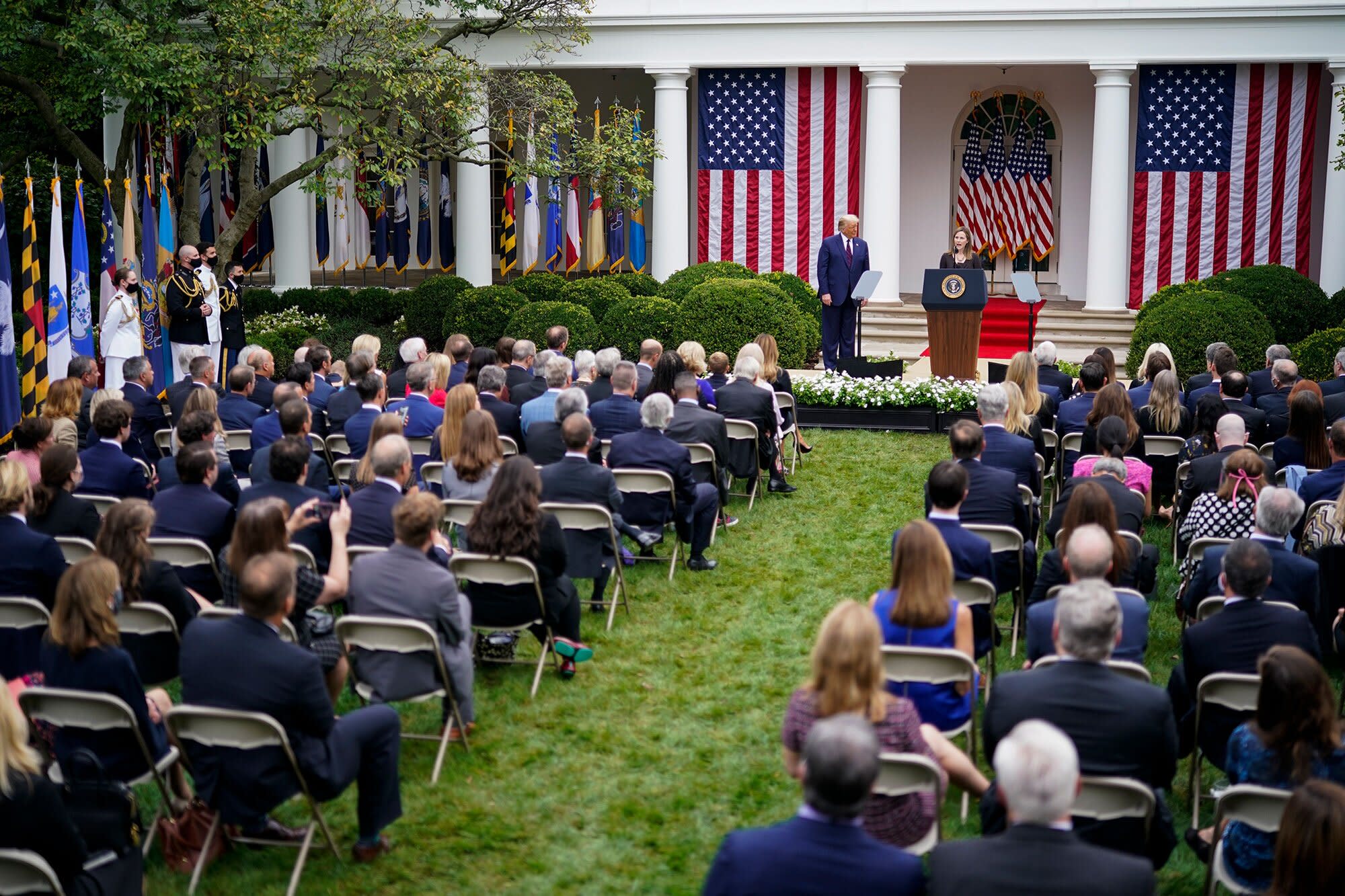 Jabin Botsford/The Washington Post via Getty Images Judge Amy Coney Barrett (at podium) speaks in the Rose Garden of the White House on Sept. 26, 2020, as President Donald Trump announces her nomination for associate justice of the Supreme Court.

The White House reportedly turned down an offer from the Centers for Disease Control and Prevention to assist with contact tracing following a Sept. 26 event for Supreme Court nominee Amy Coney Barrett, despite more than 10 guests there — including President Donald Trump — all testing positive for the novel coronavirus (COVID-19).

Contact tracing is a “fundamental” step in identifying “who may have been infected through exposure to” a COVID-19 patient, federal health experts say.

“This process prevents further transmission of disease by separating people who have (or may have) an infectious disease from people who do not,” according to the CDC, the country’s leading health agency. “It is a core disease control measure that has been employed by public health agency personnel for decades.”

But, according to CNN and USA Today, the White House declined the CDC’s offer to help.

The New York Times also reported that the White House declined to involve the CDC and has decided not to do any tracing of the possible virus among event attendees. Rather, administration officials were focusing on the two days before the president tested positive on Thursday.

A White House spokesman disputed that they aren’t doing contact tracing more broadly but wouldn’t answer questions about which events they’ve included, such as the Sept. 26 festivities.

The spokesman, Judd Deere, insisted that the White House and CDC work together, citing “integration” with the White House doctors that an administration official said was a CDC epidemiologist assigned to the West Wing.

“The White House has plans and procedures in place that incorporate current CDC guidelines and best practices for limiting COVID-19 exposure and has established a robust contact tracing program led by the White House Medical Unit with CDC integration,” Deere said in a statement to PEOPLE.

Deere tells PEOPLE the White House’s internal contact tracing process is handled by the medical unit and is “consistent with” CDC guidelines.

“Appropriate notifications and recommendations have been made,” he said, though he did not clearly explain if the White House’s medical staff performed contact tracing for any individuals at the Sept. 26 event. He would not answer questions about which dates they have reviewed or whom they’ve contacted.

The Times reports that White House officials “cut” the CDC out of its in-house contact tracing process.

The timeline and ultimate source of the infections that have since spread through the White House — and beyond — remains unclear and may never be entirely knowable. But contact tracing would provide crucial information toward figuring it out as well as alerting anyone else who may have passed on the virus.

The Sept. 26 event was held outside in the Rose Garden and included people sitting closely together, many of whom were also in physical contact and not wearing masks. There was also an indoor reception.

In addition to the event on Sept. 26, the president attended a campaign event last Wednesday and a fundraiser in New Jersey only hours before he tested positive. The president and first lady attended a reception for gold star families on Sept. 27 and the president was also at the Tuesday debate with Joe Biden, though Biden and moderator Chris Wallace have since tested negative.

Beyond the Rose Garden, other people around Trump have said the White House’s contact tracing efforts have been lacking — as though, in the eyes of some, the administration would prefer to ignore the problem entirely.

On Monday, Times reporter Michael D. Shear identified himself as one of the individuals who has since tested positive for the COVID-19 respiratory illness after traveling with the president on Air Force One to Pennsylvania last Saturday night.

“I have not been contacted by the White House,” Shear told CNN on Monday. “Nobody from the White House has said ‘boo’ and asked anything about where I was or who I talked to or who else I might have infected.”

Gov. Christie, 58, said Saturday that he had checked himself into a Morristown, New Jersey, hospital after getting infected, while Sens. Thom Tillis and Mike Lee entered quarantine amid their recovery.

Trump was hospitalized for three days at Walter Reed National Military Medical Center, but his doctors said he was well enough Monday night to continue treatment back at the White House. They said he may “not entirely be out of the woods,” however.

Once admitted to Walter Reed hospital over the weekend, the president was given steroids that health experts say are typically only given to patients with severe reactions to the respiratory illness. He also received supplemental oxygen and an experimental antibody treatment.

Kellyanne Conway’s husband, George Conway, a prominent anti-Trump Republican attorney, said on social media that the White House’s negligence in notifying attendees about the potential outbreak left him and his family in the dark.

“I would be out at CVS getting more Theraflu for my wife for what we would have thought was a cold,” George wrote.

“Claudia & I are faring well in quarantine,” Kellyanne tweeted Monday, noting that everyone else in their family besides she and her daughter had tested negative.