McEnany’s disclosure shows the limits of daily testing in halting the spread of the coronavirus that causes COVID-19. A person might have such small traces of the virus after exposure a case isn’t identified until days later, even using the most accurate and sensitive tests.

It’s “what we call a window period: that’s the period after you get infected and before you test positive,” said Dr. Richard Scanlan, chair of the College of American Pathologists Council on Accreditation.

The widening outbreak of people connected to President Donald Trump brings new scrutiny to the White House’s strategy, which relies on testing everyone who comes in close contact with the president. But experts say a coronavirus test is a just snapshot at any given moment.

Some public health experts criticize the White House for putting so much weight on frequent testing. Test specificity ranges across the board – some need only small amounts of virus particles to produce a positive result, while others require tens of thousands of particles. 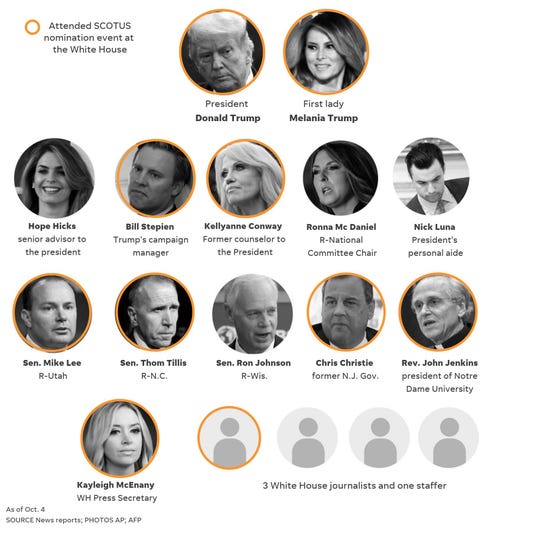 The most sensitive type of test is polymerase chain reaction, or PCR, which amplifies a small amount of DNA sample from a nasal swab. PCR tests are usually conducted at labs and can take days to process, but some portable machines can deliver results in less than one hour.

PCR tests can usually detect a virus four days after a person is infected, Scanlan said.

Antigen tests, which detect proteins of the coronavirus, are less expensive and deliver results more quickly than most types of PCR tests.

But antigen tests are less sensitive than PCR tests and often don’t detect an infection until about seven days after a person has been infected, Scanlan said.

A person who becomes sick typically develops symptoms four or five day after exposure. But symptoms can can range from two to 14 days after infection, and many people never get sick.

COVID-19 widespread testing is crucial to fighting the pandemic, but is there enough testing? The answer is in the positivity rates.

More: ‘Totally unacceptable’: Testing delays force labs to prioritize COVID-19 tests for some, not others

The White House has employed rapid coronavirus tests since March. But more rapid tests using different technologies have emerged since the spring, giving the White House’s medical team a menu of options for quickly testing. It is unclear what test was used for McEnany.

A person in the beginning stages of the disease also may not have enough viral load to show a positive result but can still be infectious.

Dr. Lewis Nelson, professor and chair of emergency medicine at Rutgers New Jersey Medical School, said tests can only definitively tell a person they were negative the moment they took that test. In the time it takes to receive results, the person could have been exposed.

“It’s a total slice in time that in that moment you’re negative,” he said. “The moment your test comes back negative, you are no longer negative.”

The U.S. Centers for Disease Control and Prevention recommends 14 days of quarantine after coming in close contact with an individual who has suspected or confirmed COVID-19, regardless of a positive or negative test result.

President Trump has frequently refused to wear a mask and even chided former Vice  President Joe Biden for always wearing one.