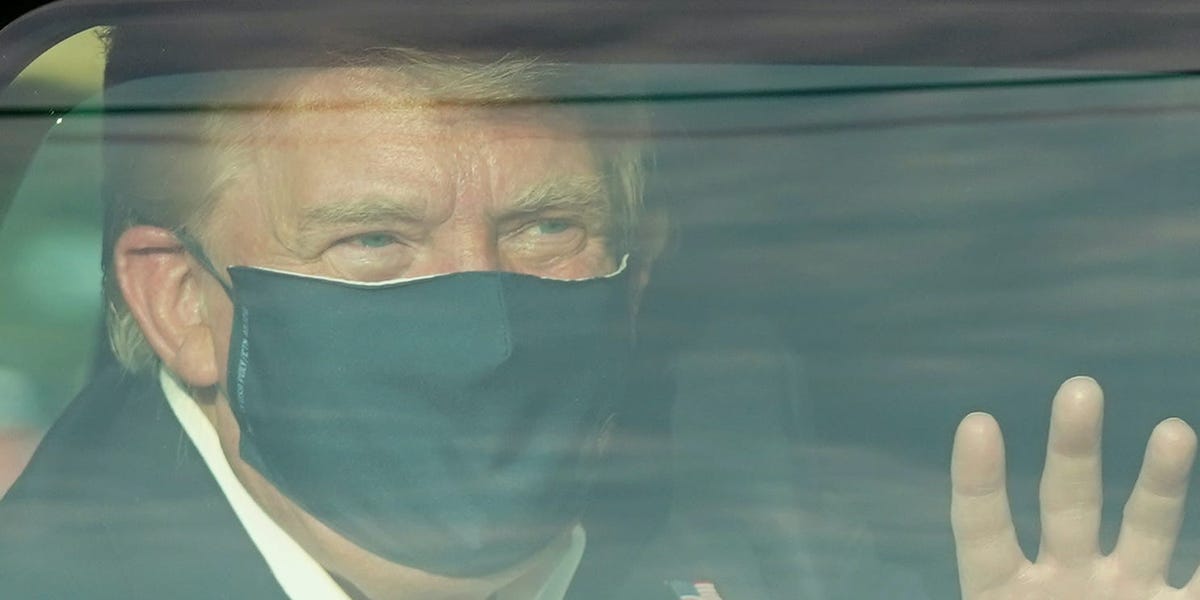 There has been an extreme lack of transparency from the White House when it comes to President Donald Trump’s health, even after he contracted COVID-19.

The Trump administration has consistently dodged questions on when Trump’s last negative COVID-19 test was, which is vital information in terms of who the president may have exposed and precisely when he was infected. The White House has said Trump was diagnosed on October 1, but the administration’s refusal to say when the president’s last test was has raised suspicions about what they could be hiding.

“I don’t want to go backwards,” White House physician Sean Conley said on Monday when asked about Trump’s last negative test. Conley was the target of media criticism last weekend after he initially avoided other questions on Trump’s health, including whether the president had received supplemental oxygen.

Prior to Trump’s diagnosis, the White House routinely announced when the president tested negative for the virus, but now it’s treating the matter as if it’s top secret. White House strategic communications director Alyssa Farah on Thursday said the information was Trump’s “private medical history.”

“The doctors would like to keep it private since it’s his private medical history,” Farah said.

On Thursday night, Trump was asked by Fox News’ Sean Hannity if he’s tested negative for COVID-19 in the time since he was diagnosed. The president did not answer the question, making it unclear whether he’s still COVID-19 positive as he pushes to get back on the campaign trail and hold rallies.

In an MSNBC interview on Friday, White House deputy press secretary Brian Morgenstern would not answer when pressed on when Trump’s last negative test was and contended the information is not valuable to the public.

“There is a reason to share certain information. It is to prevent further transmission of the virus, it’s public health purposes, and that’s what we’re doing,” Morgenstern added.

As Insider previously reported, the last time Trump said he tested negative for COVID-19 was in May.

Insider’s Jake Lahut and Oma Seddiq asked the White House repeatedly on Thursday how often the president is tested, when his last test was, and if it had disclosed any tests taken since May 21.

“The president is tested regularly,” a White House spokesman said in an email.

The Trump administration’s lack of transparency on the health of the 74-year-old president extends beyond COVID-19 as well.

Trump mysteriously visited Walter Reed Medical Center on November 16, 2019. The precise reason for this unscheduled visit remains unclear. The White House downplayed the trip as “routine,” though it was not on his daily public schedule. Then-White House press secretary Stephanie Grisham in a statement at the time said that the visit was Trump using a “free weekend” to “begin portions of his routine annual physical exam.”

Generally, a president’s annual physical occurs in one visit. The results of Trump’s 2020 physical were not released until June, more than six months after the unplanned visit to Walter Reed. In years past, Trump’s physical occurred much earlier — his 2019 exam was conducted in February, and Trump 2018 physical was conducted in January of that year.

What’s more, the president in November 2019 required personnel at Walter Reed to sign nondisclosure agreements before permitting them to treat him, according to a report from NBC News published Thursday, which was based off information from four people familiar with the process. It’s not clear whether Trump had a similar requirement for those treating him at Walter Reed over the weekend, where he was transferred last Friday as his condition worsened post-coronavirus diagnosis.

Under the Health Insurance Portability and Accountability Act, or HIPAA, it’s illegal for health care providers to reveal medical information about patients (including the president) without their consent. Some members of the medical team at Walter Reed were offended that they were asked to sign non-disclosure agreements given the law and the seriousness with which they treated patient confidentiality, the Washington Post reported.

“Any physician caring for the President is bound by patient physician confidentiality guaranteed under HIPAA, and I’m not going to comment on internal procedures beyond that,” White House Deputy Press Secretary Judd Deere said in a statement, per NBC News.

Beyond not being legally obligated to disclose information on his health, Trump is hardly the first commander-in-chief to not be forthcoming about his medical status. Multiple past presidents were dishonest with the public about their health.

But the law and presidential history have not slowed calls for Trump to reveal more about his medical status. The health of any president has major national security implications, which is why the White House has repeatedly been peppered with questions on Trump’s status since his diagnosis.

The president was diagnosed with COVID-19 with roughly a month until Election Day. Polling has shown that a majority of Americans believe presidential candidates should make medical records public.

Both Trump and former Vice President Joe Biden are in their 70s, and the health of presidential candidates has been a top issue throughout this election cycle — particularly after Sen. Bernie Sanders had a heart attack last Octoberbut especially amid the COVID-19 pandemic.

Biden in late 2019 released a three-page medical assessment from Dr. Kevin O’Connor of The George Washington University that described the former vice president as “healthy, vigorous, 77-year-old male, who is fit to successfully execute the duties of the Presidency to include those as Chief Executive, Head of State and Commander in Chief.”

Meanwhile, after months of Trump and his allies baselessly characterizing Biden as senile, the White House continues to refuse to answer basic questions on the president’s health.