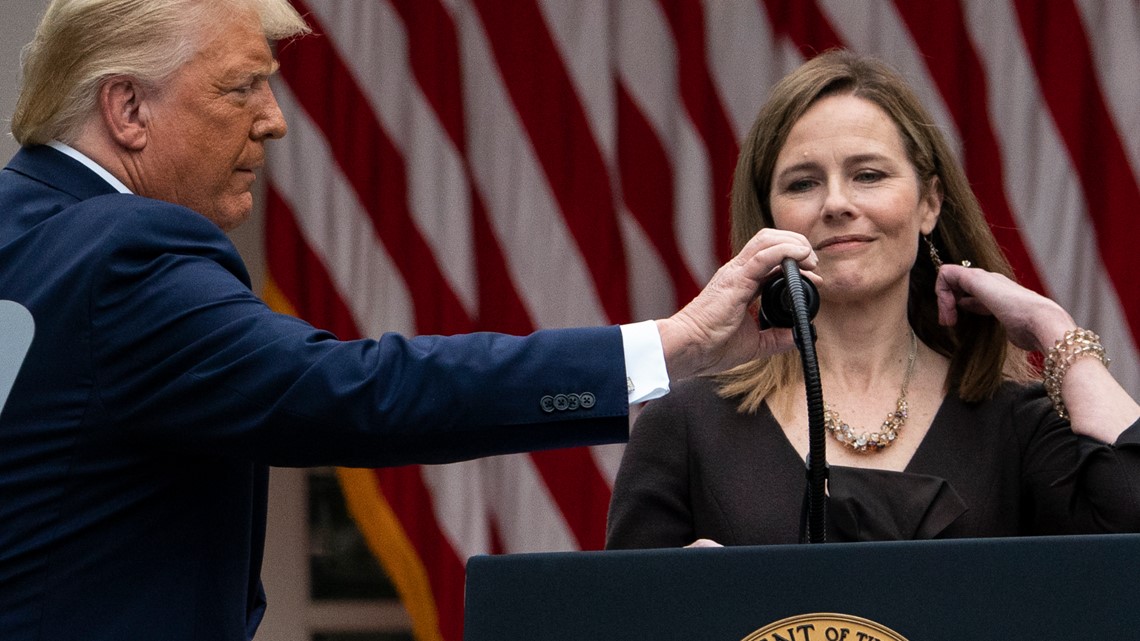 A week after the presidential election, the court will hear arguments to overturn the Obama-era health care law.

WASHINGTON D.C., DC — The Supreme Court will begin hearing arguments Monday after a summer break. Here are some of the issues either already on the court’s docket or likely to be before the justices soon:

RELATED: Faith group deletes mentions of Barrett from its website

A week after the presidential election, the court will hear arguments in a bid by the Trump administration and Republican-led states to overturn the Obama-era health care law. Coverage for more than 20 million people is at stake, along with the law’s ban on insurance discrimination against Americans with pre-existing medical conditions.

President Donald Trump, who has promised but never delivered a replacement for the Affordable Care Act, and Democratic rival Joe Biden sparred over the case in the first presidential debate.

“Obamacare is no good. We made it better,” Trump said at one point. “He has no plan for health care,” Biden said of the president.

The high court has options that are less drastic than striking down the entire Affordable Care Act. It could invalidate the law’s now toothless requirement that most Americans carry health insurance but leave in place core provisions such as subsidized health insurance, Medicaid expansion and protection for people with medical problems.

Trump has already predicted that the 2020 election will end up at the Supreme Court. That’s part of why he says Amy Coney Barrett should be confirmed before Election Day to the seat left open by the death of Justice Ruth Bader Ginsburg. Trump says he wants a full court to be available to weigh in on any campaign-related litigation.

Already, however, the court has confronted election-related cases from Wisconsin, Alabama, Rhode Island, Florida and Texas. Among the issues: ballot witness requirements and allowing all voters to vote by mail. Soon the court will have to decide whether to keep in place a Pennsylvania Supreme Court decision extending the deadline for receiving and counting mail-in ballots in the battleground state and another court decision suspending the ballot witness requirement in South Carolina, where polls find a competitive Senate race.

The day after the election in November, the high court will hear a dispute involving a Philadelphia Catholic agency that won’t place foster children with same-sex couples. It’s a big test of religious rights and could be one of the first cases the court hears with Barrett on board, if Republicans succeed in confirming her before the election.

The justices will review an appeals court ruling that upheld the city’s decision to stop placing children with the Archdiocese of Philadelphia’s agency because it would not permit same-sex couples to serve as foster parents.

The appeals court ruled that the city did not target the agency, Catholic Social Services, because of its religious beliefs, but acted only to enforce its own nondiscrimination policy in the face of what seemed to be a clear violation.

The most high-profile, big-dollar case the justices will hear arguments in this month is a copyright dispute between technology giants Oracle and Google.

The dispute has to do with Google’s development of its Android operating system for smartphones. Oracle says that in developing the popular Android, Google copied approximately 11,500 lines of its copyrighted code. Google says it didn’t do anything improper. Oracle disagrees and sued Google in 2010. It has said it’s owed nearly $9 billion.

Lower courts have grappled with the case for a decade. Most recently, after a jury sided with Google, an appeals court overturned that ruling.

In December, the justices will hear arguments over whether Congress can have access to secret grand jury testimony from special counsel Robert Mueller’s Russia investigation — a legal process that began in summer 2019, before Trump was impeached by the House.

The court already handed Trump a victory when it agreed in July to deny the Democrats who control the House access to the material before the election.

It’s possible the justices never have to reach a definitive ruling in a sensitive dispute between the executive and legislative branches of government, if either Trump loses reelection or Republicans regain control of the House next year. It’s hard to imagine that a Biden administration would object to turning over the Mueller documents or that House Republicans would continue to press for them. Also unclear is how many new, or incendiary, revelations might be contained in the grand jury transcripts.