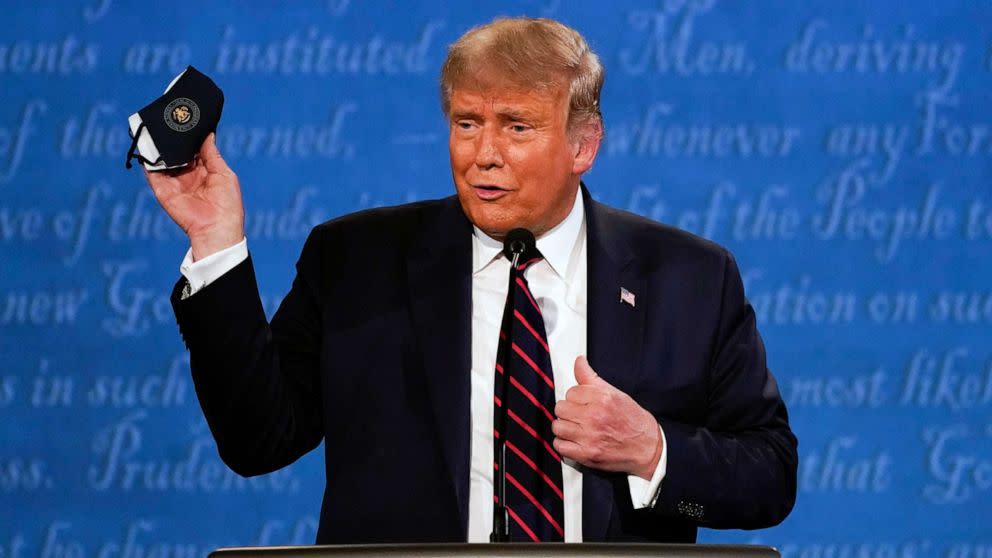 President Donald Trump is in isolation after announcing early Friday that he and First Lady Melania Trump were diagnosed with the coronavirus.

As a 74-year-old male, Trump faces several risk factors that could increase the likelihood of serious complications from COVID-19, including a body mass index (BMI) in the obese range and elevated cholesterol.

“The virus has shown us from the beginning it is mysterious and insidious and it can come in waves,” said Dr. Jennifer Ashton, ABC News’ chief medical correspondent. “We do have to remember some positive, encouraging statistics: 80% of patients with COVID-19 do not require hospitalization. That does not mean, though, that their disease course will be mild. It just means that they can be managed in a home environment.”

White House Chief of Staff Mark Meadows said Friday morning that Trump’s symptoms were mild and that he was “in good spirits” and “very energetic.”

“We’ve talked a number of times this morning, I got the five or six things that he had tasked me to do like I do every single morning, and he is certainly wanting to make sure that we stay engaged,” Meadows said.

Dr. Sean Conley, the White House physician, said in a memo overnight that Trump remained “well” and that he’d “continue carrying out his duties without disruption.”

Mild symptoms of the infection include cough, fever or chills, headache, fatigue, loss of smell or taste, runny nose or congestion and shortness of breath, according to the Centers for Disease Control and Prevention.

The White House has not been forthcoming about Trump’s health in the past. In November 2019, he made an unannounced visit to Walter Reed Medical Center for what the White House called a “quick exam and labs,” which brought speculation about his health. However, earlier in 2019, Conley released a memo saying the president was “in very good health overall.”

At 6 feet, 3 inches tall, and weighing 243 pounds, Trump had a BMI of 30.4, according to Conley’s 2019 memo. A normal weight range is 18.5 to 24.9 and overweight is considered 25 to 29.9. At the time of the exam, his physician noted he’d gained seven pounds since September 2016 and he was also taking an increased daily dose of rosuvastatin, a drug used to treat high cholesterol.

“In medicine, we use these statistics to help frame our risk assessment,” Ashton said. “Every patient, every individual is different, and we treat every patient as such.”

That said, it’s still early in the president’s illness. Since early in the pandemic, doctors have documented pivotal moments in patients around the eighth day of the infection where their conditions either take a turn for the better or seriously worsen. On March 27, U.K. Prime Minister Boris Johnson tested positive for COVID-19 and on April 5, he was admitted to a hospital, where he spent three nights in an intensive care unit.

Dr. Simone Wildes, an infectious disease physician at South Shore Health in Massachusetts, says “the question would be, what is Trump’s respiratory status now?”

“[On] about day eight, we get into the respiratory phase where people … we say they ‘drop off a cliff,’ kind of, because their respiratory status worsens so quickly,” she said, referring to her experiences with treating COVID-19 patients. “At that point, this is when, for some patients, they get into trouble where they have to be intubated.”

She said that even before COVID-19 patients begin experiencing respiratory distress, doctors are now trying “more than ever” to start COVID-19 patients on medications like remdesivir, which has shown some effectiveness in improving recovery from the disease.

“The earlier you start medication, the better [the prognosis] is,” she said, adding that she wouldn’t be surprised if Trump is already receiving these drugs. “If his inflammatory markers are high, then I think people are gonna say, ‘Let’s just go ahead and start those right now.”

Trump’s health: What we know about it and how it could impact his COVID-19 prognosis originally appeared on abcnews.go.com