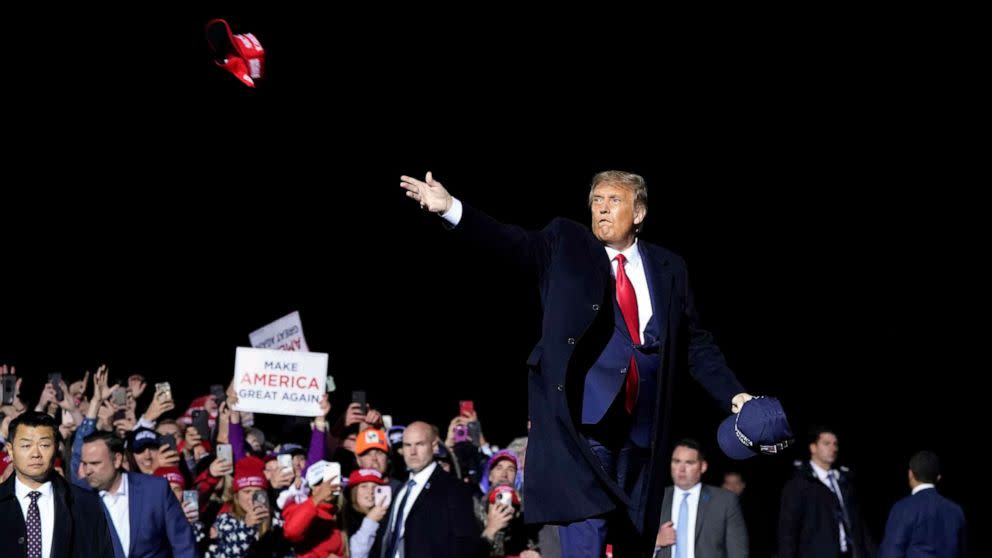 The news of President Donald Trump and first lady Melania Trump contracting COVID-19 comes as the president was significantly ramping up his campaign rally schedule heading into the final stretch of the election season.

Trump 2020 Campaign Manager Bill Stepien said in a statement that “all previously announced campaign events involving the President’s participation are in the process of being moved to virtual events or are being temporarily postponed.”

“In addition, previously announced events involving members of the First Family are also being temporarily postponed. All other campaign events will be considered on a case-by-case basis and we will make any relevant announcements in the days ahead,” said Stepien.

He also said that Vice President Mike Pence, who has tested negative for COVID-19, plans on resuming his scheduled campaign events. None were scheduled for Friday.

While the majority of these rallies have been outdoors at airport hangars, some have been scheduled indoors, despite pleas from local and state officials. Also in attendance at these events are a large number of mostly mask-less supporters who are not social distancing.

Trump had been operating his campaign under the assumption that he believes that the United States is “rounding the turn” on the coronavirus pandemic, even despite public health experts contradicting him, like Dr. Anthony Fauci, the top infectious disease expert and director of the National Institute of Allergy and Infectious Diseases, who said, “I have to disagree with that.”

The president is attempting to save his re-election chances as he is down in the polls to former Vice President Joe Biden, facing a cash crunch and had a debate performance where former New Jersey Governor and ABC News contributor Chris Christie, who helped prep the president for the debate, said he was “too hot” on the stage.

With his recent diagnosis, this puts the current status of the president’s re-election campaign in disarray.

Trump has held 20 rallies since restarting them on Aug. 17 and in the month of September, there were 15 rallies alone. The president also had five scheduled rallies in Florida, Wisconsin and Arizona over the next few days. A rally scheduled in central Florida for Friday was canceled shortly after he announced he had contracted the coronavirus.

In an earlier email to campaign staff on Friday, Stepien said, “While some public events will be taken down, the Campaign office remains open and our nationwide team will continue with our efforts to re-elect President Trump,” sources told ABC News.

Stepien also said that anyone who had exposure to someone who tested positive should immediately self quarantine.

“While we do not believe anyone else without symptoms needs to self-quarantine at this time, it is on all of us to continue to exercise the smart judgment and practices the campaign has long encouraged: wear a mask, wash your hands, socially distance, check in via the live safe app on a daily basis and work from home if you’re not feeling well,” Stepien said.

MORE: Trump contracts coronavirus after downplaying risk for months. What next?

Last month Trump told a reporter with the The Las Vegas Review-Journal that he wasn’t worried about contracting the coronavirus because at his campaign events, “I’m on a stage and it’s very far away.”

Notably, supporters behind the president at these campaign events are told they have to wear masks but throughout the rest of the venue, while masks are given away and people are encouraged to wear them, few are seen wearing them.

The president suspended his large campaign rallies earlier this summer after an increase in coronavirus cases at a Tulsa, Oklahoma, rally that likely contributed to a surge in COVID-19 cases, according to a Tulsa health official. He switched to what the campaign describes as “tele-rallies.”

They are sporadic and held without any guidance — one as recently as Thursday evening, before the announcement of his positive diagnosis. The “tele-rallies” are when the president calls supporters from a select state and those chats are simultaneously streamed on Facebook to his 29 million followers.

There is no inclination of how many supporters are on the calls, only the president can be heard speaking, but Trump has done 16 of those events in several key battleground states. It could be a way for the president to continue to engage with supporters while he is in isolation.

Ivanka Trump, Donald Trump Jr. and Eric Trump have also been out on the campaign trail recently and were scheduled to participate in future campaign events.

The status of those events also remains uncertain because anyone who has been in close contact with someone who has COVID-19 — as they were with the president at the first presidential debate on Tuesday night — should quarantine for 14 days according to the Center for Disease Control recommendations.

In his statement Friday, Stepien said that campaign events with the three will operate on a case-by-case basis and that the campaign will make any upcoming announcements in the days ahead.

They were all on the trail Wednesday and Carolina Hurley, special assistant to the president, said Ivanka and Jared Kushner tested negative for COVID-19 Friday.

GOP Chairwoman Ronna McDaniel, amid her own recent COVID-19 diagnosis, tweeted that she is “Wishing @realDonaldTrump and @FLOTUS Melania Trump a speedy recovery. We are praying for you!”

Senate Majority Leader Mitch McConnell also tweeted that he was “Happy to hear the White House physician’s report that @POTUS and @FLOTUS are feeling well following their positive tests for COVID-19. Let’s continue to pray today and every day for our President and our First Lady and for all those impacted by COVID-19.”

What Trump’s COVID-19 diagnosis could mean for his campaign originally appeared on abcnews.go.com