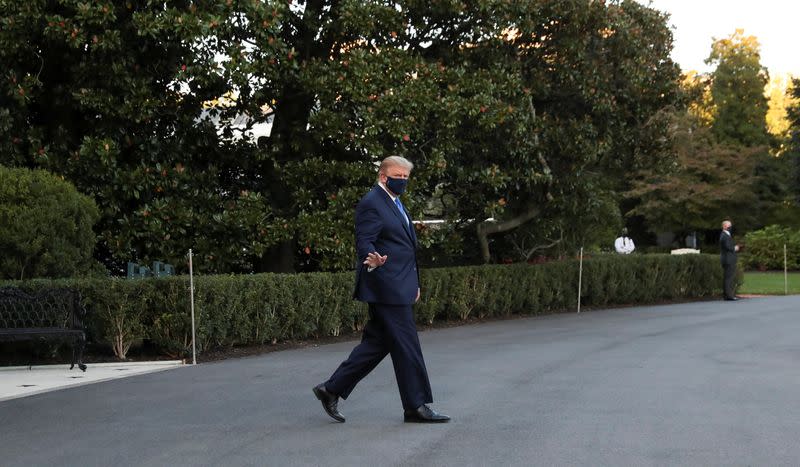 (Reuters) – U.S. President Donald Trump on Friday said he and his wife Melania had tested positive for COVID-19, and the White House said he was given an experimental treatment designed to combat the virus as well as a small array of treatments including aspirin and Vitamin D.

Trump, 74, has a slight fever, a source said, and is being taken to Walter Reed military hospital for several days as a precaution. Trump’s gender, age and weight make him more vulnerable to developing severe COVID-19, and give him a notional risk of around 4% of dying from it, health experts said. [nL8N2GT3UD]

WHAT IS THE EXPERIMENTAL TREATMENT TRUMP IS TAKING?

One of the most anticipated classes of experimental COVID-19 drugs is monoclonal antibodies: manufactured copies of human antibodies to the virus. The injected antibodies are designed to begin fighting the virus immediately and are being developed to prevent and treat COVID-19.

The technique is already in wide use for treating a range of illnesses. Data so far is limited for COVID-19 antibodies, but U.S. infectious disease chief Dr. Anthony Fauci is among those saying it has promise.

Trump is taking an antibody cocktail being tested by Regeneron Pharmaceuticals Inc <REGN.O>, which has reported improved symptoms in non-hospitalized COVID-19 patients, with no serious side effects in trials.

WHAT ARE THE APPROVED TREATMENTS FOR ‘MILD’ COVID-19?

“There are no treatments to date that have been really established to be effective in this phase of illness. At this point, it is really symptomatic and supportive care,” Dr. Jonathan Grein, director of hospital epidemiology at Cedars-Sinai Medical Center in Los Angeles, who is not involved in treating Trump, said in a telephone interview.

Trump’s doctor said the president is taking several medicines, including:

* heartburn drug famotidine, often sold under the brand name Pepcid. The drug has not been proven to work against COVID-19, but researchers are studying it as a potential treatment.

* aspirin, which Trump previously has said he takes daily. Aspirin can help avoid heart attacks and is a fever reducer.

Grein said the president is likely being closely monitored, and would be given extra oxygen or fluids if needed. Supportive care would depend on symptoms: things such as cough syrup or fever-reducing drugs.

Trump early in the pandemic backed the idea of using anti-malaria drug hydroxychloroquine to treat COVID-19. In May, the president said he was taking the drug to prevent an infection. The FDA briefly allowed use before in June withdrawing an emergency use authorization, saying it had determined hydroxychloroquine was not effective.

WHAT HAPPENS IF TRUMP’S CONDITION WORSENS?

Trump was moved to hospital in case his condition deteriorates – if, for instance, he developed breathing problems. “It is not uncommon for patients to have symptoms for several weeks. Some can get worse well into the second week of illness,” Dr. Grein said.

For patients hospitalized with COVID-19, the FDA has given emergency-use authorization for two treatments: Veklury, also known as remdesivir, an intravenous antiviral drug sold by Gilead Sciences Inc <GILD.O>, which has been shown to shorten hospital stays, and convalescent plasma, which is derived from the blood of people who have survived the disease and carries antibodies that can help a patient fight COVID-19.

Hospitals also commonly use the generic steroid dexamethasone, which was shown in studies to improve survival for patients hospitalized with critical COVID-19 who need extra oxygen. But the steroid should not used in people with mild illness since it can limit the body’s own ability to combat the virus, according to guidelines from the Infectious Disease Society of America.