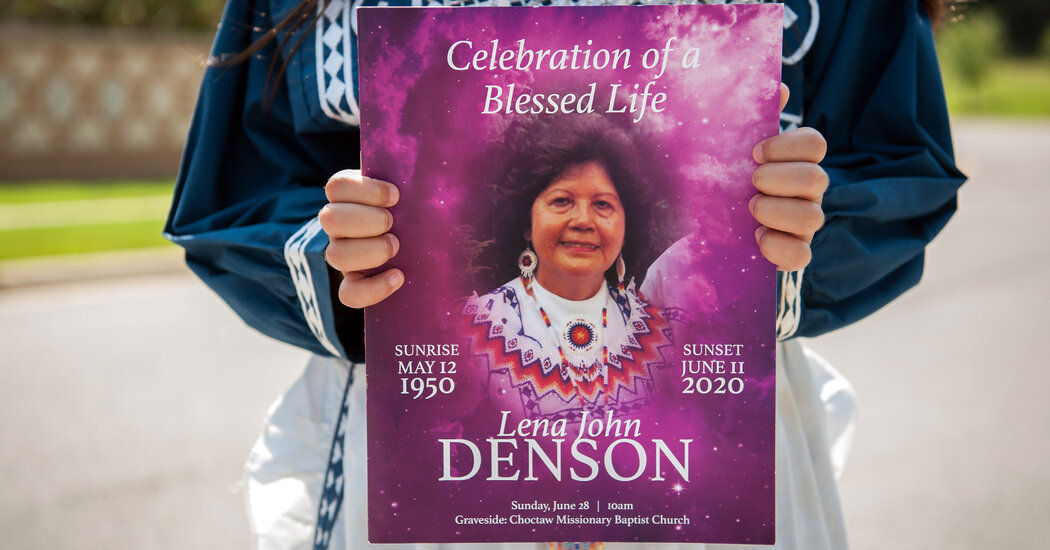 CHOCTAW, Miss. — For Jason Grisham, it began with a fever. Then came the chills, lingering headaches and a terrifying realization about what the symptoms might mean.

At the time, in early April, only a handful of residents in his Native American tribe in central Mississippi had tested positive for the coronavirus. But within days, Mr. Grisham, 40, would join a list that has only grown staggeringly longer.

Soon, his wife and oldest daughter would also be sick. All three would survive, but the cases would continue to tear through the Mississippi Band of Choctaw Indians unabated, eventually sickening more than 10 percent of the tribe’s 10,000 residents and killing at least 81 people.

“We were prepared, we always wore our masks out and we always used hand sanitizer because the last thing we wanted was for the virus to be in our home,” said Mr. Grisham’s wife, Kendall Grisham, 39.

That month, several residents died. In May, 30 were killed. In June, another 33. The toll climbed all summer.

“It was a devastating blow to our people,” said Cyrus Ben, the tribal chief, who also had the virus.

Through last month, Neshoba County, where most of the tribe’s residents live, had the highest death rate per capita in Mississippi from the coronavirus, according to data tracked by The New York Times. And despite making up 18 percent of the county’s residents, tribal members have accounted for more than half of the county’s virus cases and about 64 percent of the deaths.

“We aren’t just losing family members or an aunt or uncle, we are losing parts of our culture,” said Mary Harrison, interim health director for the Choctaw Health Center. “We’ve lost dressmakers, we’ve lost artists, elders who are very fluid in our language — so when you think about an individual we’ve lost, these are important people in our community.”

The Choctaw are the state’s only federally recognized tribe. Members are scattered across 35,000 rural acres in eight communities and have been among the hardest hit in the state — like many other tribal nations across the United States.

The Navajo Nation, the country’s largest reservation, has recorded at least 560 deaths — a tally larger than the coronavirus-related deaths in 13 states and a death rate higher than every state.

While communities of color have been disproportionately affected by the virus, it appears to be especially deadly in some tribal nations, where poverty, multigenerational housing and underlying health conditions such as diabetes and heart disease have been contributing factors.

Across tribal nations, the pandemic has forced the closures of casinos, schools and, in some cases, the roads leading to reservations, upending daily lives and bringing economic devastation to many. In eastern Mississippi, the Choctaw tribe is among the largest employers. It owns a popular resort with two casinos that employs about 2,400 people, about half of whom are tribal members.

The casino-resort complex, which was among the first in Indian Country to offer sports betting, closed in March because of the pandemic. It has only now begun to slowly reopen.

Long before the coronavirus, the Indian Health Service, the government program that provides health care to the 2.2 million members of the nation’s tribal communities, was plagued by shortages of funding and supplies, a lack of doctors and nurses, too few hospital beds and aging facilities.

Now the pandemic has exposed those weaknesses as never before, contributing to the disproportionally high infection and death rates among Native Americans and fueling new anger about what critics say have been decades of neglect from Congress and successive administrations in Washington.

Hospitals waited months for protective equipment, some of which ended up being expired, and had far too few beds and ventilators to handle the flood of Covid-19 patients. The agency failed to tailor health guidance to the reality of life on impoverished reservations and did little to collect comprehensive data on hospitalizations, death rates and testing to help tribes spot outbreaks and respond.

In June, as the deaths began piling up across Choctaw communities, the tribal chairman asked the Indian Health Service’s critical response team to assist the Choctaw Health Center.

The critical care response team — composed of one physician, two critical care nurses and a respiratory therapist — arrived at the Choctaw Health Center in mid-June and stayed for more than three weeks.

Since the start of the pandemic, the 20-bed hospital on the reservation has lost at least four staff members to the virus.

Hospital officials said they believed that the first coronavirus case involving a Choctaw member was in mid-March, when a member contracted it while at work away from the reservation.

From there, the cases began to snowball.

Access to testing, ever-evolving guidance from the C.D.C. on dealing with the virus, and shortages of workers and supplies were early obstacles the tribal health care workers had to overcome. At that time, the mortality was high.

“With the initial surge, people were frightened. They didn’t know what to expect,” said Dr. Kerry Scott, interim chief medical officer at the Choctaw Health Center. “There were a high amount of our patients who were presenting with severe symptoms so the mortality rate was a little bit higher than what we were expecting.”

Among those deaths were Nyron and Veronica Thomas. Their son, Bryce Thomas, had to bury his parents a few weeks before graduating from high school.

“Bryce Thomas should be celebrating his recent graduation from Neshoba Central High School with his parents,” a family friend wrote on a GoFundMe page to raise money for the teenager. “Instead he is having to bury both of his parents due to the coronavirus.”

In July, Mr. Ben, the Choctaw tribal chief, issued an executive order mandating that everyone 2 years and older wear a mask. That same month, the Neshoba County Fair and the Choctaw Indian Fair, both of which are big tourist attractions, were canceled.

After more than 60 Choctaw deaths in the early months of the summer, the numbers appeared to stabilize. One tribal member died in August and another in September.

So far this month, though, two members have died after contracting the virus, leaving residents rattled and bracing for a second wave.

Among those is Mitzi Reed, 45, who works as the tribe’s wildlife and parks director and lost her grandmother and uncle to the coronavirus this summer.

“It was not being able to see them that really took its toll,” Ms. Reed said. “Because my mom is up there in age we didn’t attend the funerals.”

In a culture where mourning is communal — with a tradition of wakes that on average last two days — not being able to properly grieve those who have died has deeply affected tribal members, Mr. Ben said.

“You say your goodbyes,” he said, “but it’s a wound that is never truly allowed to heal.”