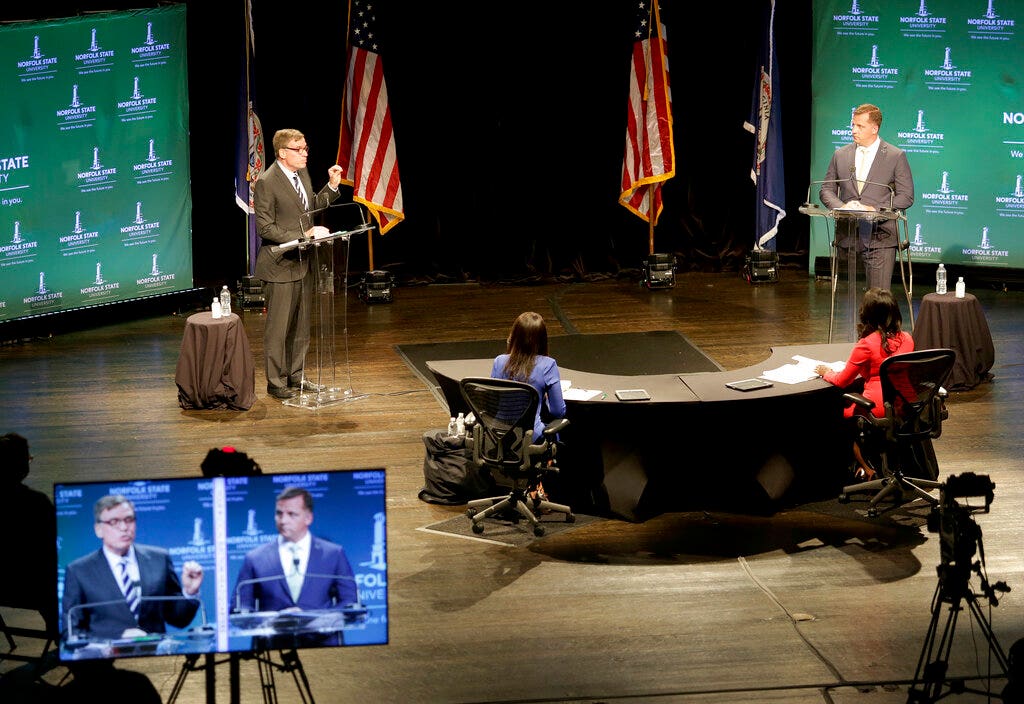 Many of the questions asked of the two White candidates involved racial disparities.

Early on, they were asked about President Trump’s comments on a deadly, racially charged Charlottesville incident in 2017 and his handling of a similar question during Tuesday’s presidential debate in Cleveland.

“The president badly fumbled that question … and he badly fumbled it in the Charlottesville case as well,” Gade said. “I disavow racism, I disavow white supremacy, and it has no place in our society.”

Moments later, Warner said Trump was wrong about both issues and invoked the name of Heather Heyer, who was killed by a White supremacist who drove his car into a crowd in Charlottesville.

“I hope and would ask my distinguished opponent, Mr. Gade, to acknowledge that Mr. Trump was wrong and call him out for that inappropriate conduct,” Warner said.

“I literally just said that, Senator,” Gade shot back.

As in their first debate meeting last week, the candidates both defended the provisions of the Affordable Care Act, also known as ObamaCare, that protect patients with preexisting conditions. They elaborated on their stances Saturday evening by answering what parts of the bill they would change.

In addition to renewing his calls for market-based insurance competition and the expansion of health savings accounts Gade also called for price transparency to “empower consumers” as they choose what plan to buy.

Warner said insurers should be allowed to sell plans across state lines, which would ostensibly increase competition and bring prices down. It’s an idea President Trump voiced support for on the campaign trail in 2016.

Near the end of the debate, the candidates were asked directly about controversial statements they’d made in the past – and they were not allowed to rebut one another.

Gade, a college professor whose parents both worked as teachers when he was growing up, was asked about his 2019 comments on “nasty, failing public schools.”

He said some schools were indeed failing, especially in underprivileged communities, and that the remedy was to make school choice more widely available to students from all backgrounds.

Sen. Warner was confronted over his stance in 2014 on a congressional effort to get Washington’s NFL team to drop its nickname – something that didn’t happen until this year, after the team faced pressure from corporate sponsors. He was one of just five Democrats who did not support the movement six years ago, according to the moderators.

“Looking back, I should have,” he said, before adding he was still proud of his ability to work with lawmakers from the other side of the aisle.

On some issues, the candidates appeared to be in relative agreement.

Both called for police reforms and an end to qualified immunity while resisting calls to defund the police and arguing that police spending should rise. And both candidates argued that students should be able to refinance their student debt.

“If you can go out and get a mortgage right now for under 3 percent we ought to be refinancing all of our student debt down to those record-low interest rates,” Warner said at one point.

The candidates’ third and final debate is scheduled for Tuesday, Oct. 13.