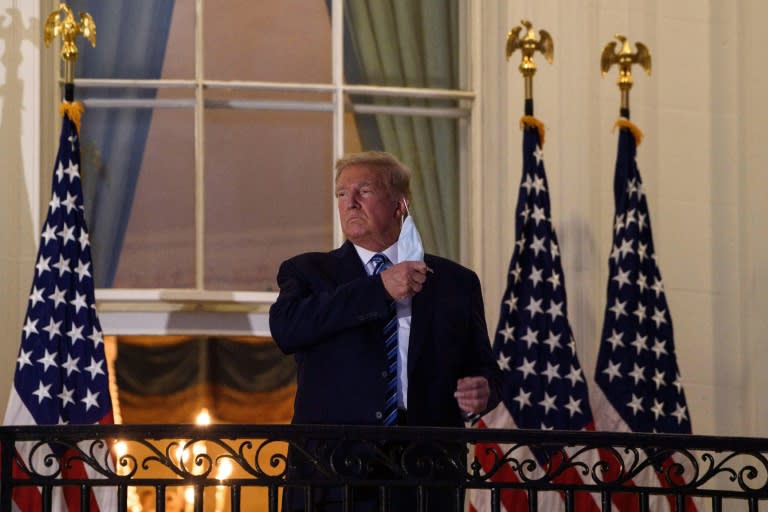 How healthy is Donald Trump, really? Contradictory and incomplete information from officials since the president contracted coronavirus confirms that the health of the White House incumbent is a well-kept secret.

Analysts also say Trump has displayed a savvy use of digital tools to try to steer coverage of the first major presidential health crisis of the social media age.

Since the Friday announcement of Trump’s positive test, his personal doctor Sean Conley has been accused of giving fragmented and confusing information that conflicted with what Chief of Staff Mark Meadows was saying.

According to Matthew Algeo, the author of several books about the recurring lies of US leaders, presidents are not compelled to be forthcoming about their health, so it’s no surprise if they are not.

“We just basically are operating on the honor system when it comes to our president’s health,” he said.

With Trump’s reelection bid less than a month away, now is not the time to look less than fully fit, analysts say.

Rose McDermott, a specialist in the health of American presidents at Brown University, says the fact that a president’s doctor is generally also a serviceman — in Conley’s case, a Navy officer — is “structurally” a conflict of interest.

“Which means that if the president doesn’t like what he says about him, he can fire him… and he can do things like take away his pension.”

The history of US presidents is littered with lies about their health.

Woodrow Wilson suffered a severe stroke during his presidency in the fall of 1919 that partially paralysed him, but no one spoke of it until February 1920.

Dwight Eisenhower downplayed the severity of a heart attack he suffered in 1955, while John F. Kennedy never spoke of his life-threatening Addison’s disease.

Kennedy’s assassination in 1963 led to the adoption four years later of the 25th Amendment to the US Constitution, which clarified that the vice president takes over if the president dies or is incapacitated.

However, apart from a clear and serious injury — such as when Ronald Reagan was shot and wounded in 1981 and his powers temporarily transferred to then-vice president George Bush — the circumstances in which Congress can declare a president incapable of performing his duties are not clearly defined, Algeo says.

The increased media glare and widespread use of social media has not fostered transparency, analysts argue, even if presidents can no longer hide from the public for four months like Wilson did.

Especially since the current incumbent is a reality TV star turned frantic tweeter who knows how to be the center of attention, according to Emerson Brooking of the Atlantic Council think-tank.

Trump has kept the media on their toes since Friday, drip-feeding carefully conceived impactful videos of himself that allude to him beating the virus and driving by supporters outside the hospital on Sunday. The culmination was his return to the White House on Monday, which Brooking describes as like “a movie trailer.”

“If the press are discussing or criticizing Trump’s latest piece of content, they are not asking other questions about Covid-19 policy or invoking the 25th Amendment,” he added.

Amidst the lack of transparency, some experts are calling for the creation of a commission of independent doctors to check on the president’s health.

The calls have been given impetus by the advanced years of Trump, who at 74 is America’s oldest-ever president, and his Democratic rival Joe Biden, who is 77.

“Maybe you don’t have every detail given to the public, but you have an independent board saying, ‘Yes, this person is physically fit, or as fit as can be expected,'” said McDermott.

The calls have so far been unsuccessful in the US, as they have been in other western countries.

It’s not only in America where the health of the country’s leader is taboo, McDermott notes.

Authoritarian regimes are obvious examples, but citizens are often reduced to speculation in democratic countries as well.

German Chancellor Angela Merkel, who has been praised for her handling of the pandemic, was coy about trembling hands she suffered in public in 2019.

“I don’t see anyone who’s done an exemplary job of like, once a year, coming out and releasing medical information in the way that many leaders in the US disclose their taxes,” said McDermott.