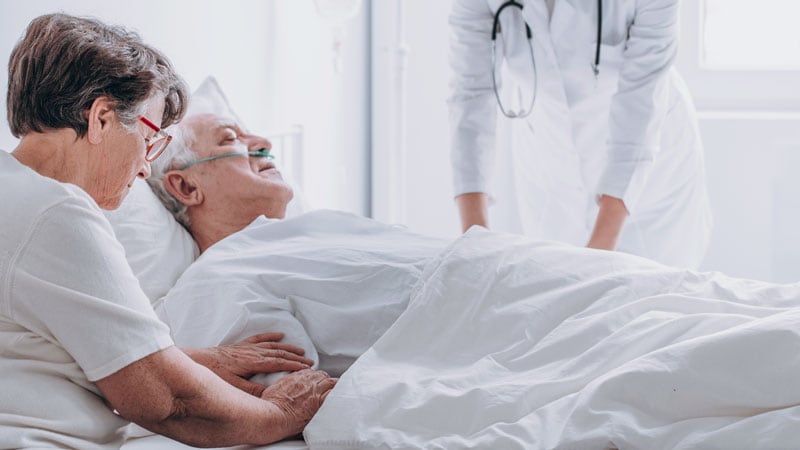 Medically assisted dying is illegal in the United Kingdom, but it continues to be debated. Now three physicians argue that it’s time for a fresh look at the issue.

Having previously not supported a change in the law, an eminent public health physician is questioning his previous stance, now that death is knocking on the door.

“I am convinced that it is time to look at this again,” he writes in a personal essay in The BMJ, one of three on the same topic published together.

“A review that takes account of changing views across wider society seems timely,” he writes. “We need to set aside entrenched positions on each side of the debate and look openly at the problems faced by people at the end of their lives.

Surely this tells us that our current arrangements are inhumane.
Dr Paul Cosford

Also encouraging another look at the issue is Lucy Thomas, a consultant in public health in Hertfordshire, England, who works closely with patients with life-limiting illnesses. In another essay published in The BMJ, she argues that the issue should be “radically reframed” and “demedicalized.”

Currently, medically assisted dying frames the process “as a straightforward medical solution to a medical problem,” she writes.

In its present framework, “with medical criteria for what constitutes an acceptable reason for ending life, and with doctors as the arbiters and administrators…it extends medical authority rather than enhancing patient autonomy, with deeply damaging unintended consequences.”

If patients do not have eligible medical conditions, physicians are expected to address interventions and support them by assisting them in “their struggle to rediscover meaning, value, and purpose; and to do everything possible to prevent suicide,” she writes.

Conversely, for those who are eligible for assisted dying, physicians are expected to help them end their lives. This formally validates the patient’s own assessment that their life is no longer worth living, she argues.

Moving this debate outside the medical frame “brings the fundamental ethical and practical dilemmas into focus, facilitating serious discussion about how society should respond to those with mental capacity and a consistent desire to end life prematurely,” she writes.

Thomas concludes that there are no easy answers or simple solutions, but that “acknowledging this profound complexity may be the first step towards a more constructive debate.”

Already Legal in Some Places

Medically assisted dying has been legalized in five countries, nine states in the United States, and one state in Australia.

The eligibility criteria vary significantly among jurisdictions. The criteria range from having a terminal illness with 6 months or less to live (in the American states; in Colombia; and in Victoria, Australia), to having a serious and incurable illness, disease, or disability that is not necessarily terminal (Belgium, the Netherlands, and Canada), to having unbearable physical or mental suffering (the Netherlands, Belgium, Luxembourg, Colombia, and Canada).

In the United Kingdom, attempts to legalize the practice have been rejected by Parliament, and the British Medical Association (BMA) has long been opposed to assisted dying. Its view has held weight, and it has often been quoted in parliamentary debate as representing the views of physicians.

However, an opinion poll of physicians, conducted in October 2017 by doctors.net, found that 55% agreed or strongly agreed that assisted dying should be made legal in defined circumstances; 43% disagreed, and 2% had no opinion.

The BMA conducted its own survey earlier this year, the results of which have not been released. The results were to have been debated during the annual representative meeting (ARM) that was scheduled for June 2020. However, owing to the ongoing COVID-19 outbreak, this year’s ARM was a 1-day virtual event held on 15 September. At that event, the issue of medically assisted dying was not debated. The BMA plans to publish the survey results within the next few weeks. It also plans to hold a debate on the results at the next full ARM, which is expected to be held in June 2021.

The BMJ has come out as being pro on the issue. “The BMJ supports the legalization of assisted dying,” said the journal’s editor-in chief, Fiona Godlee, MD, in a statement. “The great majority of the British public are in favor and there is now good evidence that it works well in other parts of the world, as a continuation of care for patients who request it and are in sound mind.”

The Royal College of Physicians adopted a neutral stance on the issue last year, after a survey of its members revealed that the opinions were far more divided than had been assumed. The ability to speak on behalf of physicians who oppose and those who support assisted dying, as well as those who have not formed an opinion, has empowered the College, comments Zoe Norris, BMedSci, BMBS, a general practitioner at the National Health Service. Norris, a member of Healthcare Professionals for Assisted Dying, is the author of the third essay published in The BMJ.

Norris highlights a recently published book, Last Rights: The Case for Assisted Dying, written by Sarah Wootton and Lloyd Riley of Dignity in Dying, and says that it should be required reading for every patient and physician.

“I want this new book ― and its powerful stories of how our current laws fail people ― to prompt more open-minded and constructive conversations about end-of-life choice in this country,” she writes.

Norris also notes that the change in law in Victoria, Australia (made in November 2017), was made after an inquiry into end-of-life choices found that the status quo was “untenable and did not reflect Victoria’s values and social needs.

“Previously the assisted dying debate [in Australia] had played out in much the same way as it has here [in the United Kingdom], with attempts to change the law being blocked by those who held what were ultimately unjustified fears about the negative impact of law change,” Norris says.

The book Last Rights “reminds us of the cruelty that our own dying citizens endure,” she writes.

The Australian state of Victoria took a thorough and impartial look at the functioning of their ban on assisted dying, and Norris believes that the United Kingdom needs to do this as well. She supports a call for a “Parliamentary Inquiry into the impact our current law is having on dying people, their families and the people who care for them.”

Norris says she understands that there is a broad range of views on this topic among many of her colleagues but that people on both sides of the issue “should welcome the opportunity to have their conflicting claims scrutinized.” But, she adds, “to do this we all need to learn how to contribute our expertise in a constructive way.

“Regardless of our own personal views, we cannot ignore the voices of those who have witnessed first-hand the horrific things that can happen when we deny people choice and control over their death,” she concludes. “Last Rights amplifies these voices, and I believe as doctors it is our duty to listen to them.”

Norris is a member of Healthcare Professionals for Assisted Dying. Cosford and Thomas have no competing interests.