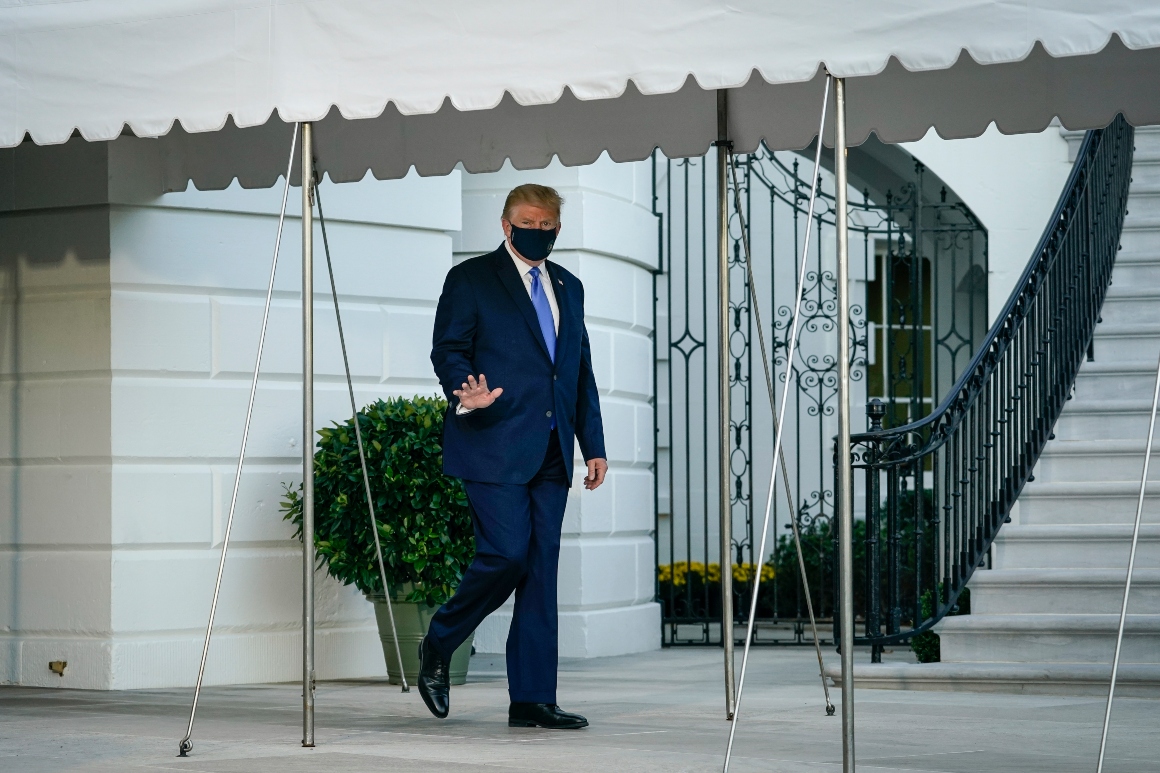 A Kaiser Family Foundation poll released last month found that just 40 percent of Americans trust Trump to provide “reliable information on coronavirus,” and only 36 percent of respondents this summer deemed the president “honest and trustworthy” — which was actually an improvement from last year’s mark of 34 percent, according to Gallup’s long-running poll.

“My initial instinct was he’s lying about this diagnosis,” said Rebekah Nagler, a University of Minnesota professor who has a forthcoming paper that addresses Trump’s conflicting claims on coronavirus. “And I don’t think I’m the only person who felt that way,” Nagler said, hastening to add she no longer doubted he had actually come down with the disease.

Since revealing his diagnosis early on Friday, Trump has tweeted just twice — first, a short video to indicate he’s healthy, and then an upbeat “Going well, I think!” late Friday night. The information flow around his actual symptoms and condition has been patchy at best, and possibly misleading: After officials like economic adviser Larry Kudlow and chief of staff Mark Meadows had assured reporters that his symptoms were “mild” or “very moderate” earlier in the day, the White House announced in a press release that the president had received an experimental antibody injection. Then came the news that the president was being admitted for what a spokesperson billed as a “several day” stay at Walter Reed Medical Center, and a late-night memo that doctors were beginning to treat Trump with Remdesivir, a drug that can improve recovery time from Covid-19.

In his short political career, many of Trump’s most notable obfuscations have centered around his own health, including varying claims about his height, an unusual trip to Walter Reed last year and a glowing 2015 letter by his personal physician, claiming Trump would be the “healthiest individual ever elected to the presidency.” That physician, Harold Bornstein, in 2018 told NBC that Trump had dictated the letter and later sent his personal bodyguard to remove his medical records from Bornstein’s office.

Now Trump must convince Americans that he’s healthy enough to lead the nation from a hospital ward. And he faces a severe test that can’t be papered over by false claims—and can’t necessarily be anticipated by experts.

Doctors warn that Covid-19’s effects are unpredictable and patients can suddenly worsen. U.K. Prime Minister Boris Johnson went from reporting “mild” coronavirus symptoms in late March to needing oxygen in the hospital within two weeks, telling reporters later that his survival had been essentially a 50-50 proposition. Trump’s own age and weight — 74 years old, with a body-mass index that’s technically obese — also elevate his personal risks for coronavirus complications.

“The president’s a public citizen — he can decide how much or how little he wants to reveal as he wants,” said Jeremy Faust, an emergency medicine physician at Brigham and Women’s hospital and Harvard Medical School instructor who writes about health communication.

“But Americans do have some right to know,” Faust added. “The very best way to address that is to be extremely transparent, especially given some of the gaps that have been there in the past.”

Medical experts said they’re still trying to fill in the current gaps, with the doctor for former Vice President Dick Cheney rattling off dozens of questions he would be eager to ask Trump. “Why did your symptoms warrant an admission? Why did you take an experimental drug? Have you spoken to Tony Fauci?,” said Jonathan Reiner, who’s been Cheney’s cardiologist since 1998, including when the VP-elect was hospitalized in 2000 with a heart attack.

“I can list 1,000 questions,” Reiner added. “Not only is he a sitting president, but it’s an election. And we’ve never heard the full picture of his health — we’ve heard his own medical clearance note, which he wrote.”

One idea pushed by a Democratic congressman on Friday: that the White House should quickly announce regular, formal updates about the president’s condition, delivered by a non-political voice.

“I hope that the White House today will announce the ‘medical chain of command’ so that the public and Congress will know precisely who to listen to,” Rep. Jamie Raskin, a constitutional lawyer who has filed legislation in recent years intended to clarify the line of succession in an emergency, told POLITICO. “We need to have precision about who is in control of the executive branch at all times.”

Trump’s admission to Walter Reed on Friday night came after a day where he was barely seen and scarcely heard. The president stayed off Twitter, breaking his habit of tweeting in the morning from the White House residence. He skipped a scheduled phone call with state governors supporting seniors during the pandemic, delegating it to vice-president Mike Pence. And beyond an 18-second video released at 6:31 p.m., Trump eschewed any personal updates on his health status, leaving it instead to his surrogates and spokespeople.

Meanwhile, his campaign announced that all of Trump’s upcoming events were postponed.

Faust, the emergency physician, argued that he’s been pleasantly surprised by the amount of disclosure so far, including statements from the White House physician that detailed the president’s medications.

But one of those admissions — that Trump received a dose of Regeneron’s antibody cocktail, which is still in clinical trials — only invited further questions, Faust said.

“Getting that is bad news no matter what,” Faust added, warning that the decision to inject Trump wasn’t supported by any medical evidence. “Either that means his medical team is willing to give him medications that haven’t been shown to work in clinical trials, and they’re willing to gamble — or the situation is worse than we’ve been led to believe.”

The information about the Regeneron cocktail was contained in a memo released Friday afternoon by Sean Conley, who was leading the team of physicians at the White House monitoring the president. That memo described the president as “fatigued but in good spirits,” and a subsequent memo from Conley said that the president was doing “very well” at Walter Reed and did not require supplemental oxygen. Multiple media outlets reported that Trump’s condition was worse than the party line; CNN’s Jim Acosta quoted a Trump adviser who claimed that the president was having breathing problems, a common complication of Covid-19.

Some experts worried that Trump would be surrounded by hand-picked advisers and military medical officers who wouldn’t — or couldn’t — tell him what he needed to know if his condition worsened.

One example they cited: Ronny Jackson, the president’s former physician, who retired from the Navy and left the White House last year. Jackson, who was briefly tapped by Trump as his nominee to lead the Department of Veterans Affairs and is now running for Congress, extolled the president’s “good genes” to reporters after one check-up in 2018, claiming that Trump could have lived to “200 years old” with a better diet.

Jackson on Friday morning claimed on Twitter that Trump was “fine and completely asymptotic [sic.]”, scant hours before White House officials admitted that Trump had symptoms.

That behavior could be dangerous in the middle of a medical crisis, said Reiner, the longtime cardiologist to Cheney, who insisted that his famous patient never edited “a single punctuation mark” in his statements about Cheney’s heart problems and always wanted the unvarnished truth.

“Back when Cheney was vice president, I said to him, if you ever can’t fulfill the rigors of your job, you don’t have to ask me — I’ll tell you,” Reiner said. “But would a military officer tell Trump? I don’t know.”

Trump’s own inability to confront the truth also has shaded his handling of the coronavirus outbreak. Nagler, the University of Minnesota researcher, worked on a forthcoming study that found widespread public awareness of conflicting information about masks, drugs, and other aspects of the Covid-19 response. About 75 percent of Americans in late April said they were exposed to conflicting information about coronavirus, Nagler said — often driven by the president himself — and such exposure has the potential to confuse the public and contribute to a lack of trust in science.

“His role as an architect of misinformation and conflicting information is so pervasive,” Nagler said. “It’s almost a defining characteristic… it might sound like it’s nonsense at times, but the sowing of doubt is very intentional.”

Reiner, the longtime doctor to Cheney, said the time has come for Trump and his doctors to level with the American people. “If the president is really sick, there’s a lot of things coming down the pike, including the 25th Amendment,” Reiner added, alluding to the possibility that an ill Trump might need to be replaced by Pence.

“If you heard that the president was on high-flow oxygen or a respirator tomorrow morning, the vice president would need to take over,” he added. “These are the kinds of things the public should talk about. It’s less scary if we talk about it. We actually have mechanisms to deal with this.”

Kyle Cheney contributed to this report.