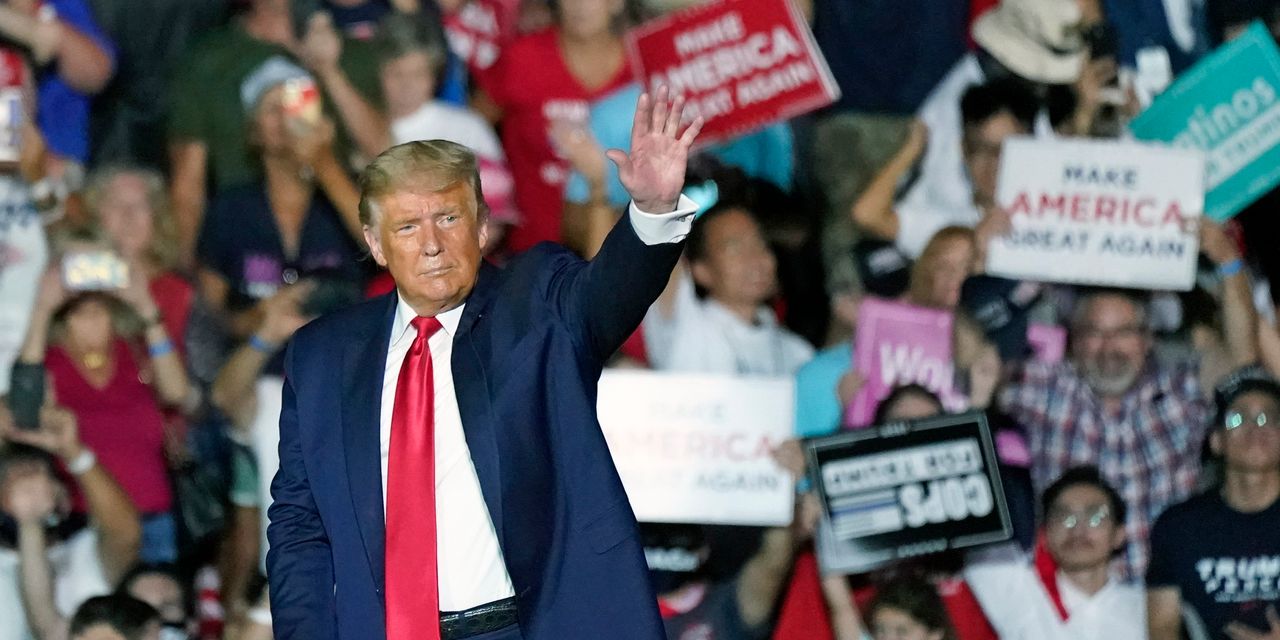 President Trump’s plan to send 33 million Medicare beneficiaries a card that can be used to help pay for as much as $200 in prescription drug costs won’t be completed until after the election, according to a person familiar with the plan.

The cards will be mailed in phases, with some likely going out later in October but most not until after the Nov. 3 presidential election, the person said. The Centers for Medicare and Medicaid Services is spending an estimated $20 million for administrative costs to print and send letters to Medicare beneficiaries informing them that they will be getting cards, the person said.

Plans for the overall drug-discount program have been sent to the Office for Management and Budget, the person said. It is unclear if or when the office will approve the program, which could cost $8 billion, the person said. The Centers for Medicare and Medicaid Services, which oversees Medicare designed for people 65 and older, is unable to say exactly when the cards will go out because the proposal is still at OMB. Beneficiaries will have two years to use the discount cards, the person said.

Low-income beneficiaries who don’t already get financial assistance for medications would likely get the cards, according to the person familiar with the planning, rather than everyone in Medicare Part D, which helps cover prescription drug costs for people 65 and older.

Mr. Trump surprised his own health-administration leaders on Sept. 24 when he announced the plan to mail out prescription drug cards. The discount cards were proposed by White House chief of staff Mark Meadows, said an administration official.

CMS officials rushed to figure out how the program could be structured and designed, according to two people familiar with the planning.

The proposed plan calls for funding the cards from two Medicare trust funds, according to the administration official. It would run out of a CMS office that tests new models for providing or paying for health care.

The program lets officials waive Medicare’s laws or standards to test if new initiatives increase efficiency and “economy of programs” without adversely affecting quality, according to CMS. These waiver programs have generally been required to show they won’t increase federal spending beyond what would have occurred without the test.

The drug-discount-card plan, for example, could be designed to test if people are more adherent to medications if they are given a discount, according to the administration official.

Democrats and other critics have said providing discounts doesn’t fit with the parameters or goals of the program, and they say it is unwise to tap the Medicare trust funds at the same time one of the funds is facing insolvency concerns.

Medicare is funded by two trust funds held by the U.S. Treasury. The trusts pay for hospital care and to administer the federal health-insurance program for people 65 and older and the disabled. They are funded through payroll taxes, income taxes paid on Social Security benefits and other sources.

The Medicare trust fund that pays for hospital care is expected to become insolvent by fiscal 2024, according to the Congressional Budget Office, two years earlier than projections done before the coronavirus pandemic. The other fund is on more solid financial footing.

The plan “raises serious legal questions about the misuse of taxpayer dollars to improperly influence the approaching election,” Democratic Reps. Frank Pallone of New Jersey and Richard Neal of Massachusetts and Sen. Ron Wyden of Oregon said in a letter Tuesday to Health and Human Services Secretary Alex Azar.

“We have received the letter and will respond directly to Congress,” an HHS spokeswoman said in response to the letter from the Democrats. HHS directed questions about plans for the cards to CMS, which didn’t respond to a request for comment.

White House spokesman Judd Deere said the plan “has nothing to do with politics. It’s good policy and demonstrates the president is continuing to deliver on his promises to our nation’s seniors.”

Some fiscal conservatives such as Chris Jacobs, founder of the Juniper Research Group, which provides health-policy analysis, have also criticized the idea, along with PhRMA, the drug industry’s main trade group. Mr. Jacobs wrote in an article for the Federalist, a conservative online news organization, that it was legally questionable.

Mr. Trump didn’t provide specifics about how the program would be funded or the legal authority allowing the federal government to send out the cards when he announced the plan. The Trump administration had sought to negotiate a similar discount-card program with drug companies, but PhRMA walked away from the discussions.