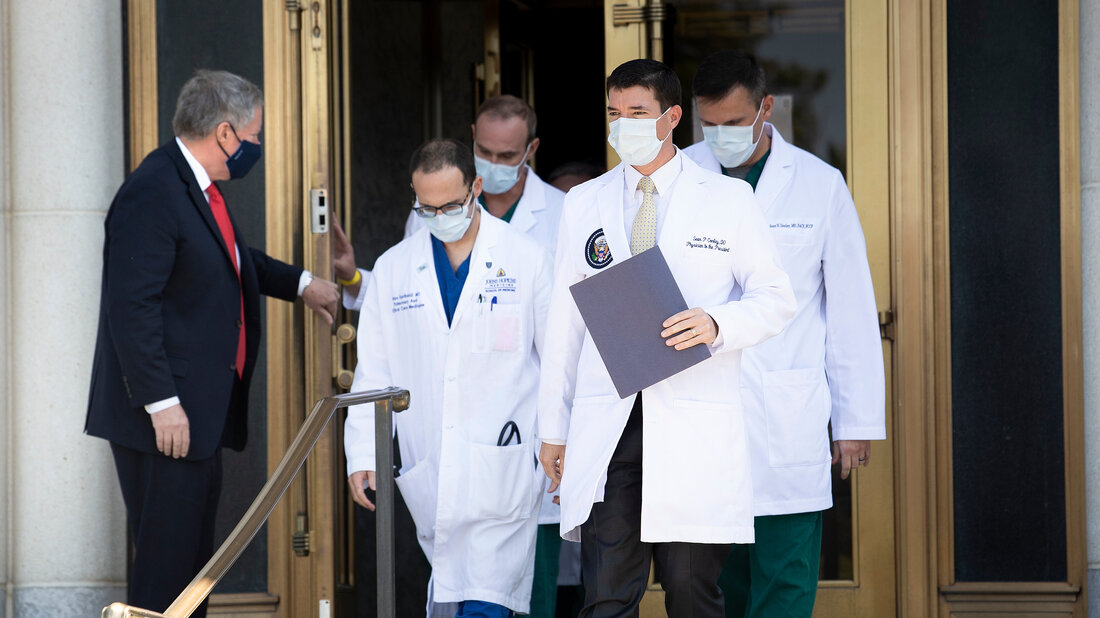 White House chief of staff Mark Meadows holds the door for White House physician Dr. Sean Conley (center) and other members of the president’s medical team ahead of a briefing for reporters on Sunday. 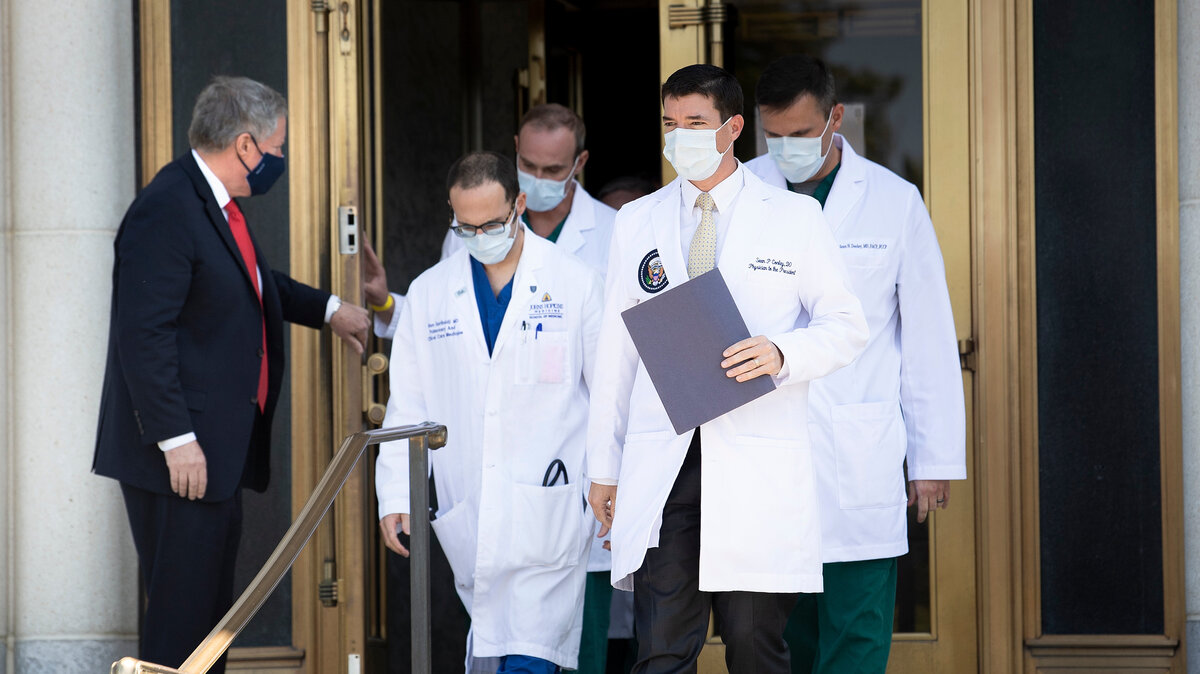 White House chief of staff Mark Meadows holds the door for White House physician Dr. Sean Conley (center) and other members of the president’s medical team ahead of a briefing for reporters on Sunday.

The doctors said that since testing positive for the coronavirus, Trump has had two episodes of a drop in oxygen — one Friday morning before he went to the hospital and again on Saturday — and began a steroid treatment for that specifically.

They also said that he is doing well and could return to the White House as soon as Monday. Trump said in a video message Saturday night that he had made the decision to go to Walter Reed’s presidential suite rather than being “locked up” at the White House.

Sunday’s update follows a Saturday briefing that caused confusion over the timeline of the president’s treatment. White House physician Sean Conley said Sunday that his attempt to evade questions Saturday about the president’s oxygen levels were not meant to hide information but that he was trying to project optimism.

Read a full transcript of Sunday’s remarks below.

CONLEY: Good morning, everyone. Since we spoke last, the president has continued to improve. As with any illness, there are frequent ups and downs over the course, particularly when a patient is being so closely watched 24 hours a day.

We review and debate every finding, compare it to existing science and literature, weighing the risks and benefits of every intervention, its timing, as well as any potential impacts a delay may have.

Over the course of his illness, the president has experienced two episodes of transient drops in his oxygen saturation. We debated the reasons for this and whether we’d even intervene. Is was the determination of the team based predominantly on the timeline from the initial diagnosis that we initiate dexamethasone.

I’d like to take this opportunity now, given some speculation over the course of the illness the last couple days, update you on the course of his — his own illness.

Given these two developments, I was concerned for possible rapid progression of the illness. I recommended [to] the president we try some supplemental oxygen, see how he’d respond. He was fairly adamant that he didn’t need it. He was not short of breath, he was tired, had the fever, and that was about it.

After about a minute on only 2 liters, his saturation levels were back over 95%. He stayed on that for about an hour maybe, and it was off and gone.

Later that day, by the time the team here was at the bedside, the president had been up out of bed moving about the residence with only mild symptoms.

Despite this, everyone agreed the best course of action was to move to Walter Reed for more thorough evaluation and monitoring.

I would like to invite up Dr. Dooley discuss the current plan.

Before I begin a brief clinical update on the president’s condition, I do want to reiterate my comments from yesterday regarding how proud I am to be a part of this multidisciplinary multi-institutional team of clinical professionals behind me and what an honor it is to care for the president here at Walter Reed National Military Medical Center.

Regarding his clinical status, the patient continues to improve. He has remained without fever since Friday morning. His vital signs are stable.

From a pulmonary standpoint, he remains on room air this morning, and is not complaining of shortness of breath, or other significant respiratory symptoms. He is ambulating himself walking around the White House medical unit, without limitation or disability. Our continued monitoring of his cardiac, liver and kidney function demonstrates continued normal findings, or improving findings.

I’ll now turn it over to Dr. Garibaldi from Johns Hopkins to talk about our therapeutics and again, our plan for the day.

BRIAN GARIBALDI, PULMONARY CRITICAL CARE DOCTOR: Thank you Dr. Dooley. I just wanted to again reiterate what an honor and a privilege it is to take care of the president and to be part of such a talented and multidisciplinary team here at Walter Reed.

The president yesterday evening completed a second dose of remdesivir. He’s tolerated that infusion well. We’ve been monitoring for any potential side effects. And he has had none that we can tell. His liver and kidney function have remained normal. And we continue to plan to use a five-day course of remdesivir.

In response to transient low oxygen levels, as Dr. Conley has discussed, we did initiate dexamethasone therapy, and he received his first dose of that yesterday, and our plan is to continue that for the time being.

Today he feels well, he’s been up and around. Our plan for today is to have him to eat and drink, be up out of bed as much as possible, to be mobile. And if he continues to look and feel as well as he does today, our hope is that we can plan for a discharge as early as tomorrow to the White House where he can continue his treatment course.

Thank you very much and I’ll turn it over to Dr. Conley for any questions.

CONLEY: The president wanted me to share how proud he is of the group, what an honor it is for him to be receiving his care here at Walter Reed, surrounded by such incredible talent, academic leaders, department chairs, internationally renowned researchers and clinicians, including the support of Dr. Garibaldi from Johns Hopkins. I’d like to reiterate how pleased we all are with the president’s recovery.

And with that, I’ll take your questions.

REPORTER: You said there were two instances where he had drops in oxygen. Can you walk us through the second one? And also I’ve got a question for the lung specialist afterwards.

CONLEY: Yesterday there was another episode where he dropped down, about 93%. He doesn’t ever feel short to breath, we watched it, and it returned back up.

As I said, we evaluate all of these, and given the timeline where he is in the course of illness, you know, we are trying to maximize everything that we could do for him and we debated whether we’d even start it — the dexamethasone, and we decided that, in this case, the potential benefits early on the course, probably outweighed any risks at this time.

REPORTER: Did you give him a second round of supplemental oxygen yesterday?

CONLEY: I’d have to, I’d have to check with the nursing staff. I don’t think that — if he did it was very, very limited. But he’s not on oxygen. The only oxygen that I ordered that we provided was that Friday morning, initially.

REPORTER: About what time was that yesterday?

CONLEY: Yesterday? What was yesterday?

REPORTER: You said the second incident —

CONLEY: The second incident? Oh it was over the course of the day. Yeah. Yesterday morning.

REPORTER: What is president’s current blood oxygen level? That’s my first question to you, Dr. Conley.

CONLEY: Yes, so we’re tracking all of that. There’s some expected findings, but nothing of any major clinical concern.

REPORTER: I wanted to ask if his oxygen level ever dipped below 90?

CONLEY: We don’t have any recordings here of that, that’s right.

REPORTER: What about at the White House or here, anything below 90, just to follow up on her question?

REPORTER: Yesterday you told us that the president was in great shape had been in good shape and paper free for the previous 24 hours. Minutes after your press conference, White House chief of staff Mark Meadows told reporters that the president’s vitals were very concerning over the past 24 hours. Simple question for the American people: Whose statements about the president’s health should we believe?

CONLEY: So, the chief and I work side by side, and I think his statement was misconstrued. What he meant was that 24 hours ago, when he and I were checking on the president, that there was that momentary episode of the high fever and that temporary drop in the saturation, which prompted us to act expediently to move him up here. Fortunately, that was really a very transient, limited episode. A couple hours later he was back up. Mild again. I’m not going to speculate what that limited episode was about so early in the course but he’s doing well.

REPORTER: What are the expected findings on his lungs and why is the president not wearing a mask in the videos and photos that have been released?

CONLEY: Well, the president wears a mask anytime he’s — he’s around us, and we’re all wearing our N95s, full PPE. He’s — he’s the patient, and when we can, when he’ll move out into public, we move him about out and around other people that aren’t in full PPE, I’ll assure you, as long as he’s still under my care, we’ll talk about him wearing a mask.

REPORTER: Is he in a negative pressure room? …

CONLEY: I’m not going to get into specifics of his care.

REPORTER: The lung function question? Can you talk about that —

CONLEY: I will just share that, like every patient, we perform lung spirometry on him, and he’s maxing it out. We told him, see what you can do, and it’s over 2,500 milliliters each time.

REPORTER: Why were you so reluctant until today to disclose that the president had been administered oxygen?

CONLEY: I was trying to reflect the upbeat attitude that the team, the president, that his course of illness has had. I didn’t want to give any information that might steer the course of illness in another direction. And in doing so, you know, it came off that we’re trying to hide something, which wasn’t necessarily true. …

The fact of the matter is, is that he’s doing really well, that he is — he is responding. And as the team said, if everything continues to go well, we’re going to start discharge planning back to the White House.

That’s it, thank you, folks.