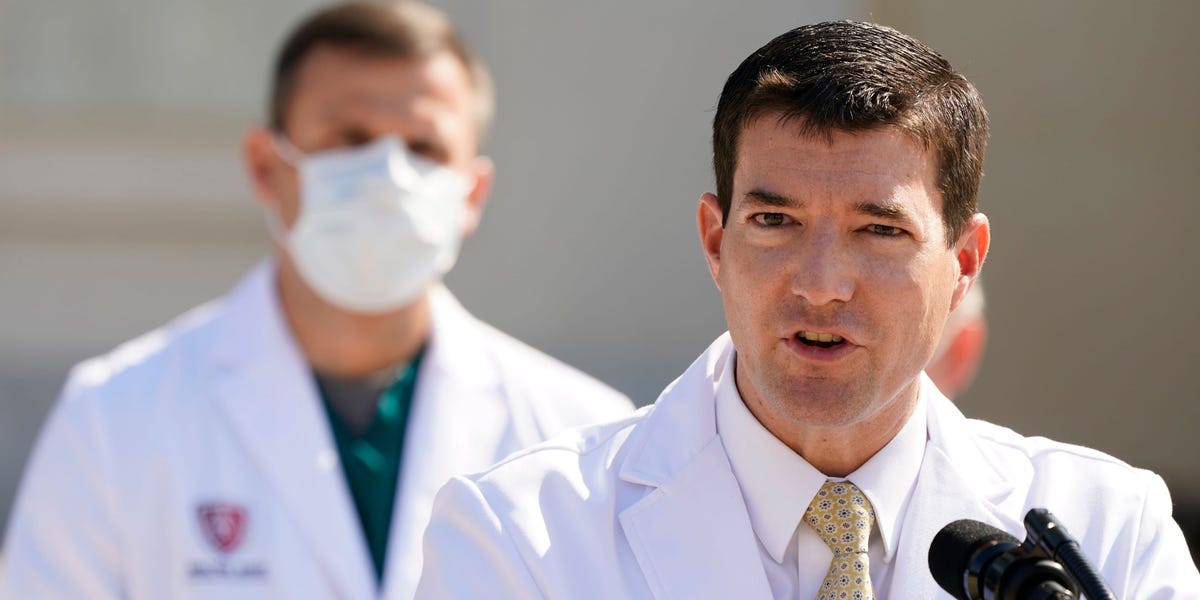 The public will likely never know all the details surrounding President Donald Trump’s battle with COVID-19.

His doctor, Sean Conley, declined to share key details about Trump’s health during a press conference on Monday, citing the Health Insurance Portability and Accountability Act of 1996 (HIPAA).

“I’m not at liberty to discuss,” Conley said when asked about Trump’s lung scans, adding, “there are HIPAA rules and regulations that restrict me in sharing certain things for his safety and his own health and reasons.”

Over the weekend, Conley and his team also would not say whether the president had gotten supplemental oxygen. They later acknowledged he had on two occasions. The likely reason for these omissions is that Conley is limited by the same privacy laws all doctors are: HIPAA stipulates that healthcare providers can’t share anything about a patient’s condition without their consent.

That means Conley can only reveal the information about Trump’s condition that the president allows.

“The ethics are stacked up against the public understanding, knowing, and really following what’s happening,” Arthur Caplan, professor of bioethics at New York University Gross School of Medicine, told Business Insider, “even though that’s crucial because we have president in denial about the disease and downplaying it at every turn.”

On Monday, Conley also declined to say when Trump last tested negative for the coronavirus. He wouldn’t give specifics about some of his medications either.

Even though being more forthcoming about the timeline of Trump’s infection would assist with contact tracing, Dr. Helen Boucher, chief of infectious diseases at Tufts Medical Center, said she understands why Conley isn’t doing so.

“As physicians we have a duty to maintain our patients’ confidentiality,” she told Business Insider.

HIPAA makes it illegal for doctors to disclose sensitive patient health data without the patient’s agreement. If doctors do share such information without patients’ consent, they could lose their license, go to jail, or face fines.  So everyone, including Trump, must give healthcare providers permission to discuss their cases — or can choose not to.

“Physicians’ code of ethics and duty to their patients hinges on not revealing what they don’t want revealed,” Caplan said. “There’s no exception for the president.”

If anything, he added, the pressure to maintain confidentiality is heightened for Conley.

“The assumption of privacy is being reinforced by the power of the Commander-In-Chief asking for it,” Caplan said, adding, “traditionally, sadly, the White House has always spun medical information for political purposes.”

So by refusing to reveal whether any of the president’s scans were abnormal and when his last negative test result came in, Conley was likely following his patient’s orders.

“The spokesperson is only as good as the person they’re speaking on behalf of. If there is pressure to say certain things and not to say certain things, that could be part of the game as well,” Peter Chin-Hong, an infectious-disease specialist at University of California San Francisco, previously told Business Insider.

There’s no law saying that presidents must release details about their health to the public.

Instead, it has become something they do voluntarily. Presidents going back to Ronald Reagan have released some of their medical information, though in no uniform format. Presidential candidates also commonly do this when running for office, though again, it’s not a requirement and they control what information their doctors offer.

When Trump was running for president in 2016, his longtime physician, Dr. Harold Bornstein, wrote a letter declaring that Trump “will be the healthiest individual ever elected to the presidency.”

Members of Congress have considered forcing presidents and candidates to be more transparent about their health given the power they wield, but no proposals have received widespread political support.

Proponents of evaluating politicians’ fitness point out that it’s a common practice in other jobs, such as for airline pilots and members of the military. But those opposed understand that a requirement to reveal medical histories could bring to light unfavorable things in leaders’ or candidates’ pasts, such as a history of drug use or sexually transmitted infection.

In 2018, Democratic Rep. Brendan Boyle of Pennsylvania tried to change the rules about access to a president’s medical records. Boyle introduced the Stable Genius Act, which would obligate each political party to file a Federal Election Commission report certifying that their nominee had received an exam from the medical office of the secretary of the Navy.

The year prior, Rep. Jason Chaffetz of Utah, who was chairman of the House Oversight Committee at the time, said he was considering introducing legislation that would require presidents to undergo an independent physical and mental health exam.

But it’s unlikely, Caplan said, that such laws would pass — even amid an unprecedented pandemic.