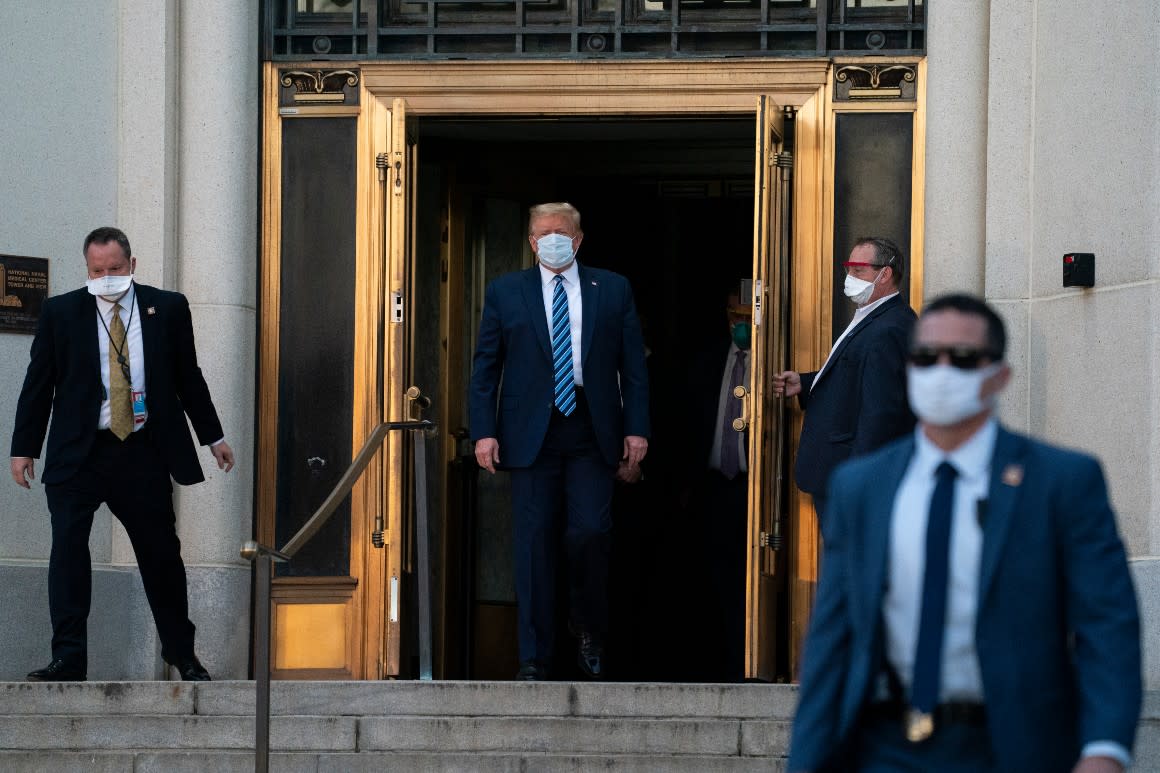 President Donald Trump “continues to do extremely well” upon returning to the White House after being hospitalized with Covid-19, according to a new assessment from his personal doctor that provided few substantive details about the president’s health.

In a memo released on Tuesday afternoon by the White House, physician to the president Sean Conley wrote that Trump’s medical team met with him that morning in the Executive Residence, where he “had a restful first night at home, and today he reports no symptoms.”

The president’s vital signs remain stable with an oxygen saturation level of 95-97 percent, Conley reported, and “he continues to do extremely well” overall.

But that was the extent of the medical information provided by the White House’s top doctor in his first update since the president was discharged Monday evening from Walter Reed National Military Medical Center.

Noticeably absent from Conley’s memo were other clues about Trump’s health that reporters and public health experts have sought in recent days, including the condition of his lungs after being battered by an acute respiratory disease and the definitive timeline of his Covid-19 tests.

Trump, for his part, insisted on Twitter that he was “FEELING GREAT” while attacking political rivals and reprising a dubious comparison he had repeatedly invoked in the early stages of the U.S. outbreak.

“Flu season is coming up! Many people every year, sometimes over 100,000, and despite the Vaccine, die from the Flu,” Trump wrote. “Are we going to close down our Country? No, we have learned to live with it, just like we are learning to live with Covid, in most populations far less lethal!!!”

In fact, the most deaths to have resulted from a flu season in the U.S. over the past decade is estimated to be roughly 61,000 in 2017-2018, according to data from the Centers for Disease Control and Prevention — well below the president’s claim of 100,000 or more.

And while flu strains change from year to year, varying in severity, most people have some underlying immunity based on prior exposure. The coronavirus was only identified late last year.

Trump himself appeared to tell The Washington Post’s Bob Woodward in a February interview that the coronavirus was five times more lethal than the flu, saying that Covid-19 is “deadly stuff” and “more deadly than … even your strenuous flus.”

Senior health officials have warned that that the fall and winter months could significantly strain the nation’s health care system as it grapples with both a potential resurgence of the coronavirus and its yearly fight against the flu.

Twitter and Facebook, where Trump posted a message identical to his tweet, took steps to stop the spread of the president’s missive a few hours after it was shared with his millions of followers.

Facebook removed the post for violating rules against misrepresenting the severity of the coronavirus, a spokesperson said, while Twitter slapped a notice on the tweet for containing misinformation and restricted others from liking or sharing it.

Trump’s tweet resembled other messaging from the president in the past 24 hours that has been dismissive of the disease’s threat — even as he has received two rounds of oxygen therapy, two experimental drugs — including one that is not available to the broader patient population — and one steroid generally reserved for severe or critical Covid-19 cases.

Trump also was treated by a top team of physicians in the presidential quarters of a military hospital.

Ahead of his departure from Walter Reed National Military Medical Center, Trump tweeted on Monday afternoon that Americans should not “be afraid of Covid” and should not “let it dominate your life.”

When he returned to the White House on Monday evening, the presumably still-contagious president ascended the steps to the Truman Balcony and removed his mask to pose and salute for the cameras before entering the executive mansion.

And in a video message posted to Twitter later Monday night, Trump claimed he might be “immune” from the coronavirus — despite testing positive for Covid-19 last week — and again urged Americans: “Don’t let it dominate. Don’t let it take over your lives.”

During his hospital stay, the president seemed to project that he was taking the disease somewhat more seriously than he had prior to his diagnosis. On Sunday, he said that his sickness had “been a very interesting journey” and that he had “learned a lot about Covid.”

“I learned it by really going to school,” Trump said in a video message posted to Twitter. “This isn’t the ‘let’s-read-the-book’ school. And I get it. And I understand it. And it’s a very interesting thing. And I’m going to be letting you know about it.”

Meanwhile, the president’s top aides and campaign staff have argued that Trump being infected with Covid-19 will equip him to better confront the pandemic and empathize with affected Americans.

“Now, I think the president is able to, you know, talk from the heart [about] how Covid has impacted him, has impacted his family and his staff, his closest staff,” Trump campaign senior adviser Mercedes Schlapp said on Monday.

White House chief of staff Mark Meadows said on Monday that Trump is “understanding what millions of Americans have had to face,” and Trump campaign spokesperson Erin Perrine implied Democratic presidential nominee Joe Biden was less qualified to discuss the coronavirus because he had not been infected.

“He has experience now fighting the coronavirus as an individual,” Perrine said on Monday of Trump. “Those first-hand experiences, Joe Biden, he doesn’t have those.”

On Tuesday afternoon, however, Trump appeared reluctant to embrace the coronavirus as a campaign issue, complaining that the “Fake News Media” refuses to cover the economy. “All they want to discuss is COVID 19,” he tweeted.

Trump also tweeted that he was “looking forward” to participating in the next presidential debate in Miami, even though his presence could still potentially expose Biden to infection.

Steven Overly contributed to this report.