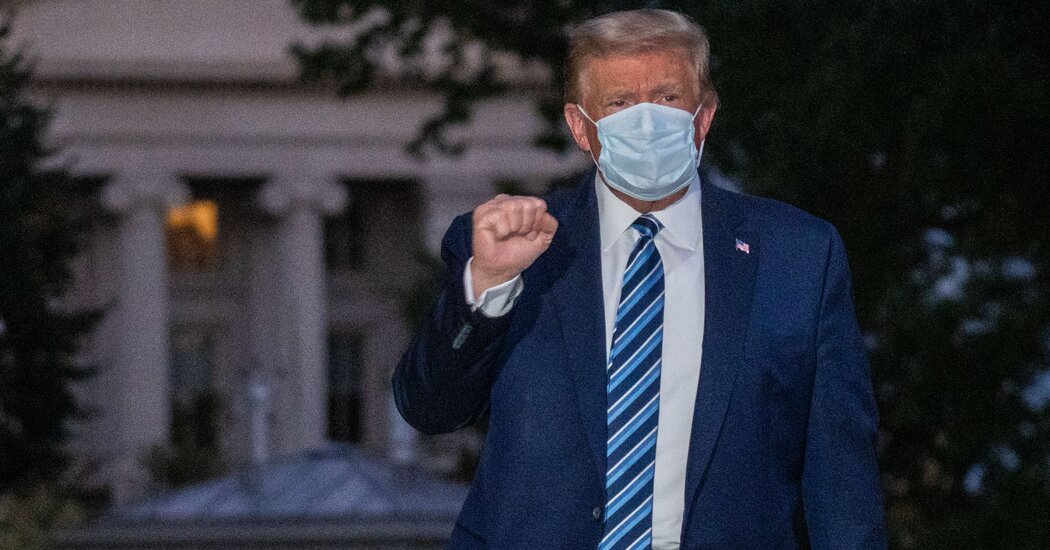 Good morning. (Was this email forwarded to you? Sign up here.)

President Trump has returned to the White House after a three-day stay at Walter Reed National Military Medical Center for treatment of his Covid-19 infection. But speculation that he might adopt a more cautious attitude toward the disease was quickly erased.

“Don’t let it dominate your lives,” Mr. Trump said of the coronavirus in a video recorded at the White House last night. “Don’t be afraid of it. You’re going to beat it.” Meanwhile, his administration is blocking proposed federal guidelines requiring strict scrutiny of potential Covid-19 vaccines, which he described in the video as coming “momentarily.”

His words may pose problems for business reopenings. They could make some people more cavalier about coronavirus protection measures, including at the office, said Robert Rabin of Stanford Law School. (“We’re going back to work,” Mr. Trump said. “Get out there.”) This raises questions about employers’ and business venues’ liability for infections, as Republicans continue to advocate a legal liability shield for companies as part of any stimulus deal.

• The purpose of liability law is to incentivize responsible behavior by making irresponsibility costly, said Justin Wolfers, a professor of economics and public policy at the University of Michigan. “We’d expect to see many more irresponsible choices being made” by those taking the president’s comments to heart, he said.

What happens next? Mr. Trump said he would return to the campaign trail “soon,” with polls taken after his diagnosis showing no sympathy bounce. The stock market is up from its level before the president’s test was announced, which many take as a sign that investors are pricing in odds of a more decisive victory by Joe Biden, reducing fears of a contested result.

• A “blue wave” result, in which the Democrats control all arms of government, would result in higher corporate taxes and special levies on foreign income, which would hit high-flying tech firms the hardest. At the same time, unified control would make a big stimulus bill more likely, which would “at least match the likely longer-term tax increases on corporations and upper-income earners,” Jan Hatzius, Goldman Sachs’ chief economist, wrote in a new research note.

Gov. Andrew Cuomo blocks neighborhood lockdowns in New York City. The New York governor said Mayor Bill de Blasio’s plan to shut nonessential businesses where infection rates were rising would have been ineffective. It’s the latest conflict between the governor and the mayor, adding to the angst and uncertainty around New York’s economy.

The I.R.S. is reportedly investigating the National Rifle Association’s chief for criminal fraud. At issue is whether Wayne LaPierre underreported his income by not declaring benefits like yacht trips and safaris, according to The Wall Street Journal.

Bristol Myers Squibb makes a big move into heart treatments. The pharmaceutical giant struck a $13 billion deal to acquire MyoKardia, in part to diversify away from cancer drugs after buying Celgene for $74 billion last year.

A House report on tech giants’ power is held up over politics. Democratic staff on the House Judiciary Committee delayed publishing the findings from a 15-month investigation into the dominance of Alphabet, Amazon, Apple and Facebook after Republicans refused to sign on, The Times reports. Reining in tech companies had been a bipartisan priority, but the parties now look to be taking different approaches.

The editor of The Los Angeles Times is stepping down. Norman Pearlstine, a veteran journalist, will begin looking for a successor, two years after the billionaire Patrick Soon-Shiong bought the newspaper for $500 million, and two weeks after it published a scathing self-reflection on its ethical and management shortcomings.

The movie theater industry is on the brink

Shares in movie theater chains plunged yesterday after Cineworld said it would shut its venues in the U.S. and Britain for at least two months, after the latest James Bond movie was delayed. Even more blockbusters were rescheduled after the announcement.

Cineworld’s stock fell as much as 60 percent after its move, which affects 663 venues and 45,000 employees. Shares in its main rival, AMC, fell as well.

• Last Friday, S&P downgraded AMC’s credit rating two notches deeper into junk status, saying that the chain could run out of liquidity in six months unless movie attendance improves. And Cineworld must find ways to service $8.2 billion in net borrowing.

The problem — no new movies — is only getting worse. After the Cineworld announcement, Warner Bros. rescheduled two more big releases, pushing “Dune” from December to next October, and “The Batman” (already delayed after its star, Robert Pattinson, contracted Covid-19) from October 2021 to 2022. The latest Wonder Woman movie is still due around Christmas, but who knows for how long?

• “If the studios continue postponing all their releases, the movie theaters aren’t going to be there for those postponed releases,” the head of the National Association of Theatre Owners told The Times.

PayPal and Just Capital are launching an initiative today to encourage companies to rank employees’ financial security on par with other priorities. They are providing tools that managers can use to measure whether their employees might struggle to make ends meet.

DealBook spoke with Dan Schulman, PayPal’s C.E.O., and Just Capital’s co-founder Paul Tudor Jones about the importance of livable salaries — and what it’s like to realize your own employees aren’t making enough to get by.

Employers may discover “a different reality than what you might expect,” Mr. Schulman said. After PayPal spun out of eBay, Mr. Schulman conducted an internal pay audit, looking at how much cash workers had after essential living expenses and tax. PayPal already paid at or above market rates, so he assumed he would be able to show off positive results at an all-company meeting. But in fact, almost two-thirds of the company’s call-center and entry-level workers “were struggling to make ends meet at the end of the month,” Mr. Schulman said.

• It was a sign that “you can’t count on the market because the market isn’t working for a large segment of our population,” he said.

They argue fair pay is good for business — and shareholders. “What we have to do is get away from this mentality that I’ve got to keep my labor costs as low as I possibly can,” said Mr. Tudor Jones, “because the only purpose of a business is to make a profit à la Milton Friedman.” He and Mr. Schulman argue that higher pay boosts the economy and helps companies recruit, both important factors for long-term success.

• “So many great C.E.O.s,” Mr. Tudor Jones said, “spend a lot of their time philanthropically when, in actuality, the first place to start is under the own roof of your business.”

Chamath Palihapitiya’s blank-check company, Social Capital Hedosophia Holdings, is acquiring Medicare Advantage insurance company Clover, in a deal valuing the company at $3.7 billion. The deal includes up to $1.2 billion in cash proceeds, $400 million of which will be through a private investment in the public entity, or PIPE, led by Mr. Palihapitiya, the billionaire former Facebook executive turned tech investor.

Clover considers itself primarily a tech company. It was founded in 2013, and sells Medicare Advantage plans in counties that include rural or underserved areas, while also offering physicians software that it says aggregates key data to improve care and cut costs. “What makes us different — and why I think we get along with Chamath — is we offer technology first, not technology-enabled,” said Andrew Toy, Clover’s president and chief technology officer. That said, the company laid off about a quarter of its employees last year as it sought to hire more health experts. “Technology can solve a lot of problems, but it can’t solve all problems right at the same time,” Mr. Toy said of the move.

• Clover will add scale with the cash it’s getting from the deal, helping it achieve profitability, a goal it hopes to meet by 2023.

Third time’s the charm. The SPAC merging with Clover is the third such deal by Mr. Palihapitiya, following the real estate start-up Opendoor and the space tourism company Virgin Galactic. (The investor is also raising $2 billion for three more SPACs.) Mr. Palihapitiya said he is taking a portfolio approach to selecting targets, with the common ingredient being bets on technology. He stressed that he is putting money at risk: Social Capital Hedosophia has invested $453 million of personal capital across the three deals, a big chunk of the $3 billion it raised in total.

• “I have put a lot of money on the line in the hopes these businesses can, frankly, do good things in the world. And if they do good things, I would like to profit from them as well,” Mr. Palihapitiya said.

Nearly 16,000 positive coronavirus cases recently went unrecorded in England’s tracking system, officials said yesterday. The glitch led to an undercount of the country’s tally and a delay in tracing infected people’s contacts, leaving tens of thousands of people in the dark about their potential exposure.

The system was felled by a spreadsheet glitch. It relies on files formatted for an older version of Microsoft Excel, which can only handle a certain number of cells. When key files got too big, thousands of entries were skipped. As the government’s central dashboard began to show suspiciously fewer cases than other sources, techies identified the problem. To fix it, large files are now split before feeding them into the system — in other words, more spreadsheets.

It’s another entry in the annals of Excel horror stories. Spreadsheets’ power comes from their flexibility, which also makes them dangerous. Spreadsheet snafus have thwarted genetic research, enabled billion-dollar trading losses and led to misguided notions about fiscal austerity, among other things. That England’s much-maligned test-and-trace system succumbed to such a mundane error — and that it relied so heavily on spreadsheets at all — led to geeky humor that might be amusing, if it weren’t so serious.

• The former co-C.E.O. of Bridgewater Associates, Eileen Murray, has settled a lawsuit against the hedge fund over $100 million in pay she said was being improperly withheld. (WSJ)

• Icon Health & Fitness, the owner of the NordicTrack brand, raised $200 million from investors like L Catterton at a $7 billion valuation. (Bloomberg)

• Faraday Future is the latest electric vehicle maker seeking to go public by merging with a blank-check fund. And Romeo Systems, which makes batteries for electric cars, will merge with a SPAC in a $1.3 billion deal. (Reuters)

• Bankers and investors are hoping to bring SPACs to the London stock market. (FT)

• Robert Lighthizer, the U.S. trade representative and one of Washington’s toughest critics of China, has become a defender of Beijing in hopes of salvaging a trade deal. (NYT)

• How President Trump’s promises to save the coal industry have fallen short. (NYT)

• What Google and Oracle’s Supreme Court battle means for the future of the software industry. (Protocol)

• Nvidia pledged to build a new supercomputer in Britain as part of its efforts to secure approval for its $40 billion takeover of the British chip designer Arm. (FT)

Best of the rest

• Given the virus, wildfires and high cost of living, companies ask: Is California worth it? (NYT)

• Vorayuth Yoovidhya is the heir to the Red Bull fortune. He’s also sought by Interpol. (NYT)

Thanks for reading! We’ll see you tomorrow.