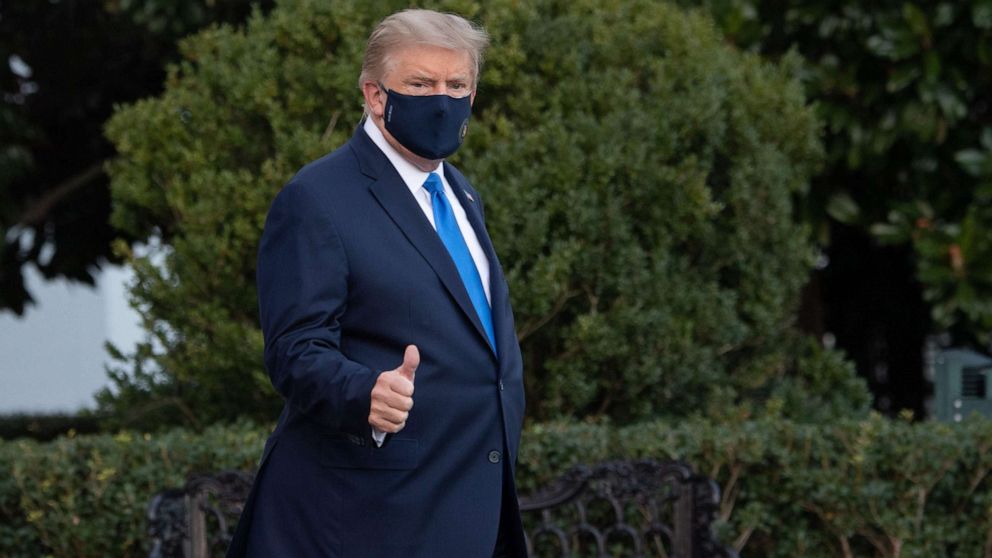 The chaos that enveloped Washington on Friday was in some ways distinctly Trumpian. There were surreal headlines, earth-rattling surprises and a general air of crisis impacting all three branches of government.

Missing from the uncertainty and insanity, though, was President Donald Trump himself. His silence amid the shockwaves served as a chilling reminder that everything about his presidency — and perhaps even about the nation’s stability — was suddenly at stake.

A presidency that has so often devolved into pettiness and name-calling now confronts a deeply personal crisis that expands into the nation’s health and security. An election that could have been about any number of small things is suddenly about one very big thing again — with the president’s health among the unpredictable factors.

From the standpoint of governance, a White House that has casually trafficked in mistruths and misleading statements now faces a yawning credibility gap at a moment that the president is in a hospital with a potentially fatal illness.

Hours after the president made his positive test known in the middle of the night, the White House said the president was suffering from “mild symptoms” and fatigue — alarming acknowledgments to many seasoned Trump-watchers.

Concerns about the true nature of his condition were seemingly ratified by a late afternoon trip to Walter Reed Medical Center. After a long televised wait on the White House lawn, a helicopter whisked away the 74-year-old president for tests and evaluations and a stay that White House officials say could last a few days.

Earlier in the day Friday, lawmakers and administration officials tried to portray business as usual. There were meetings on another stimulus bill, and scattered Trump-world tweets about new job figures.

Trump aides cycled through the White House grounds to talk about the economy, trade and assorted matters with reporters. Most of those aides showed up without masks, still and again.

Republican lawmakers talked up the confirmation chances of Supreme Court nominee Amy Coney Barrett. Meanwhile, a key senator who was at her Rose Garden announcement ceremony last weekend, Mike Lee, announced that he, too, had COVID-19.

From a political standpoint, the barrage of news virtually ensures that the final 32 days before Election Day will be dominated by discussion of the COVID-19 crisis. With voting already well underway, Trump is sidelined from the campaign trail for the foreseeable future, in a race where he trails in the polls and wants to be talking about anything other than the very disease he’s now fighting.

Now, former Vice President Joe Biden is out campaigning while Trump — who spent months poking fun at Biden for staying in his “basement” — is isolating.

Biden chose to keep a campaign appointment in Grand Rapids, Michigan, after twice testing negative for COVID-19 on Friday. He offered prayers for the recovery of the president and first lady Melania Trump, but also called on all Americans to wear masks — and chose to highlight inequities in testing and treatment.

“It’s a bracing reminder to all of us that we have to take this virus seriously. It’s not going away automatically,” Biden said, wearing a mask throughout his speech. “It’s not about being a tough guy. It’s about doing your part.”

A reality-star president who knows the power of television so well might acknowledge the power of his own images. It was just Tuesday night where, at a debate that devolved into a Trumpian insult-fest, the president mocked Biden for doing exactly what health officials in his own administration have long recommended.

“Every time you see him, he’s got a mask,” the president said. “He could be speaking 200 feet away from them and he shows up with the biggest mask I’ve seen.”

As late as Thursday evening, in a pretaped video address that aired just hours before his positive COVID test was made public, Trump declared, “The end of the pandemic is in sight.”

Trump has effectively gambled his presidency on claims that COVID-19 isn’t that much of a threat — or, alternatively, that his leadership defeated the pandemic and has sparked an economic recovery. There’s a danger now for Democrats in being seen as publicly rejoicing in the apparent ironies of this moment.

Perhaps the worst presidential health crisis in three decades is a jolting occasion that’s larger than politics, even with barely a month before Election Day. The Biden campaign said it was pulling down attack ads for the time being, though Trump allies on social media kept up their attacks on Biden, jumping on his decision to continue to campaign.

Squeezed into the past week were developments that could fill volumes. Since last Friday, the late Justice Ruth Bader Ginsburg became the first woman to lie in state at the Capitol; the president nominated her potential replacement; Trump and Biden debated for the first — and perhaps last — time; and the president and first lady were diagnosed with a potentially fatal disease that has killed more than 200,000 Americans and counting.

The president may bear responsibility for aspects of the state of the nation’s health — both physical and mental — at the moment. But cures are elusive, and Washington’s longstanding dysfunction is now exacerbated by panic about who else might be infected.

Finally, and perhaps sadly, the self-described “cheerleader for the country” brought no cheer; the only words he spoke on camera Friday were part of a brief video he filmed thanking supporters for their kind wishes. There was perhaps nothing more eerie on this extraordinary day than the sound of Trump’s silence.