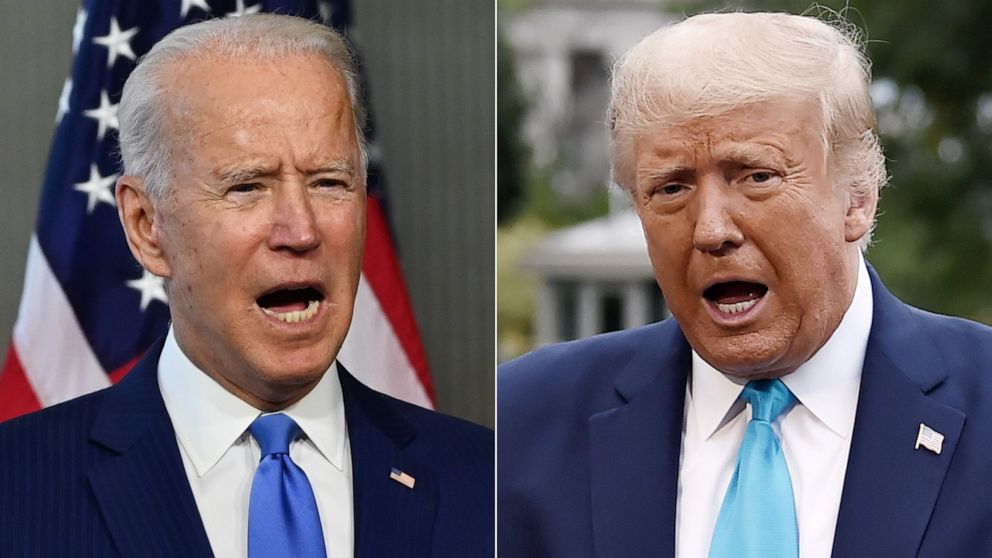 Climate change — a hot-button topic for years — has taken on renewed significance ahead of the 2020 presidential election, with wildfires decimating the West, tropical storms pounding the Gulf Coast and year after year of record temperatures.

Throughout his presidency, Trump reversed many American commitments to mitigating climate change, most notably pulling out of the Paris Agreement, removing clean water protections and seeking to fast track environmental reviews of dozens of major energy and infrastructure projects, such as drilling, fuel pipelines and wind farms.

Biden has countered the Trump administration’s policies by promising to protect the environment with a proposed a $5 trillion plan.

Here is where each candidate stands on the issues:

The Trump administration considers drinking water quality around the world a bigger crisis than climate change, Environmental Protection Agency (EPA) Chief Andrew Wheeler said in April. Safe drinking water, plastic pollution and other litter in the oceans, drought in western states and water infrastructure are “the largest and most immediate environmental and public health issues affecting the world right now,” Wheeler said in remarks in Washington on World Water Day.

However, in January Trump removed Obama-era clean water protections intended to protect rivers, streams, wetlands and other bodies of water from pollution and runoff from industrial facilities and agriculture. The move finalized Trump’s signature campaign promises to farmers and others who claimed the regulations were too burdensome.

Under the EPA’s new rules, the federal government no longer protects streams that only flow during some parts of the year or after heavy rain, or wetlands that are not connected to larger bodies of water. Federal protections for navigable waters such as major rivers and lakes and any tributaries and wetlands that flow directly into them remained.

Biden has pledged to ensure all communities have safe drinking water and to prevent pollution of water in vulnerable communities — such as Flint, Michigan — by taking action against fossil fuel companies “and other polluters” that “put profit over people” by knowingly harming the environment or conceal information regarding potential environmental and health risks, according to his campaign website.

In addition, during his time in the Senate, Biden co-sponsored the Ocean-Dumping Ban Act of 1988, which prohibited dumping sewage, sludge and industrial waste.

While visiting California amid devastating wildfires raging up and down the West Coast earlier this month, Trump expressed skepticism that climate change was to blame.

Crowfoot appeared stunned when he replied, “I wish science agreed with you,” to which Trump retorted, “I don’t think science knows actually.” Trump’s repeated attacks on scientists and science have drawn scorn and alarm from the community.

In 2018, Trump said he didn’t “believe” a major federal report’s findings — from 300 experts, including from 13 federal agencies — that climate change would hurt the economy.

Biden blasted Trump for his comments about the California fires during a speech in Wilmington, Delaware, centered around his plans to combat climate change and how the effect is worsening extreme weather events around the world.

Biden is supporting the Green New Deal, a sweeping proposal by Democrats that suggests dramatic solutions in response to alarming findings of recent climate change reports, solutions such as bringing carbon emissions all the way down to net-zero.

Biden’s plan to address the climate emergency would aspire to a 100% clean energy economy and reaching net-zero emissions no later than 2050, according to his campaign website.

Trump’s policies have largely gravitated toward an expansion of oil and gas drilling.

His administration sought in 2018 to open 90% of coastal areas under federal control for offshore drilling, but that plan was put on hold in 2019 after a legal decision stating that a ban of offshore drilling in some areas, which was put in place by former President Obama, could not be lifted.

In August, Interior Secretary David Bernhardt announced that the administration would allow oil and gas drilling on more than 1.5 million acres on the coast of the Arctic National Wildlife Refuge. While the plan included restrictions to protect wildlife in the area, it came after decades of controversy over concern that the drilling would disrupt the pristine wilderness and native tribes in the area.

However, earlier this month Trump expanded a ban on drilling sites off the Atlantic Ocean, likely to appeal to voters in coastal states, such as all-important Florida, according to The Associated Press.

Biden has promised on his campaign website to pursue a global moratorium on offshore drilling and reminded voters that under the Obama-Biden administration large parts of the Atlantic and Arctic Oceans were banned for drilling.

The Democratic nominee supports banning new oil and gas permits on federal land. The ban would include fracking, according to his campaign.

One of Trump’s campaign promises during the 2016 election was to roll back environmental regulations put in place by the Obama administration.

The EPA spent its first year under Trump carrying out executive orders to repeal regulations and reexamining landmark environmental policies. It also began a process to repeal the Clean Power Plan, which would impose restrictions on greenhouse gas emissions from power plants.

The administration also lowered fuel economy goals, took away California’s ability to set its own emissions standards and changed methane venting and flaring rules, according to the Brookings Institution.

Biden has proposed an ambitious solution for the production of clean energy, which would involve a $1.7 trillion investment in clean energy over the next 10 years and move the nation rapidly toward a quick reduction of its reliance on fossil fuels.

The plan would also include establishing an Environmental and Climate Justice Division within the Department of Justice and overhauling the EPA External Civil Rights Compliance Office, as part of a path to overhaul the government’s current environmental justice policy, to bring justice to those most impacted by climate change.

Working with other countries to cut down on emissions

Trump first announced in 2017 that he would remove the U.S. from the Paris Agreement, the accord created by the United Nations Framework Convention on Climate Change in December 2015 with a goal to ensure that global temperatures do not increase more than 2 degrees Celsius (3.6 degrees Fahrenheit) above pre-industrial levels, which the U.N. refers to as the period between 1850 and 1900.

Trump criticized the agreement, stating it imposed an unfair burden on the U.S. and that is has done little to slow down emissions from other countries.

The withdrawal will take effect on Nov. 4 — one day after the presidential election.

Trump is on track to preside over one of America’s sharpest drops in fossil fuel emissions — 10% for 2020, according to a projection by the Energy Information Administration. That decrease, which the EIA says is due to the COVID-19 pandemic, represents the largest drop since the 2008 recession, which saw a 7.3% decline.

Biden’s campaign website says the candidate will “rally the rest of the world to meet the threat of climate change” and recommit the U.S. to the Paris Agreement.

“He will lead an effort to get every major country to ramp up the ambition of their domestic climate targets,” the website states. “He will make sure those commitments are transparent and enforceable, and stop countries from cheating by using America’s economic leverage and power of example.”