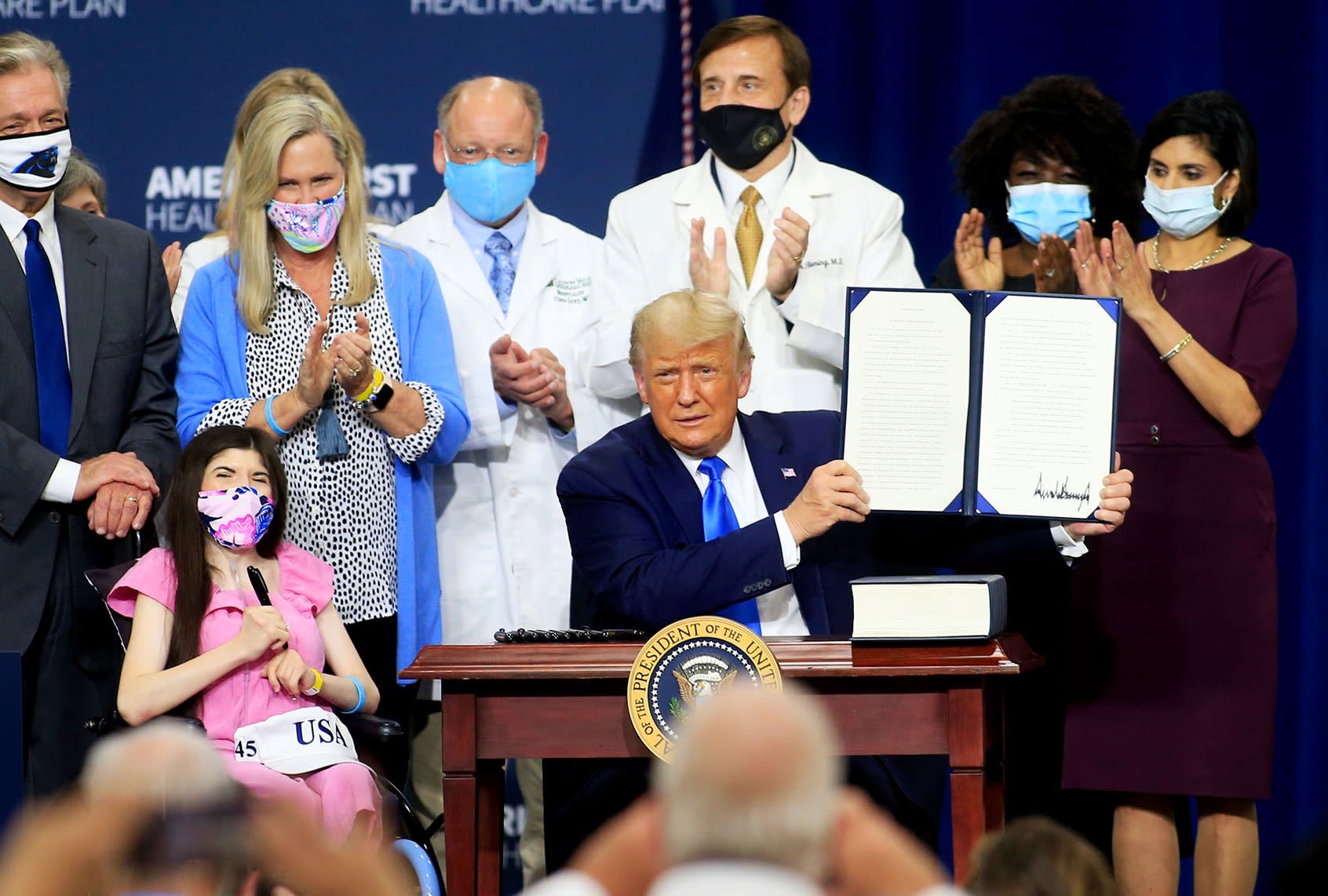 U.S. President Donald Trump reacts after signing an executive order following his remarks on his healthcare policies on September 24, 2020 in Charlotte, North Carolina. Trump’s trip to North Carolina marks his fifth time in the state within the last 30 days. Brian Blanco/Getty Images

President Donald Trump unveiled his long-anticipated health care “plan” on Thursday, but it was comprised of only two toothless executive orders. Journalists and politicians alike were quick to point out that the pair of orders did not actually compromise a “plan” at all, as they were merely “requests for legislation.”

Trump, who repeatedly failed to repeal the Affordable Care Act despite years of promises, claimed on Thursday that “Obamacare is no longer Obamacare” after Republicans tossed the individual mandate penalty. He made the comment while rolling out his “America First Health Plan,” which The Washington Post noted was not actually a “plan.”

“We’ve really become the health-care party — the Republican Party,” Trump claimed during a speech in Charlotte, N.C. “But nobody knows it.”

The first executive order declares protecting patients with pre-existing conditions to be the “policy” of the U.S. But protections for pre-existing conditions were previously enshrined into law through Obamacare, legislation which the Trump administration is currently pushing to overturn in court after failing to do so in Congress.

“The historic action I’m taking today includes the first-ever executive order to affirm it is the official policy of the United States government to protect patients with pre-existing conditions,” Trump claimed on Thursday, despite trying to overturn the law which actually established those protections.

“We’re making that official. We’re putting it down in a stamp,” Trump added, even though it was already “official” in a law which has been on the books for a decade.

Julie Rovner, the chief Washington correspondent at Kaiser Health News, pointed out that Trump’s executive order would do nothing if the Obamacare lawsuit backed by his administration succeeds.

“This. Requires. Legislation,” she tweeted.

The health care news outlet Stat News described Trump’s speech as “empty rhetoric,” which would neither “improve the quality of Americans’ health care or lower its cost.”

“The speech and executive order stood as a tacit admission that Trump had failed to keep his 2016 promise to replace his predecessor’s signature achievement with a conservative alternative,” Washington Post reporter Toluse Olorunnipa wrote. “Unable to repeal the law, Trump appeared open to simply rebranding it.”

The other executive order directs Secretary of Health and Human Services Alex Azar to explore ways to address surprise medical bills if Congress does not act by Jan. 1.

Stat News reporter Lev Facher noted that the order was merely a “plan to work with Congress” on the issue.

“I am not sure how/why these are executive orders,” New York Times health care reporter Margot Sanger-Katz tweeted. “They are requests for legislation.”

Along with the executive orders, Trump promised millions of seniors would receive $200 coupons toward the cost of prescription drugs. Trump claimed that the coupons would be sent to 33 million Medicare beneficiaries “in the coming weeks,” but the White House has not released any details about the president’s plan. It is unclear how it would actually be funded — or if it is even legal.

A White House official told Bloomberg News that the money would come from a “demonstration program Medicare uses to test new payment systems” and be offset by savings from price cuts Trump ordered for medications bought by the Medicare program. Stat News noted that the order has not been implemented, and the savings “do not currently exist.”

A top pharmaceutical lobby group told Bloomberg that it had already rejected the administration’s request to provide discount cards for Medicare patients, and drug companies are not aware of Trump’s plan for funding the program.

Stat News described the “plan,” which would come with a $6.6 billion price tag, as a “political ploy to curry favor with seniors.” Democratic strategist Adam Parkhomenko argued that it was a straight up “bribe” for seniors, a key Republican voting bloc.

Speaker of the House Nancy Pelosi, D-Calif., said Trump’s “bogus executive order” was not “worth the paper it’s signed on.”

“President Trump is lying to you about his ‘executive order,'” Senate Minority Leader Chuck Schumer, D-N.Y. added. “Protections for pre-existing conditions are the law. The threat to these protections is from President Trump and the Republicans suing to end them.”