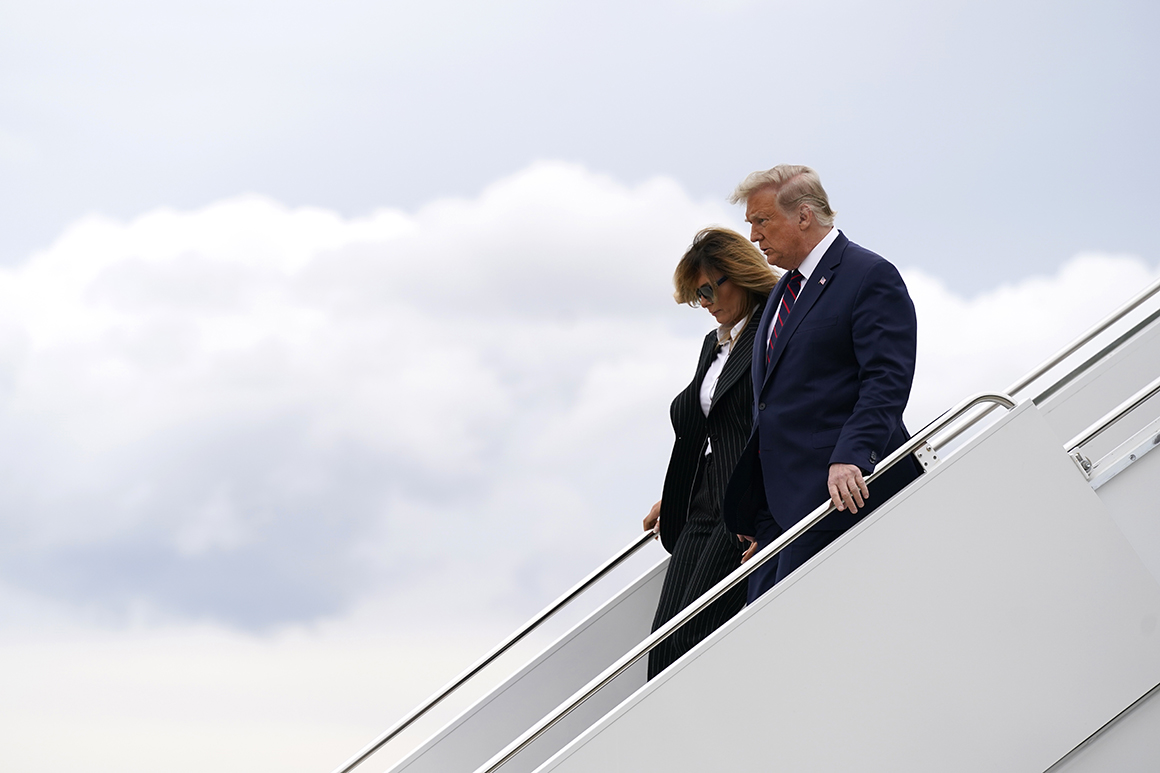 Trump’s physician, Sean Conley, said in a memo that the president and first lady were “both well“ and that Trump would continue to carry out his duties as president. Conley did not mention whether Trump was exhibiting any symptoms, but a person familiar with the situation said the president was not showing symptoms yet on Thursday. Still, Vice President Mike Pence may need to step in for some tasks if Trump is confined to the White House grounds, the person said.

The announcement threatens to transform the final month of a volatile campaign that Trump had long intended to frame around a message of success in defeating the virus — despite surging case counts in parts of the country, shuttered schools and businesses and widespread division about the seriousness of the threat. “I just want to say that the end of the pandemic is in sight, and next year will be one of the greatest years in the history of our country,” he said Thursday evening in a videotaped message to the annual Alfred E. Smith Memorial Foundation Dinner.

Trump’s announcement raised a slew of questions about whether his existing health conditions — his latest physician’s report recorded him as just over the line between overweight and obese — will put him at an increased risk of developing serious complications from the coronavirus. During his last physical, Trump’s doctor said the president “remains in very good health overall,” with a cholesterol level and blood pressure within normal ranges. He does, however, take medication for prior issues with high cholesterol.

Earlier this year Trump was closely monitored in case he developed an irregular heartbeat while he took a two-week course of hydroxychloroquine, an anti-malarial drug he touted early on, despite no conclusive evidence, as a possible treatment for the coronavirus.

Melania Trump, 50, also falls within an age range with high risk of complications. The virus can have wide-ranging impact on different people, even at advanced age, from relatively mild symptoms to devastating breathing problems.

“Karen and I send our love and prayers to our dear friends President @realDonaldTrump and @FLOTUS Melania Trump,” Pence tweeted early Friday. “We join millions across America praying for their full and swift recovery. God bless you President Trump & our wonderful First Lady Melania.”

Secretary of State Mike Pompeo, who is fourth in the presidential line of succession, told reporters Friday that he had tested negative for Covid-19 earlier that morning, and that the last time he was with the president was Sept. 15.

“We’re praying for the president and the first lady, that they’ll have a speedy recovery,” Pomepo, who was traveling on Friday to Croatia, said. He added that he had spoken to Pence’s office Friday morning and that “we’re taking this, obviously, very seriously.”

Trump made the announcement shortly after news broke that Hicks had tested positive. Hicks, who holds the senior title of counselor to the president, had traveled with Trump on Tuesday for his debate with Democratic challenger Joe Biden in Cleveland. She showed symptoms and got her test result early Thursday, but few people in the White House knew about it until later in the afternoon, according to the person familiar with the situation.

She was seen traveling Tuesday on Air Force One without a mask. She also traveled with the president during his rally in Minnesota on Wednesday.

Only a small group of White House officials were aware of Hicks’ positive diagnosis Thursday morning, and later in the day, news spread to more aides inside the West Wing.

Still, business at the White House continued. Press Secretary Kayleigh McEnany held a press briefing in the late morning, and in the afternoon the president flew to his private golf club in Bedminster, N.J., for a fundraising roundtable and reception with high-dollar donors. The president traveled with a smaller group of aides for the short trip, including John McEntee and deputy press secretary Judd Deere.

Minutes after Trump’s tweet, the White House canceled the president’s travel plans — he had been scheduled to attend a rally in Florida on Friday night. His other weekend events, including rallies in Wisconsin, which is struggling with a surge in cases, were also expected to be canceled.

It‘s unclear how long the president will be confined to the White House. The White House has required other officials who tested positive for the virus to have a week without symptoms and two negative test results before returning to work. The next presidential debate is set for Oct. 15.

The Centers for Disease Control and Prevention recommends anyone who has the coronavirus to self-isolate and “separate themselves from others by staying in a specific ‘sick room’ or area.” For symptomatic individuals, the agency recommends staying isolated until 10 days after symptoms first appear and at least a full day after a fever has died down and other symptoms are improving. For asymptomatic individuals, it recommends simply waiting until 10 days have passed since the date of the positive test.

Trump has been under fire for downplaying the virus in its earliest months and throughout the year. He told journalist Bob Woodward in February that he was “playing it down” even though it was possibly five times “more deadly” than the flu. Publicly, however, he compared Covid-19 to the flu and assured the public that “like a miracle, it will disappear.”

Trump has long faced criticism for his cavalier approach toward coronavirus precautions. His campaign rallies often feature large crowds of supporters tightly packed together, many without masks. He has also resumed indoor campaign events, even though health officials advise against crowded enclosed spaces. During his acceptance speech at the Republican National Convention in late August, a legion of supporters gathered on the White House grounds, many without masks.

Trump also has vacillated on his public support for basic coronavirus safety guidelines, such as wearing a mask when out in public and around other people. He’s railed against mask mandates that several cities have enforced but insists he wears masks “when needed.”

At this week’s debate, Trump even mocked Biden for wearing masks so often. “I don’t wear masks like him,” Trump said. “Every time you see him, he’s got a mask. He could be speaking 200 feet away from ‘em and he shows up with the biggest mask I’ve ever seen.”

Trump stood only feet away from Biden at the Tuesday debate — where multiple members of Trump’s entourage declined to wear masks, despite requests from the staff hosting the event. Former New Jersey Gov. Chris Christie, who was at the White House last weekend to help the president with debate prep, told ABC’s “Good Morning America” on Friday that he and others working Trump did not wear masks.