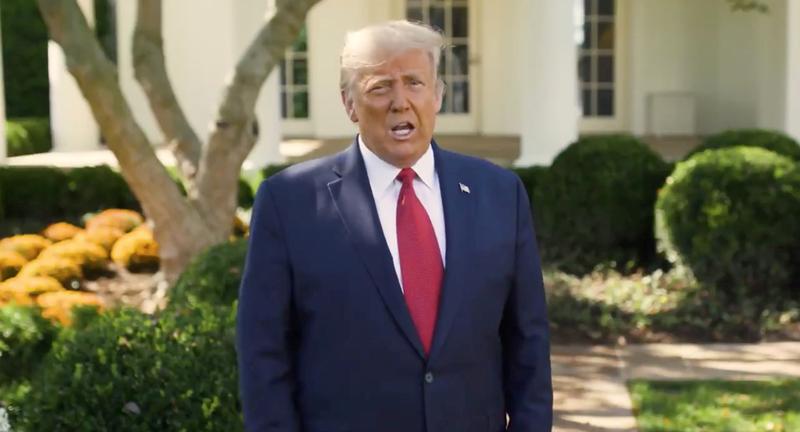 WASHINGTON (Reuters) – U.S. President Donald Trump will on Saturday hold his first public event since being diagnosed with COVID-19 more than a week ago, aiming to show he has beaten the virus and is ready to resume campaigning, although questions remain about his health.

Trump is expected to make remarks from a White House balcony to a crowd of hundreds on the lawn below. The White House called the event “a peaceful protest for law & order.”

The president revealed his positive coronavirus test on Oct. 2 and spent three nights in hospital before returning to the White House on Monday. He has not said whether he is still contagious, only that he is no longer showing symptoms of the virus that has killed more than 210,000 Americans.

A White House spokeswoman said on Friday that Trump will be tested for COVID-19 and will not go out in public if it is determined he can still spread the virus.

The White House did not preview the remarks that Trump will deliver on Saturday, but he campaigned on a law-and-order theme throughout a summer of protests for racial justice.

Trump’s efforts to portray himself as tough on crime have had little impact on his standing in national opinion polls, which show him trailing his Democratic challenger Joe Biden by double digits. But the gap between the two candidates is narrower in the battleground states that may determine who wins the White House.

Trump has said a Biden presidency would lead to lawlessness, while seeking to tie the former vice president to unrest sparked by the deaths of Black Americans while in police custody.

Biden has accused Trump of stoking violence with his rhetoric. The Democratic candidate has embraced calls from protesters for policing reforms but has denounced the rioting and looting that have disturbed some of the mostly peaceful protests across the country in recent months.

On Monday, Trump plans a campaign rally in central Florida, a must-win state for his hopes of a second term.

In an appearance on Fox News on Friday evening, Trump said he had been tested again for the virus but did not disclose the result. He also said he had stopped taking medications to combat COVID-19. “I feel really strong,” Trump said.

The White House has not released the results of Trump’s latest test, and has declined to say when he last tested negative.

Trump and his administration have faced criticism for their handling of the pandemic, as well as for a lax approach to mask-wearing and social distancing in the White House and – in recent days – confusing messages about how ill the president has been.

Biden sharply criticized Trump’s decision to resume campaigning. “Good luck. I wouldn’t show up unless you have a mask and can distance,” he told reporters in Paradise, Nevada.

A source familiar with the planning for Saturday’s White House event said attendees will all be expected to wear masks. People at the Florida rally will be given a temperature check, masks that they will be encouraged to wear, and access to hand sanitizer, the campaign said.

Biden will travel on Saturday to the city of Erie in northwestern Pennsylvania, a state that Trump narrowly took over Democrat Hillary Clinton in the 2016 election.

Former Democratic President Barack Obama won the county in the two elections beforehand and Biden, who was Obama’s vice president, has made the region a top priority.

A Reuters/Ipsos opinion poll released earlier this week showed Biden with a five-point edge over Trump in Pennsylvania. The poll also had Biden with a 10-point lead nationwide.