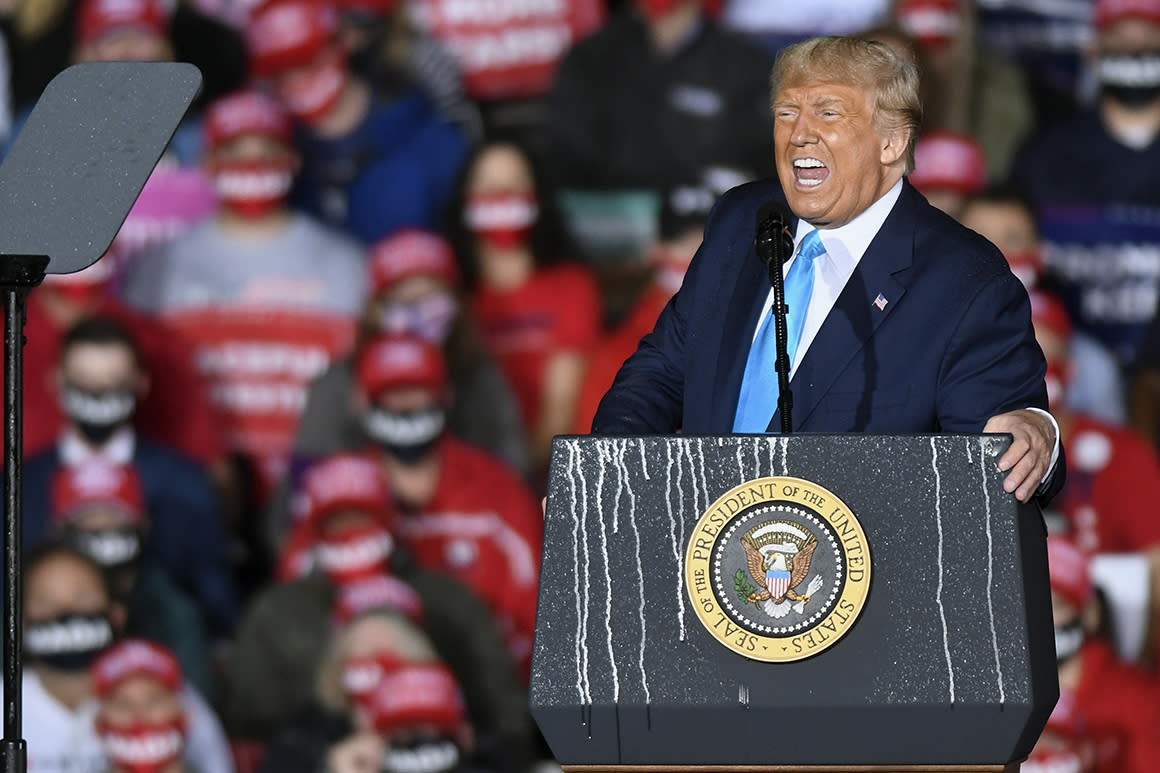 President Donald Trump’s coronavirus diagnosis set off a scramble to contact and trace thousands of people across at least half a dozen states, a public health crisis fueled by the White House’s downplaying simple pandemic containment tools.

The possibility that the president and his White House entourage were traveling superspreaders is a nightmare scenario for officials in Minnesota, Ohio, New Jersey and Pennsylvania — four states where Trump rallied, debated or fundraised in the past week.

The White House itself may have become a nexus of infection in the Washington, D.C., area and beyond, hosting events like last Saturday’s celebration of Supreme Court nominee Amy Coney Barrett. At many Trump events, masks were a rarity, social distancing minimal. Video of the Barrett event, for instance, shows people shaking hands, hugging and standing close together.

“They’re way behind the curve in trying to catch all the folks that the president has been around,” said Georges Benjamin, executive director of the American Public Health Association. “The fact that he’s been around so many people and that he doesn’t wear a mask, he could be a superspreader, we just don’t know yet.”

Trump on Friday evening was taken to Walter Reed National Military Medical Center, where he will spend the “next few days,” the White House said.

The White House is complying with CDC guidelines and has started contact tracing, with notifications and recommendations for people who may have had exposure to an infected person, spokesperson Judd Deere said.

The Secret Service, while staying mum on how many of its employees have tested positive for Covid-19 or are quarantining, said it’s following CDC protocols on testing and tracing. Anyone who tests positive is immediately isolated, a spokesperson said.

New Jersey Democratic Gov. Phil Murphy and his chief of staff spoke to the White House and the Republican National Committee — whose chair Ronna McDaniel has also been infected — about identifying and contacting people who were at a fundraiser at Trump’s Bedminster golf course on Thursday. It’s proven difficult, because some guests traveled from out of state and may have brought the virus home, seeding more outbreaks.

“We have to acknowledge there will be other communities, potentially other counties and perhaps even folks who came from other states,” Murphy said, urging attendees to self-quarantine and seek testing.

Contact tracing is further complicated by the inability to pin down when the president and his inner circle were infected, and when or how the chain of transmission began.

John Jenkins, president of the University of Notre Dame, tested positive for coronavirus after visiting the White House last weekend for Barrett’s nomination. That was six days before the president and first lady began isolating.

That night, the president held an outdoor rally in Pennsylvania where he promised to “crush the virus.” Thousands cheered, most without masks.

On Tuesday, Trump traveled to Ohio for the first presidential debate during which he mocked former Vice President Joe Biden for constantly wearing a face covering.

On Friday, the city of Cleveland announced 11 positive cases tied to pre-debate planning, with most coming from out-of-state residents. Republican Gov. Mike DeWine, who was not at the debate, said that he had spoken to the president aboard Air Force One on Tuesday before the event.

The governor and his wife, who are awaiting results from their own Covid test, wore masks and the president did not, DeWine said.

The president was in Minnesota on Wednesday for a rally where he again made representations that the virus was under control. It was on the trip back to Washington that senior aide Hope Hicks first felt ill, and was later confirmed to have contracted the virus. But Trump still visited his Bedminster club for Thursday’s high-dollar fundraiser.

Trump tweeted his diagnosis early Friday morning, setting off a mad dash to identify people who may have been exposed and to track down their contacts.

Minnesota health officials only learned of the president’s diagnosis from media reports, and as of Friday afternoon no one from the administration or campaign had reached out, according to state Director of Infectious Disease and Epidemiology Kris Ehresmann.

The state health department is urging residents who attended the rally in Duluth to get tested even if they don’t show symptoms, noting there was already a spike in cases in surrounding St. Louis County prior to the president’s event.

The Trump campaign has not turned over a list of attendees for the rally or a private fundraiser he held in Minneapolis, making contact tracing by the state health department impossible.

Two attendees of the exclusive Minneapolis fundraiser were only alerted of a potential Covid-19 threat by the White House around midday Friday, a source familiar with the event told POLITICO. They were instructed to see a doctor if they have symptoms.

And on Thursday the president’s son Eric held a separate outdoor rally in Minnesota’s Becker County. Neither Eric Trump, his siblings nor first lady Melania Trump, who was also diagnosed with Covid-19, wore masks at Tuesday’s debate.

Trump’s diagnosis has put on ice all his in-person campaign events. But Democratic nominee Joe Biden and his wife Jill, who have both tested negative, are pressing on with campaigning this weekend — a move that concerns some public health experts.

A single negative test does not guarantee an individual will not develop an infection in the future given the virus’ incubation period, said Eleanor Murray, an assistant professor of epidemiology at Boston University School of Public Health.

“If it’s possible the Bidens were exposed [at the debate] on Tuesday, I really am not happy to hear they are going about their regular business on Friday,” Murray said. “The only way that you can test out of quarantine is to get a positive test and switch into isolation,” she added.

Biden’s campaign pointed to the former vice president’s Friday afternoon comments from Grand Rapids, Mich., where he quoted CDC Director Robert Redfield on the efficacy of masks to stop transmission. An aide added that traveling campaign staff have all tested negative.

“Vice President Biden tested negative and was not in close contact with President Trump,” a Biden official said. “He also wore a mask at all times, except for when he was on stage. And we implement social distancing, mask wearing, and other best practices in all of our campaigning.”

Sam Sutton contributed to this report.