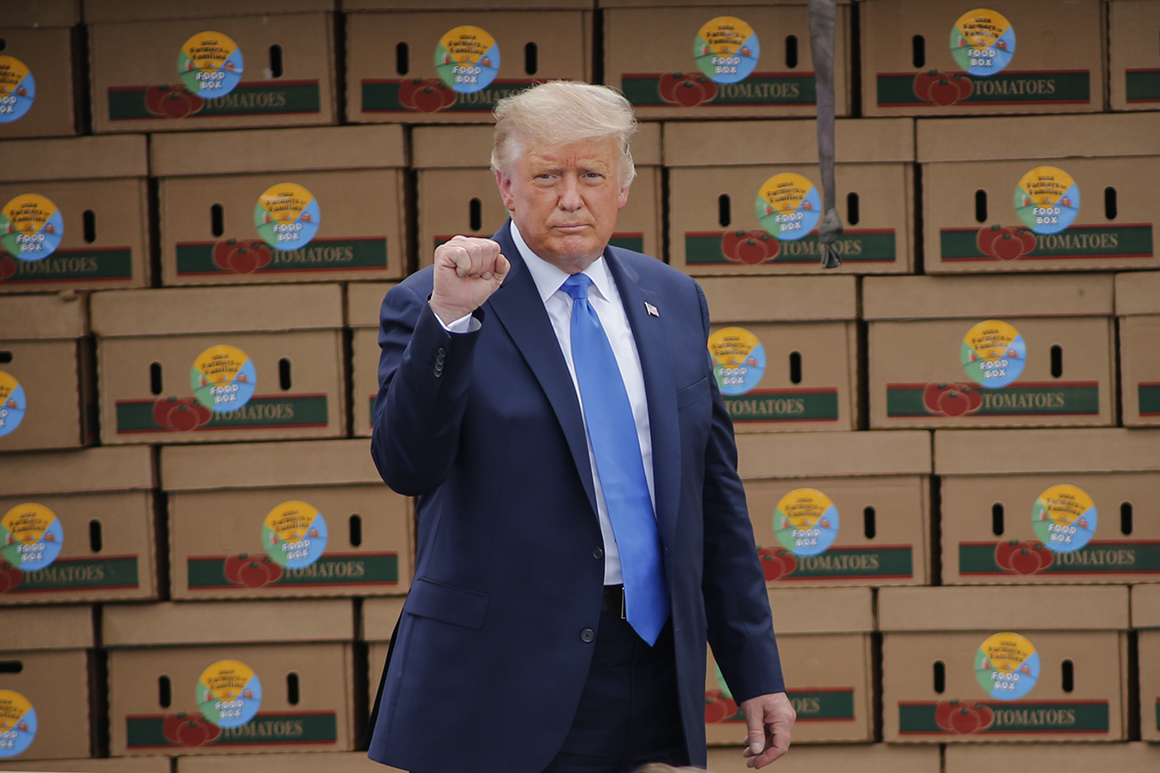 The letter comes in both English and Spanish on White House letterhead and features Trump’s bold signature: “As President, safeguarding the health and well-being of our citizens is one of my highest priorities,” it reads. “As part of our response to coronavirus, I prioritized sending nutritious food from our farmers to families in need throughout America.”

The move is the latest example of Trump using the levers of government and taxpayer dollars for self-promotion as he runs for re-election. In the early months of the crisis, the president enclosed letters with his signature to millions of Americans getting stimulus money stemming from a congressional aid package – and made sure his name was printed on the checks. His health department is now rushing to push out a $300 million taxpayer-funded ad campaign promoting the administration’s coronavirus response.

The administration has denied that these moves are political or improper, despite outcries from Democrats and questions from ethics groups.

“Politics has played zero role in the Farmers to Families food box program,” the Agriculture Department said in an emailed statement. “It is purely about helping farmers and distributors get food to Americans in need during this unprecedented time.”

The administration slowly started including letters from the president in USDA’s food boxes over the past few months. But last week the USDA began requiring the letters to be added to all boxes distributed by companies with government contracts, according to six people familiar with the program.

Fox News first reported in July that letters would be included in some boxes over the summer and credited Ivanka Trump with the idea. In response, Democratic lawmakers sent a letter to Agriculture Secretary Sonny Perdue complaining that the effort could be a violation of the Hatch Act, the federal law preventing executive branch employees from engaging in political activity. They asked the department to end the practice “immediately.”

The USDA responded by saying the letters don’t violate the Hatch Act and moved ahead anyway. This week, the White House posted a campaign-style video on Twitter touting the food boxes with remarks Trump made in North Carolina in August before a crowd of a few hundred people.

“It’s almost like an escalation,” Rep. Marcia Fudge, an Ohio Democrat who led the letter to Perdue, said in an interview. “Before they were optional. Now they are demanding that they go in every box.”

“This is supposed to be about helping hungry people,” said Fudge, who chairs a panel overseeing nutrition on the House Agriculture Committee, “It is one of the worst things I’ve seen in a long time.”

The new mandate has sent food banks and other nonprofits scrambling as they worry distributing the boxes with the letters could be misconstrued as election activity, according to interviews with nearly a dozen nonprofit and industry leaders.

“These guys should be handing out food and instead they’re talking to campaign attorneys because of these damn letters,” said Eric Kessler, founder of Arabella Advisors, a philanthropy consulting firm, and a longtime player in Democratic politics.”It’s a brazen attempt at vote buying targeted at the neediest.”

Food banks in several parts of the country said they have consulted lawyers to make sure they aren’t jeopardizing their nonprofit tax status, or violating any election laws.

In Ohio, food bank leaders sought legal counsel after a member of the National Guard who was helping hand out the food boxes raised questions about whether they could be inadvertently violating the Hatch Act.

In a legal memo shared with POLITICO, law firm Reminger determined that the letters do not violate the law because they don’t explicitly mention the election and the letter is not “directed towards the success or failure of a political party, candidate for political office or partisan political group.”

Some food banks have advised the food pantries and nonprofits in their network that they can open the boxes one by one and take out the letter from the president if they want to and have the staff to do so.

“We are a nonpartisan organization,” said Greg Trotter, a spokesman for the Greater Chicago Food Depository. “While the content of the letter is not overtly political, we think it’s inappropriate to include a letter from any political candidate just weeks from an election.”

In Oregon, a major food bank recently decided to stop participating in the program, in part because of the letters. The CEO of the organization, Susannah Morgan, wrote in a statement that “there are real questions as to whether food assistance organizations can ethically distribute such a message with an election looming in mere weeks.”

The Agriculture Department did not respond to questions about why the letters were previously not required, but now are.

In response to POLITICO’s questions, a spokesperson for USDA said Anthony Fauci, the top infectious disease official at the National Institutes of Health, supports the letters as a messaging tool.

“In addition to benefiting from fresh produce, dairy and meat products, Americans in need also are receiving essential information about how to protect themselves and others from COVID-19. These measures include avoiding crowds, maintaining physical distance (6 feet), covering your mouth and nose with a cloth face cover when around others, and washing your hands often,” Fauci said, in a statement provided by USDA.

The single-page letter included in the boxes, however, is less specific, telling people to wash their hands, protect the elderly and vulnerable, and stay home if they feel sick. The letter only says to “consider” wearing a face covering in public, though the Centers for Disease Control and Prevention explicitly recommends doing so.

The USDA also shared a statement from Ivanka Trump, who has been a public ambassador for the program.

On the south side of Chicago, in a predominantly Black neighborhood that has been hard hit by Covid-19, the Greater Auburn-Gresham Development Corporation has been handing out USDA food boxes every week since mid-May, when the program began. This week was the first time the president’s letters started showing up in the boxes, which are handed out in the parking lot of a Save-A-Lot grocery store that shut down in February, just weeks before coronavirus began wreaking havoc on the economy, said Carlos Nelson, the CEO of the nonprofit.

“It’s really shocking,” Nelson said, noting that the letters put his organization in an uncomfortable position because the group is required to remain apolitical to maintain its nonprofit tax status. “It seems like it’s being politicized.”

On Tuesday, during their weekly distribution event, one long-time volunteer walked off and refused to participate once she realized the packages contained letters from Trump, expressing worry that people may think the boxes were essentially trying to sway votes, Nelson said. Others opened up the boxes and began removing the letters before handing them out to individuals who arrived at the event on foot, though the vast majority were not removed before being handed out.

Some people receiving the boxes pitched the letters out their car windows, Nelson said, leaving them on the ground. “Thankfully we’ve got a litter abatement team here,” he said.