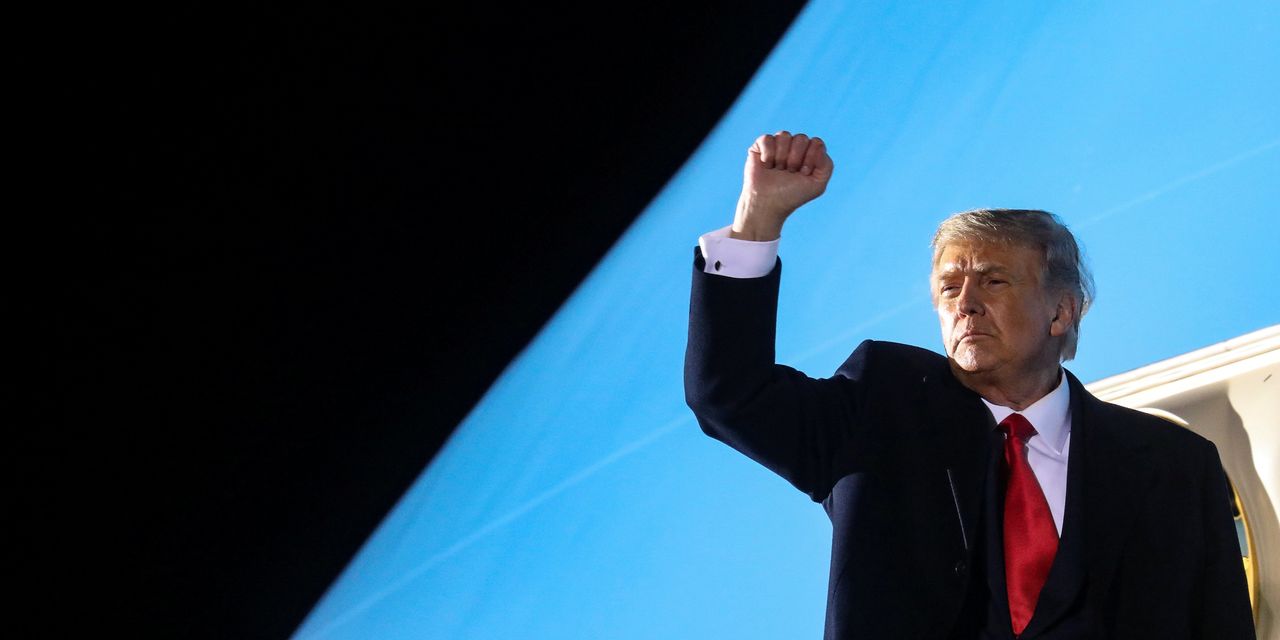 President Trump, who has tested positive for Covid-19, took an experimental Covid-19 drug that has shown promise reducing virus levels in early-stage patients but hasn’t finished being tested or been cleared for use by regulators.

As a precautionary measure, the president received an eight-gram dose of

Regeneron said that Mr. Trump received the drug under a compassionate-use request, which allows unapproved medicines to be used in patients with serious diseases who don’t have other treatment options.

The company describes its drug as providing a substitute immune response for patients who haven’t mounted their own yet and who have high virus levels in lab tests.

“Older people are among those who have trouble mounting an immune response, which would mean that they have less ability to fight the virus,” said George D. Yancopoulos, Regeneron president and chief scientific officer. These patients “should benefit the most from getting an immune response from the outside,” he said.

White House officials said Mr. Trump, who is 74 years old, was experiencing mild symptoms after his diagnosis. The infusion of the Regeneron drug was among a number of precautions being taken with the president, including his transport to Walter Reed National Military Medical Center where he will work from the presidential offices there the next few days.

Most people who contract the virus experience mild symptoms and recover. Yet Mr. Trump is at a higher risk of facing severe illness than younger people. The risk for a severe case of Covid-19 increases with age, along with factors including whether a person has other medical conditions like cancer, diabetes or obesity, studies show.

Mr. Trump weighed 244 pounds as of his last physical, made public in June, and stood 6 feet, 3 inches tall, which meant he narrowly met the Centers for Disease Control and Prevention’s definition of obesity.

The obesity rate among adults in the U.S. is 42.4%, according to the CDC. Obesity may triple the risk that a patient is hospitalized due to Covid-19, and is linked to patients having a weaker immune system, the agency said.

The president’s age, gender and weight are each “a factor that is more predictive of patients having a more difficult course,” said David Hirschwerk, an infectious disease specialist at Northwell Health in New York.

Yet most people don’t end up in the hospital as a result of their infection and recover at home, with doctors recommending rest and fluids if patients become dehydrated.

A few drugs have been authorized for treatment, including the antiviral remdesivir and convalescent plasma. The steroid dexamethasone has also been shown in studies to help. Yet the drugs are targeted for hospitalized patients, though doctors could use them on less serious cases.

Monoclonal antibodies have shown promising preliminary results in treating patients earlier in the course of their disease and are administered with a single infusion. The drugs mimic the natural antibodies the immune system makes to fight off viruses.

The most advanced of these agents are under development by

& Co. and Regeneron. Both treatments are still in clinical trials and haven’t been cleared by the U.S. Food and Drug Administration.

Patients taking Regeneron’s monoclonal antibody cleared more of the virus from their systems than those taking placebos in an early-stage trial, but the company said earlier this week that the greatest benefit was seen in patients who hadn’t yet mounted an effective immune response of their own.

“The more recent the infection, the more likely it is that you haven’t mounted an immune response, which would put you in the ideal category of potentially being helped” by Regeneron’s drug, the company’s Dr. Yancopoulos said.

Aside from getting the antibody drug, Mr. Trump has been taking zinc, vitamin D, famotidine, melatonin and a daily aspirin, according to the White House.

Doctors may give the vitamins and minerals to Covid-19 patients because they are relatively safe and might give the immune system a boost, but there is no definitive evidence that they actually provide benefit to prevent or treat Covid-19, doctors said.

“A lot of this is theoretical,” said Paul Marik, chief of the division of pulmonary and critical-care medicine at Eastern Virginia Medical School, who said he gives to his patients a regimen similar to what Mr. Trump has been taking. “We don’t have definitive data that it works, but it makes good sense and it’s safe.”

A paper published last month in the journal PLOS ONE found a higher rate of coronavirus cases in people who were deficient in vitamin D than in people who had normal levels of vitamin D, though scientists say more research is needed.

Aspirin could help reduce the risk of clotting, which Covid-19 patients are more prone to, doctors said.

For those who do experience more severe disease, their symptoms often start out mild and worsen over time, typically within a week or so, infectious-disease experts say.

“The critical week is Oct. 7 or 8 to Oct. 15,” said Daniel Griffin, chief of infectious-diseases at ProHealth Care New York.

The president’s personal circumstances correlate with better outcomes battling the virus, Dr. Griffin says. He is white, has access to high-quality care and received a relatively early diagnosis.

“Being Caucasian puts him at lower risk than if he was a person of color,” said Dr. Griffin. “And people who are diagnosed early, followed closely and have access to the right therapeutics clearly do better than patients without those advantages.”

Sleep is an important part of immune system health, doctors say. Mr. Trump’s infection follows weeks of campaigning. Earlier this week he traveled to a Minnesota rally and the first presidential debate in Ohio. He also attended a fundraiser Thursday at his golf club in Bedminster, N.J.

Doctors monitoring Covid-19 patients recovering at home say they should check their temperature and oxygen levels using a pulse oximeter daily in addition to reporting any new symptoms.

Vice President Mike Pence and Democratic presidential nominee Joe Biden both tested negative for the virus Friday, but because it takes two days to two weeks for the virus to incubate and become detectable, they could still test positive within the next week or so.

“It’s hard to ignore the fact that Joe Biden was standing 20 feet away from him without a mask and in an indoor environment,” Dr. Hirschwerk added.