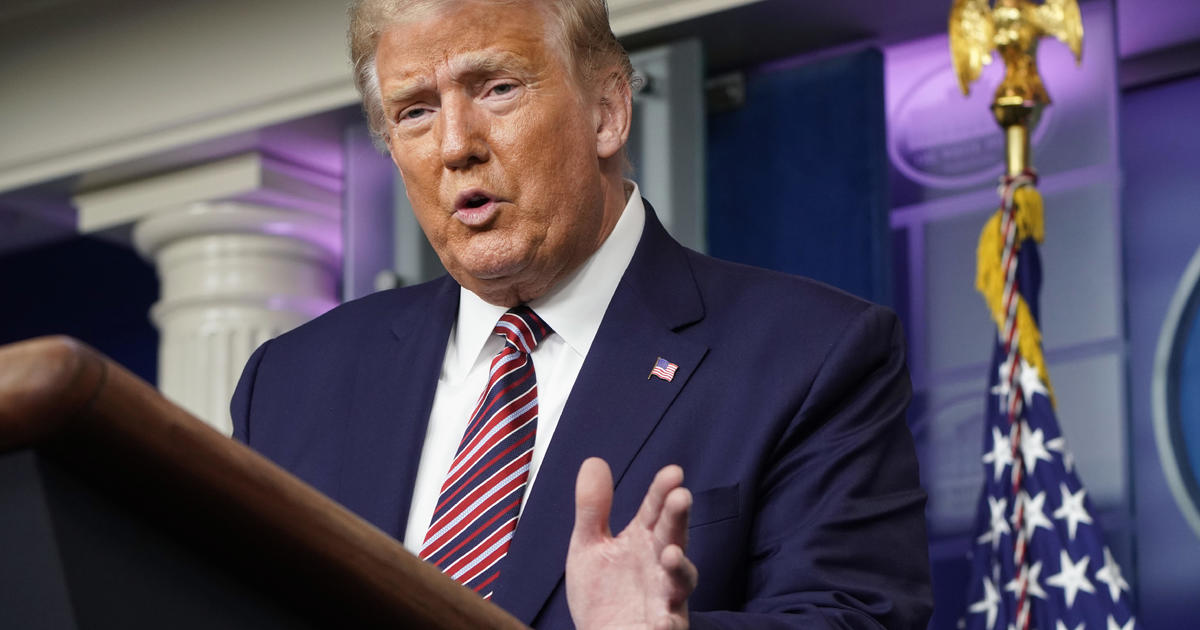 Washington — President Trump announced the federal government is sending 150 million rapid care tests to governors to distribute as they deem fit. Governors are encouraged to use them to screen at schools and in high-risk settings, the president said in a Rose Garden event.

But the president had already announced that would be happening in August, before accepting the nomination at the Republican National Convention.

The update on the nation’s coronavirus testing strategy comes one day after a bombshell report from the New York Times provided an in-depth look at the president’s finances and revealed that he only paid $750 in federal income taxes in 2017.

So far, the country has run 111 million tests, according to coronavirus testing czar Admiral Brett Giroir. Giroir demonstrated a self-swab test from the White House Rose Garden, in an effort to show how simple the test can be.

“There’s never been anything like this,” Mr. Trump said of the nation’s testing.

The total number of global deaths from the coronavirus nears 1 million. In the United States, there have been more than 7.1 million confirmed cases and 204,000 deaths, according to Johns Hopkins University.

Mr. Trump said the total number of cases is not the best metric of success, noting that hospitalizations have improved.

Four vaccines are now in the final stages of trials, the president said, insisting his administration will begin administering the vaccine as soon as it’s ready. Mr. Trump claimed 100 million doses will be available by the end of the year.

“We’re all set to go, we’re all ready and logistically we have the military all lined up,” Mr. Trump said.

While the nation continues to grapple with the coronavirus crisis, public health officials are warning the pandemic could worsen in the coming winter months and heading into flu season. Dr. Anthony Fauci, the director of the National Institute of Allergy and Infectious Diseases, told a panel this month that “we need to hunker down and get through this fall and winter because it’s not going to be easy.”

Mr. Trump, though, told reporters he believes the U.S. is “rounding the final turn” and has touted the progress made on the development of a coronavirus vaccine, which he has repeatedly suggested would be ready before the November election.

The Trump administration’s top public health officials have rebuffed the rosy timeline for a vaccine, predicting instead that one will not be available for the general population until mid-2021.

The president’s remarks on the coronavirus testing strategy — to be delivered one day before the first presidential debate — following the publication of a report from the New York Times that examined years of his tax information.

According to the report, which Mr. Trump dismissed as “fake news” on Sunday, the president paid just $750 in federal income taxes in 2016 and 2017. He paid no income taxes in 10 of the 15 years through 2015, the Times reported. The documents obtained by the Times also show he has $421 million in debt coming due.