GIFFORD — It’s been a year since the Gifford Health Center opened its doors under the management of Treasure Coast Community Health, and reviews of the health care facility have been overwhelmingly positive.

“It’s really beginning to gel,” said Freddie Woolfork, who chairs the Gifford Health Council, a group of community leaders who led efforts to establish the full-service center that now sees both pediatric and adult patients.

The county health department had been providing services at the center since 2003,  but in recent years, had only serviced pediatric patients.

When the health department announced it was pulling out of the Gifford Health Center, it threw the Gifford community into turmoil, with many wondering if they would be able to get medical care without driving to Vero Beach.

“We knew if we were going to get this done, a lot of people had to leave their egos at the door,” Woolfork said. “And little by little, we found out we could actually work together and communicate with one another to make health care in Gifford a reality.”

Tracey Zudans, a trustee for the Indian River County Hospital District, led the district’s initiative to establish a full-time, full-service health center in Gifford and said she is pleased with what she’s seen over the past year.

“For a long time, the Gifford community wanted complete medical services for adults and children to be available at the center,” said Zudans.  “As a hospital district board, we took a long, hard look at who we thought could best provide those services and we chose Treasure Coast Community Health.”

Over the past year, Zudans, Woolfork, Vicki Soule, who CEO Of Treasure Coast Community Health, and other community partners have met regularly to discuss services and ways to improve medical care at the center.

“What Treasure Coast Community Health has done is ask what the community needs and wants from their health care provider,” said Zudans. “If it’s a service they currently are not offering, they find a way to make it happen.”

One of those services in the planning stages is a full-service pharmacy where patients at the Gifford Health Center can fill prescriptions at a much-reduced cost. Soule hopes to have the pharmacy up and running in January and believes it will be a big step forward for the community.

In a typical week, the Gifford Health Center sees between 200 and 250 patients, with the highest number of patients seeking care for hypertension, health officials said.

The center also offers behavioral health services to the community, providing treatment for depression and anxiety most frequently.

Last fall, Soule said she and her team spent hours in the community, meeting with residents and explaining the types of medical care they could receive in the Gifford community. They set up tents at community events, sponsored health fairs and hired members of the Gifford community to work at the health center in visible positions.

“Anytime there is a change, people wonder how it is going to affect them personally,” said Soule. “There was a huge concern among people that they wouldn’t be able to afford the cost of care or that we would ask them to pay more than they could afford, and that just hasn’t been the case. While we do expect a little skin in the game, we work with every patient no matter what their financial situation might be.” 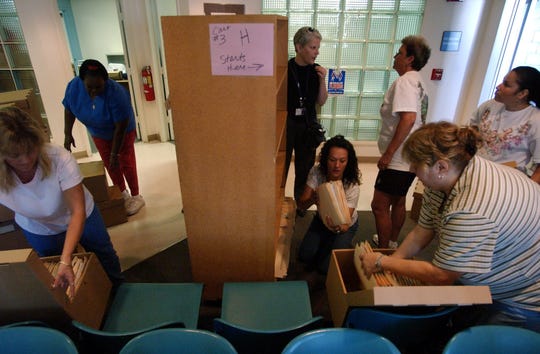 Employees from the Gifford Health Center pack up medical records from an overstuffed shelf so they can be moved into the new building across the street in October 2003, in Gifford. The new facility, located west of the Gifford Middle School on 28th Court, opened for patients in 2003 at the current location. (Photo: ALEX BOERNER/TCPALM)

The Gifford Health Center shares space with the VNA of the Treasure Coast, We Care and Healthy Start of Indian River County in a building that is owned by the Hospital District. Having those strong community partners remain in the same building has helped solidify the importance of quality health care for Gifford.

“The Gifford Health Center is such a valuable asset for the community,” said Zudans.  “Even just one year out, the trust between people and their health care provider is a strong one and I feel honored to have played a small role.”

If you subscribe to TCPalm, thank you. If not, please consider subscribing for more community news.