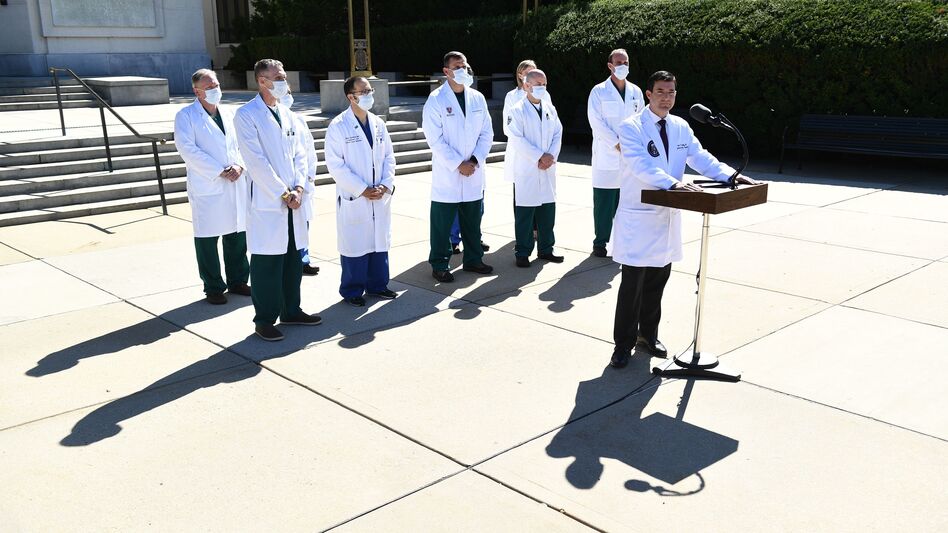 Eds note: President Trump’s doctors gave a briefing Saturday morning outside Walter Reed National Military Medical Center. In a statement later, Dr. Sean Conley said he misspoke during his news conference. He said he incorrectly used 72 hours instead of “day three” for the president’s diagnosis. He also said a reference to 48 hours ago should have been “day two” for administering Regeneron.

A transcript of the briefing follows:

CONLEY: Good morning everyone. Dr. Sean Conley, physician to the president. This morning, I’d like to start by first sharing that the president and first family, first lady are extremely grateful for the enormous outpouring of support and prayers that the whole world and country have been providing.

As reported yesterday, in consultation with this group, I recommended we bring the president up to Walter Reed as a precautionary measure to provide state-of-the-art monitoring and any care that he may need. Just 72 hours into the diagnosis now, the first week of Covid, and in particular days seven to 10, are the most critical in determining the likely course of this illness.

At this time, the team and I are extremely happy with the progress the president has made. Thursday, he had a mild cough and some nasal congestion and fatigue, all of which are now resolving and improving at this time. I’d like to bring up Dr. Dooley to discuss some of the specifics on the president’s care.

DOOLEY: Thank you and good afternoon. I’m Dr. Sean Dooley, as Dr. Conley mentioned. I’ll start off by mentioning what an incredible– how incredibly proud I am of our medical team assembled behind me and the honor it has been to care for the president over these last 24 hours here at Walter Reed.

He’s receiving outstanding multidisciplinary care, the state of the science for coronavirus infection. We are monitoring him very closely for any evidence of complications from either the coronavirus illness or the therapies that we are prescribing to make him better.

We monitor his cardiac function, his kidney function, his liver function. All of those are normal. And the president this morning is not on oxygen, not having difficulty breathing or walking around the White House medical unit upstairs. He’s in exceptionally good spirits. And in fact, as we were completing our multidisciplinary rounds this morning, the quote he left us with was “I feel like I could walk out of here today.” And that was a very encouraging comment from the president.

But before, I’ll go ahead and introduce Dr. Garibaldi, who will talk about some of our therapeutics and the plan of care for today. Thank you.

GARIBALDI: Thank you, Dr. Dooley. And I’d like to echo the sentiment from the entire team what an honor and a privilege it is to be part of this multidisciplinary unit to care for the president.

About 48 hours ago, the president received a special antibody therapy directed against the coronavirus. And we’re working very closely with the company to monitor him in terms of that outcome. Yesterday evening, he received his first dose of IV Remdesivir and our plan is to continue a five day treatment course for Remdesivir. And the big plan for today, since he’s in such great spirits and doing well, is to encourage him to eat, to drink, to stay hydrated, to be up out of bed and to be working and doing the things that he needs to do to get well. And I’ll refer to Dr. Conley for any questions.

CONLEY: Thanks, Brian. It’s important to note the president’s been fever free for over 24 hours. We remain cautiously optimistic, but he’s doing great with that. Oh, one other note. It should be clear that he’s got plenty of work to get done from the chief of staff and he’s doing it. With that, if there’s a couple of questions about the president’s health in the last couple of days.

REPORTER: Can you tell us the president’s oxygen saturation level please?

CONLEY: Yeah. So the last saturation that we had up walking around, he was about 96%.

REPORTER: And he is receiving no, he has not received any supplemental oxygen?

REPORTER: He’s not received any at all?

CONLEY: He’s he’s not needed any, uh, this morning, today at all. That’s right. No he’s…

REPORTER: Do you have an estimated date when he might be discharged?

CONLEY: Well, I don’t want to put a hard date on that. He’s doing so well. But with a known course of the illness, day seven to 10, we get really concerned about the inflammatory phase, phase two. Given that we provided some of these advanced therapies so early on the course a little bit earlier than the most of the patients we know and follow, it’s hard to tell where he is on that course. And so every day we’re evaluating does he need to be here? What does he need and where is he going?

REPORTER: What is the probability that he will need supplemental oxygen going forward?

CONLEY: I don’t want to put a percentage on that. But, but right now, all indicators are that that he’ll remain off of oxygen going forward.

REPORTER: In terms of like blood clots, pneumonia, bacterial infection, what do you see as the risk on that front?

CONLEY: Well, we know that all of them are risks associated with this condition. He is receiving all of the standard of care and beyond per routine international Covid protocols. So we’re monitoring for all that. But at the moment, there’s no cause for concern.

REPORTER: You said he’s fever free now. What was his fever when he had one, sir?

CONLEY: I’d rather not give any specific numbers, but but he did have a fever Thursday into Friday. And since Friday morning, he’s had none.

REPORTER: OK, what was the date…

REPORTER: on top of the other antibodies

REPORTER: Why Remdesivir on top of the other antibodies?

CONLEY: So Remdesivir works a little bit differently than the antibodies. We’re maximizing all aspects of his care, attacking this virus, you know, multipronged approach. As the president, I don’t want to hold anything back. If there was any possibility that it would add value to his care and expedite his return, I wanted to take it and the team agreed. And it’s what we proceeded.

REPORTER: Doctor, what was the date of the president’s last negative test?

CONLEY: I’m not going to get into all the testing going back, but but he and all the staff routine, routinely are tested. And so,

REPORTER: Doctor, what was the PPE the protocol for President Trump receiving visitors and doctors?

CONLEY: It’s the same as any hospital has.

We have an area that that’s clean that you you put your equipment on. And then beyond that, everybody is fully gowned up masks, gloves. We’re protecting ourselves and him.

REPORTER: [inaudible] Have you done a screen, has there been any sign of lung damage whatsoever?

REPORTER: Has there been any sign of damage there?

CONLEY: I’m not going to go into specifics of what the findings [inaudible]

REPORTER: Can we please [inaudible] one thing. Has he ever been on supplemental oxygen?

CONLEY: He, right now he is not on oxygen.

REPORTER: I understand, I know you keep saying right now, but should we read into the fact that he had been previously?

CONLEY: Yesterday and today he was not on oxygen

REPORTER: So he has not been on it during this, his Covid treatment?

REPORTER: Has hydroxychloroquine been considered as a viable treatment option for the president?

CONLEY: We discussed it. He asked about it. He’s not on it now.

REPORTER: And Doctor, what symptoms, has he also experienced difficulty breathing?

CONLEY: No, no he has not. Never did. He had a little cough, he had the fever. More than anything he’s felt run down.

REPORTER: Who is handling contact tracing — is that the White House or CDC?

CONLEY: The White House, uh, the White House medical unit, in conjunction with the collaboration with CDC and local state health departments, are conducting all contact tracing per CDC guidelines.

REPORTER: When was the positive diagnosis made? You said 72 hours. That would present that Wednesday.

CONLEY: Yeah. So Thursday afternoon following, following the news of a close contact is when we we repeated testing and given kind of clinical indications I had a little bit more concern. And that’s when late at night we got the PCR confirmation that that he was.

REPORTER: Is there any clarity on how he became infected?

CONLEY: I’m not going to go into that as far as his care is irrelevant.

REPORTER: Or when he became infected?

CONLEY: Yeah, we’re going to go into that. We’re just tracking, his clinical course and providing the best care we can.

REPORTER: Will President Trump have to stay at Walter Reed to get five-day Remdesivir treatment?

CONLEY: We discussed that. Right now, if he needs all five days, that will likely be the course. But again, every day we’re reviewing with the team his needs for being here. And and as soon as he gets to the point where it’s not a requirement, he may still need some care but if we can provide that downtown at the house, then we will transition at that point. As long as it’s safe and appropriate, and the team agrees.

REPORTER: In addition to his weight, does he have any other risk factors that make him more at risk for sort of a severe case?

CONLEY: Well, not particularly. I mean, he’s he’s 74, he’s male, and he is slightly overweight. Other than that, he’s very healthy. Cholesterol is great. His blood pressure is great. It’s not on medications for that. He’s up and active. You saw his activity, the days leading up to long hours and everything else he’s he’s able to handle.

REPORTER: Can you provide other vitals like heart rate, blood pressure and temperature?

His blood pressure has remained where it’s where it’s historically been during our physicals, you know, 110 to 120 systolic. He’s great. It’s never budged. I’ve had no concerns there.

REPORTER: So why was the decision made to transfer him here?

CONLEY: Because he’s the president of the United States.

REPORTER: And [inaudible] if doctors have found that the prone position is helpful for Covid, has he been in that at all?

CONLEY: No, we actually — he asked about that. He did, Thursday into Friday. He’s been briefed by the task force and all the scientists for months. And he brought that up, you know, as we were discussing his cough and the time his oxygen levels were O.K., we didn’t feel like we need to do it. We came up here and discussed it with the team as well. We consider all options, but he’s not needed any of that.

REPORTER: Why wasn’t the first lady admitted as well?

CONLEY: The first lady is doing great. Thanks for asking. She has no indication for hospitalization, advanced therapy. She’s convalescing at home. Thank you.

REPORTER: I will try to pin you down one more time. I know you said there’s no oxygen yesterday, today.

REPORTER: But did he receive any on Thursday.

CONLEY: No, no Thursday.

REPOTER: Ok, so no Thursday, no Friday no Saturday. That’s fine. That was why we were confused.

CONLEY: So Thursday, no oxygen, none at this moment. Yeah, and yesterday with the team while we were all here he was not on oxygen.

REPORTER: So has the president actually been admitted as a patient to this hospital?

CONLEY: The president is a patient at Walter Reed National Military Medical Center.

REPORTER: Is he on steroids?