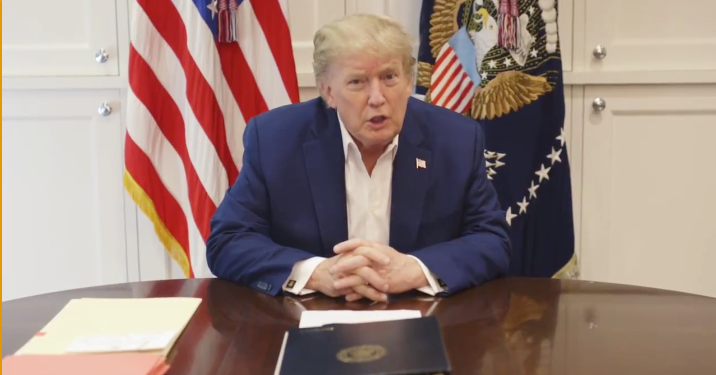 On Saturday, President Trump released a four-minute video from Walter Reed National Military Medical Center in Bethesda, Md., where he is receiving inpatient care for the coronavirus, to say that he is “starting to feel good.”

Wearing a blue jacket, cuff links and an American flag pin but no necktie, the president looked much paler than he did during his debate in Cleveland on Tuesday with former Vice President Joseph R. Biden Jr. Thanking the staff at Walter Reed, Trump said that he “wasn’t feeling so well” when he arrived at the hospital on Friday, but that he felt “much better now.”

He congratulated himself for his job performance and said, “I think I’ll be back soon.”

The video, released Saturday evening, contrasted with what Mark Meadows, the president’s chief of staff, had told reporters earlier in the day outside the hospital. “The president’s vitals over the last 24 hours were very concerning,” Mr. Meadows said. “And the next 48 hours will be critical in terms of his care.”

For a president who often serves as his own spokesman, the video’s release may have been a way to reclaim the narrative from doctors who have offered conflicting reports of the president’s health, and from statements made by his own White House staff.

According to people close to the president, he was furious about Mr. Meadows’s comments. With only a month remaining until the Nov. 3 election, there is precious little time to recast the president’s current health problems in a positive light before the nation decides whether to give him a second term in office. Mr. Trump has canceled previously scheduled public appearances, and it is unclear whether he will be able to rejoin the campaign trail.

Soon, however, it became clear that Mr. Meadows was the source of the information once a video posted online captured him approaching the pool reporters outside Walter Reed after the doctors’ televised briefing and asking to speak off the record.

Mr. Meadows later tried to walk back his comments. “The president is doing very well,” he told Reuters. “He is up and about and asking for documents to review.” He called into Fox News on Saturday night, knowing the president was most likely watching, and praised his “unbelievable courage” and “unbelievable improvement.” But he also confirmed that Mr. Trump’s condition on Friday was worse than originally described. “Yesterday morning we were real concerned with that,” Mr. Meadows said. “He had a fever and his blood oxygen level had dropped rapidly.”

Despite the back-and-forth tussle over messaging, both Mr. Meadows and Mr. Trump agreed on a central point: The president’s potential for recovery is uncertain at the moment.

“You don’t know over the next period of a few days, I guess that’s the real test,” Mr. Trump said.