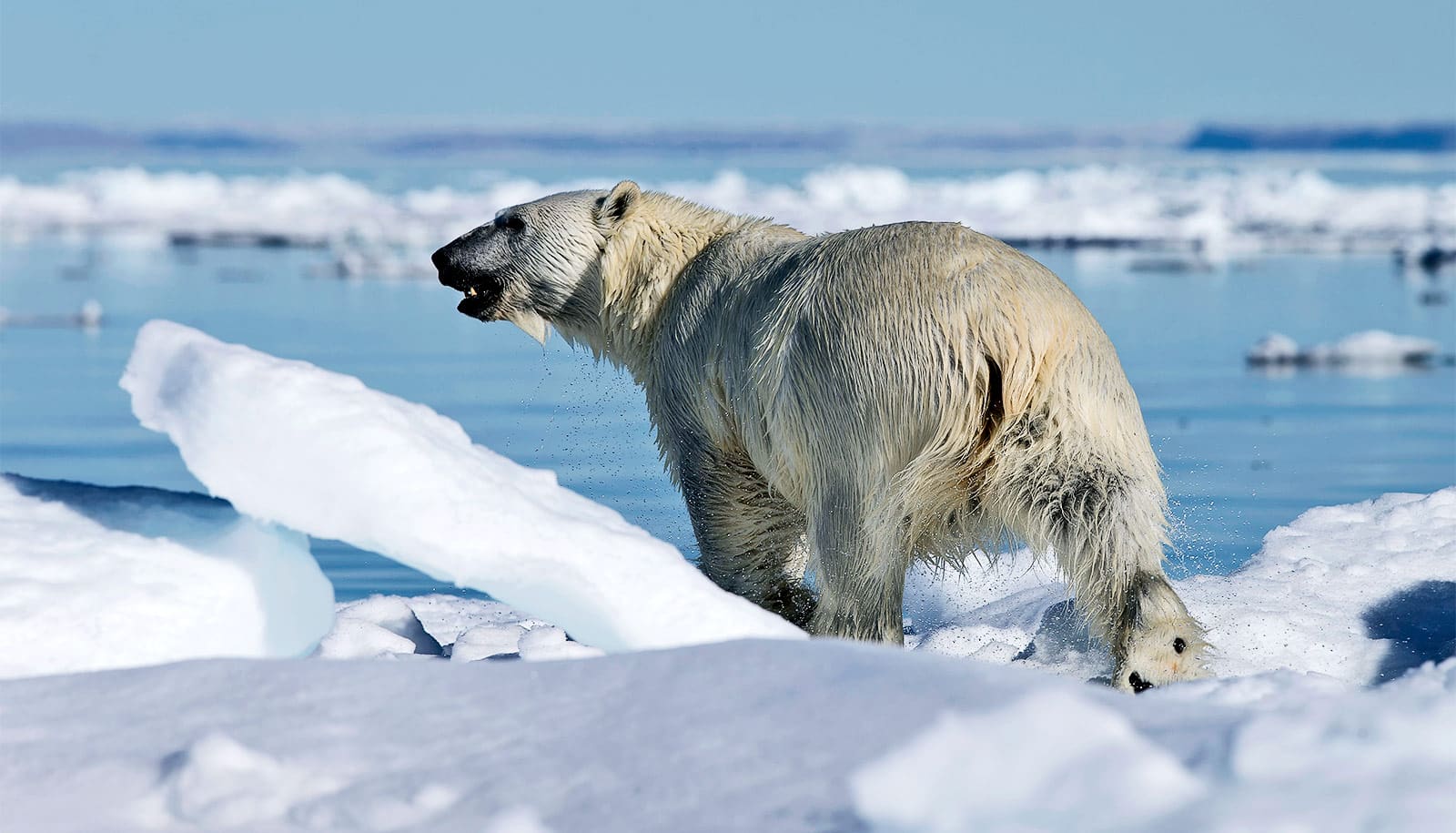 You are free to share this article under the Attribution 4.0 International license.

Despite warming conditions, a small subpopulation of polar bears that live far above the Arctic Circle are, on average, healthier than they were in the 1990s, a new study shows.

The roughly 300 to 350 polar bears that live on what used to be thick, multiyear sea ice in Kane Basin, a frigid channel between Canada’s Ellesmere Island and Greenland, make up about 1-2% of the world’s polar bears.

The study in Global Change Biology finds the bears are healthier as conditions warm because thinning and shrinking multiyear sea ice is allowing more sunlight to reach the ocean surface, which makes the system more ecologically productive.

“We find that a small number of the world’s polar bears that live in multiyear ice regions are temporarily benefiting from climate change,” says lead author Kristin Laidre, a polar scientist at the University of Washington Applied Physics Laboratory’s Polar Science Center.

If greenhouse gases continue to build up in the atmosphere and the climate keeps warming, within decades these polar bears will likely face the same fate as their southern neighbors already suffering from declining sea ice.

“The duration of these benefits is unknown. Under unmitigated climate change, we expect the Kane Basin bears to run into the same situation as polar bears in the south—it’s just going to happen later,” Laidre says. “They’ll be one of the last subpopulations that will be negatively affected by climate change.”

All of the world’s 19 polar bear subpopulations, including Kane Basin, are experiencing a shorter on-ice hunting season, according to a 2016 study Laidre led. This makes it hard for the animals, which can weigh more than 1,200 pounds as adults, meet their nutritional needs. Polar bears venture out on sea ice to catch seals. In summer when the sea ice melts, the polar bears fast on land.

Laidre led a recent study showing that in the Baffin Bay polar bear subpopulation, which includes about 2,800 bears living just south of Kane Basin, adult females are thinner and are having fewer cubs as the summer open-water season—when they must fast on land—grows longer.

The new paper looked at Kane Basin bears using satellite tracking data and direct physical measurements to compare from 1993 to 1997 with a more recent period, from 2012 to 2016. The body condition, or fatness, improved for all ages of males and females. The average number of cubs per litter, another measure of the animals’ overall health, was unchanged.

“They now have to move over larger areas,” Laidre says. “The region is transitioning into this annual sea ice that is more productive but also more dynamic and broken up.”

Observations show a profound shift in the sea ice in Kane Basin between the two study periods. In the 1990s, about half the area was covered in multiyear ice in the peak of summer, while in the 2010s the region was almost completely annual ice, which melts to open water in summer.

“Two decades ago, scientists hypothesized that climate change could temporarily benefit polar bears in multiyear ice regions over the short term, and our observations support that,” Laidre says.

The subpopulation on the other side of Ellesmere Island, in Canada’s Norwegian Bay, could be in a similar situation, she says, though no data exist for those animals.

If conditions continue to warm these northernmost polar bears will likely face the same fate as their southern neighbors. Kane Basin polar bears have only much deeper water to turn to farther north.

“It’s important not to jump to conclusions and suggest that the High Arctic, which historically was covered by multiyear sea ice, is going to turn into a haven for polar bears,” says Laidre, also an associate professor in the School of Aquatic and Fishery Sciences.

“The Arctic Ocean around the North Pole is basically an abyss, with very deep waters that will never be as productive as the shallower waters to the south where most polar bears live. So we are talking about temporary benefits in a limited area and to a very small number of bears.”

Additional coauthors are from the government of Nunavut in Canada, the Greenland Institute of Natural Resources, the University of Oslo in Norway, Environment and Climate Change Canada, and the University of Washington.

The governments of Canada, Denmark, Nunavut, and Greenland; NASA; and the World Wildlife Fund supported the work.