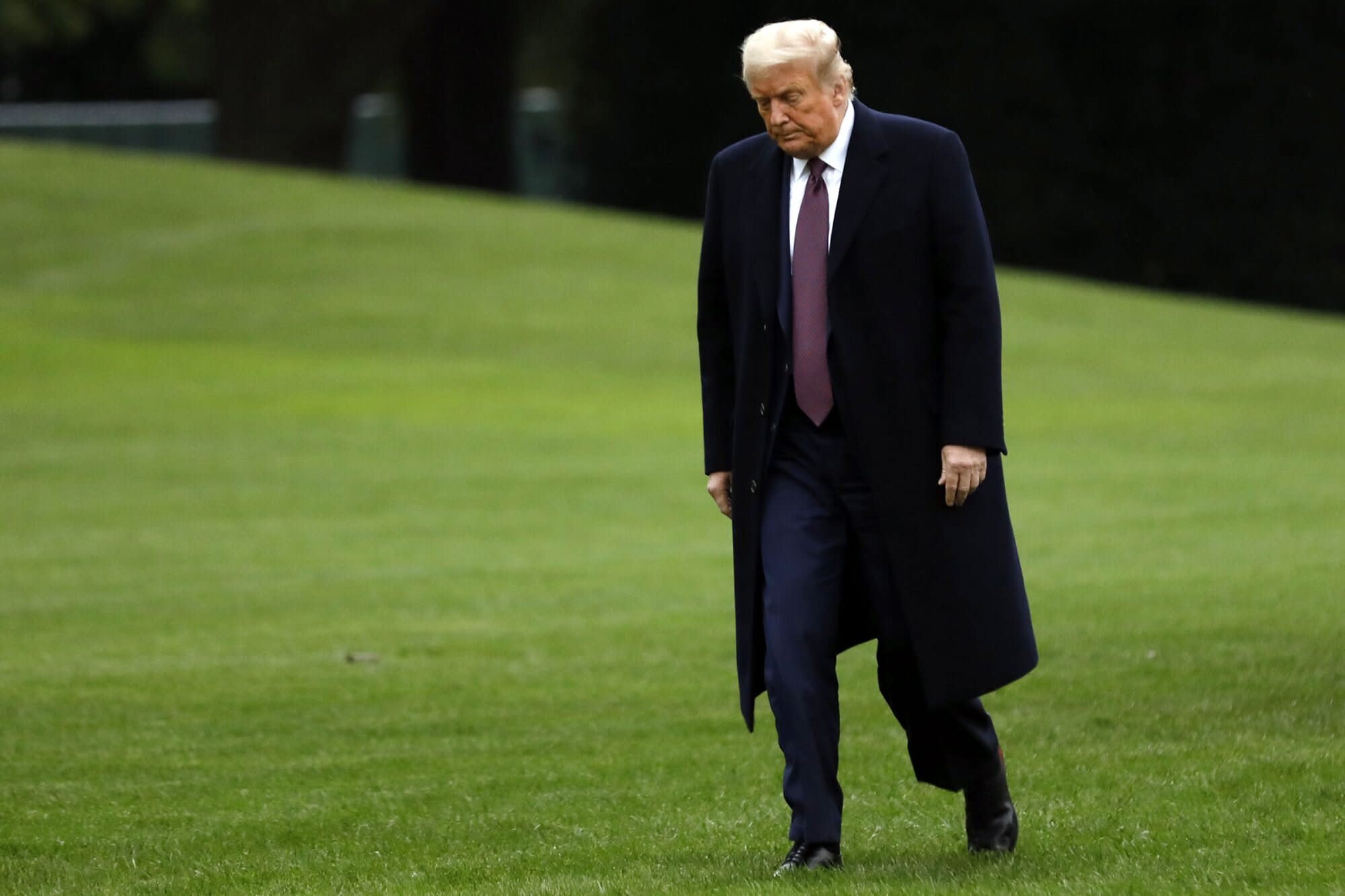 Donald and Melania Trump Test Positive for Coronavirus: ‘We Will Get Through This TOGETHER!’

PLUS: Melania Trump Speaks Out After Being Diagnosed with COVID-19: ‘Please Be Sure You Are Staying Safe’

The 74-year-old president’s late-night announcement immediately made headlines around the globe, turned the Nov. 3 election on its head and added to what’s already been one of the most chaotic years in recent American memory.

The Trumps were experiencing “mild symptoms,” the White House said Friday morning, adding that they were being closely monitored.

“The doctors continue to monitor both his health and the health of the first lady. We’ll continue to do that,” White House Chief of Staff Mark Meadows told reporters. “They’ll be glad to provide some updates later today as we look at this.”

Meadows, who said he tested negative for the coronavirus, added: “I’m optimistic he’ll have a very quick and speedy recovery.”

White House physician Sean Conley said in a memo released soon after Trump’s announcement that the couple was “well at this time and they plan to remain at home within the White House during their convalescence.”

“Rest assured I expect the president to continue carrying out his duties without disruption while recovering, and I will keep you updated on any future developments,” Conley said in his memo.

Speaking with reporters on Friday however, Meadows declined to specify the president’s symptoms or discuss his treatment or how he was conducting business while in quarantine.

The president’s infection also raised questions about when the White House first suspected he was sick and when they made that information public.

Asked about the timeline on Friday, Meadows maintained that officials learned presidential adviser Hope Hicks was sick on Thursday afternoon shortly before the president left the White House for a fundraiser in New Jersey. This means Trump attended the event even knowing he had been previously exposed.

Trump’s COVID-19 test late Thursday confirmed he had the disease.

RELATED: Donald and Melania Trump Test Positive for Coronavirus: ‘We Will Get Through This TOGETHER!’

Trump has traveled to multiple states this week, starting with a trip to Cleveland on Tuesday night for the first presidential debate with Democratic nominee Joe Biden, who said Friday that he had tested negative. (Debate moderator Chris Wallace also said Friday that he’ll be tested for the virus.)

Since the week began, the president has held crowded events at both the White House and on the campaign trail, as well as visiting his Bedminster, New Jersey, golf club for the private fundraiser Thursday.

Here is everything that led to Trump’s announcement Friday morning that he among the 7.3 million people in the U.S. who have contracted COVID-19 this year.

Bloomberg first reported that one of Trump’s top White House advisers, Hope Hicks, tested positive for the virus on Thursday afternoon, raising immediate questions among health officials, the media and the public concerning the president’s own health given his proximity with his advisers.

Trump then confirmed the news about Hicks two hours later during an interview with Fox News host Sean Hannity. Hours later, he announced he had tested positive as well.

Hicks had reportedly tested negative for the virus Wednesday morning, according to NBC News, but began feeling ill during the president’s rally in Duluth, Minnesota. On the way back to Washington, D.C., that night, Hicks was reportedly isolated from the president and other White House staff aboard Air Force One.

The 31-year-old Trump adviser had been in close proximity with the president throughout the week, however, as part of the small team helping him prepare for Tuesday’s debate.

Where Trump Has Traveled This Week

Trump has made stops in Ohio, Minnesota, New Jersey, Maryland, and Washington, D.C., this week, while potentially receiving and giving exposure to the respiratory illness that federal health officials say may or may not show symptoms for up to 14 days.

The president traveled in the morning to his Trump National Golf Club in Potomac Falls, Virginia, though pool reporters following the president’s daily activities did not see him firsthand until he arrived back at the White House shortly after 2:30 p.m. ET.

Trump later held a press briefing at about 5:30 p.m. and entered the room alongside former New Jersey Gov. Chris Christie, who also joined Hicks in helping the president prepare for Tuesday’s debate. Christie said Friday that he lasted tested negative for the virus on Tuesday and was awaiting a new test result back Saturday.

Christie told ABC’s Good Morning America that “no one was wearing a mask in the room when we were prepping the president” earlier this week and said “the group was about five or six people in total.”

Trump held a Rose Garden event at the White House on Monday, where he gave an update on COVID-19 testing and announced a White House plan to distribute 150 million Abbott rapid tests “in the coming weeks.”

Sen. Rob Portman, who was at the event, was being tested Friday “out of an abundance of caution,” according to his spokesperson.

The president’s announcement Friday raised concern about his activity in the timeframe stretching back earlier than this week after Utah Sen. Mike Lee announced he tested positive for COVID-19. NPR reports that Lee was with Trump on Saturday at the White House, along with the president’s Supreme Court nominee judge Amy Coney Barrett. (Barrett said Friday that she tested negative.)

CNN Trump at the first presidential debate on Tuesday

Hicks traveled to Cleveland along with Trump on Tuesday for the debate, though she was not seen inside the debate hall with the president or his family, according to reporters at the event.

NBC News reporter Marianna Sotomayor said Friday that she witnessed the interaction and that the doctor “looked frustrated as she stepped away, prompting a staffer to say, ‘That’s all you can do.’ “

The Trump family was seen not wearing masks after the event.

The president then flew to Minnesota on Wednesday, the day Hicks began showing symptoms, for a string of campaign events.

After briefly mingling with local lawmakers and supporters, Trump’s caravan headed to the suburb of Shorewood, Minnesota, for a private fundraising event at a local home with state lawmakers and operatives. Following that event, Trump and his staff went back to the airport before flying to Duluth for an outdoor campaign rally.

Pool reporters at the rally noted thousands of people attended — and “most” did not wear masks.

Trump and his staff returned to Washington D.C. on Air Force One, where Hicks was reportedly isolated on the return flight.

Trump walked back into the White House after midnight for the second night in a row. Bloomberg reported early Friday morning that Trump’s aides are worried the president’s lack of sleep in recent days, as the campaign hits its final stretch in October, will leave him especially vulnerable to the virus.

On Thursday, Trump flew from Joint Base Andrews in Prince George’s County, Maryland to Morristown Municipal Airport in Morristown, New Jersey, before heading to his private golf club in Bedminster for another fundraising event.

The president has not been seen publicly since, though he did call into Hannity’s show Thursday night, telling the Fox News host that he was awaiting his test results.

The White House cleared the president’s schedule of any public events on Friday, after the president announced he tested positive.

The Trump campaign had scheduled stops with the president in Florida and Wisconsin this weekend.

A statement Friday afternoon from campaign manager Bill Stepien said that “all previously announced campaign events involving the president’s participation are in the process of being moved to virtual events or are being temporarily postponed.”