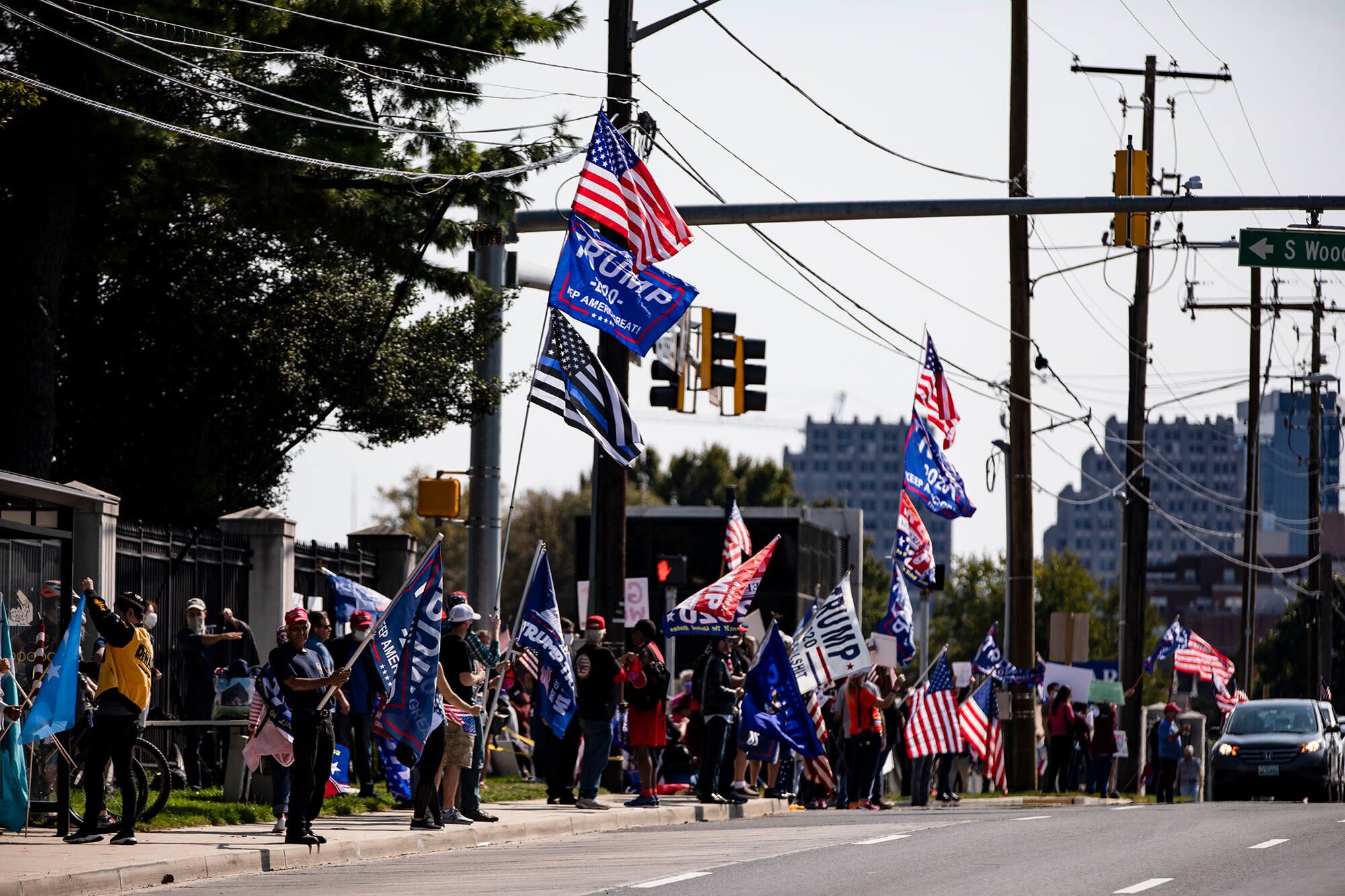 His doctors might still have cause for concern and his critics might still be outraged and his poll numbers might still be dropping — but to the dozens of Donald Trump faithful who flocked to Walter Reed National Military Medical Center on Monday, everything seemed like it was going to be fine.

Tracey Armah, a Black cashier from Bethesda, Maryland, sported American flags under both arms and did not wear a mask. “I’m here to support Donald Trump as president because I think he’s the best president ever,” she told PEOPLE.

“I can support who I want to support. It has nothing to do with race,” she said. “Just because you’re Black doesn’t mean you can’t like him.”

It was a familiar refrain among the Trump fans who made the trek the medical facility, which sits just a minutes-long helicopter ride north of the White House. The president, 74, was hospitalized at Walter Reed on Friday night after announcing he and First Lady Melania Trump were infected that morning.

His doctors, while admitting they were projecting optimism about his condition, said over the weekend that the president had had a fever and experienced two drops in his oxygen levels but was improving. On Monday the medical team said he could continue his treatment at home, “though he may not be entirely out of the woods.”

Doctors declined to answer other questions, such as if Trump tested negative before attending various public events last week and whether he has shown signs of lung damage.

Outside Walter Reed a few hours before Trump’s discharge, supporters spoke glowingly of his performance in office and they spoke dismissively of the pandemic that has killed more than 200,000 people in the U.S.

Like the president — who has faced months of criticism for waffling on public health guidelines and mocking others for wearing masks — they said they would not be troubled by the thought of the virus.

They may be in the minority: Polling has consistently shown that the pandemic remains a key issue for voters ahead of the Nov. 3 election and Trump has for months gotten poor marks on his response.

He continues to enjoy robust support among the Republican base but, reflecting his long history of exaggerations, lies and misstatements, Trump’s message may not reach many other ears.

Since leaving Walter Reed, the president has tried to reframe the discussion around the virus, arguing he in fact showed decisive leadership and fearlessness — while nonetheless flouting basic guidelines — and that the treatments that have been developed make the deadly virus something people can learn to live with.

He has preferred to talk about the possible lockdowns he says Democrats would impose without end — rather than his administration’s problems rolling out testing nationwide and his decision to downplay the virus’ threat, despite its death toll.

Back home on Monday, he urged others not to let the virus “dominate your life.”

“I’m not worried about the virus whatsoever,” she said. “I don’t really care for a mask and the six-feet thing, but I do try to stay safe as much as I can. But I’m not going to stop my life because of a virus, no. I’m still going to live my life.”

Jhonette Gamble — a bubbly hairdresser from Yorktown, Virginia, who said she drove three hours to join the pro-Trump crowd outside the hospital — told PEOPLE there is “lots of enthusiasm for this man.”

“Of course, everybody wants him to get well and recover and get back to doing what he’s best at. And that’s running this country,” Gamble said. “I hope he doubles down on opening America back up by saying, ‘Yup, I’m part of the 99.98 percent that’s fine. I had it and I’m fine,’ and he proves the Democrats wrong on everything that they’ve been saying and doing.”

Even the specter of his possible demise was its own kind of blessing.

“If he’s not fine, then he’s God’s child,” Gamble said. “We get to enjoy him while he’s here. But ultimately he’s God’s kid.”

She felt the same way about herself.

“God gave me an immune system and I’m his child, and if I’m supposed to come home, I’m going home,” she said. “I’m going to get COVID whether I have that mask on or not, if that’s how I’m supposed to die.”

Gamble, who attended a Trump event in Newport News, Virginia, in September but didn’t feel a need to get tested afterwards, said she doesn’t believe masks are protective. Health officials previously said a Trump event in Tulsa, Oklahoma, in June was “more than likely” linked to viral spread there.

“I feel like this is a virus, like people are freaking out and it’s 99 percent recovery,” Gamble said, which is accurate.

“I don’t want to be insensitive, because there are people dying. But people die of pneumonia, they die of bronchitis, they die of things every day we don’t wear masks for, we don’t go into mass hysteria for … And I’m ready to take off the mask,” she said.

“It’s sad that the big businesses were allowed to stay open and the little ones had to close,” Gamble said. “So I do wear one when I’m in there out of respect for the business. But outside of that, no.”

RELATED: What to Know About the Medications Trump Has Taken to Treat His Coronavirus

On the sidewalk outside the hospital, Gamble and others kept tabs on Secret Service and police movement for some sort of indication that Trump would be making his exit.

As drivers passing honked their horns, supporters played music — including the theme song from Rocky, which called to mind a victorious man who had fought, and won, a hard fight.

Though plenty of those in the crowd expressed their displeasure with Democratic presidential hopeful Joe Biden, and liberal-leaning politicians in general, others were more pragmatic.

Cattle-and-hay farmer Joey Hodges, who said he drove three and a half hours from North Carolina to stand by the hospital fence, felt Trump deserves four more years but added he doesn’t think a Biden presidency would destroy the nation.

“Like they’re saying Biden’s going to ruin the country if he gets elected,” Hodges said. “I don’t believe that.”

Conspiracy theories related to the novel coronavirus were represented, too. A man dressed in khakis with a navy jacket and red tie held a cardboard sign reading: “Assassination? Terror? What happened in the Rose Garden? INVESTIGATE!!!” He said he was a local lawyer named Will but declined to give his last name.

Will’s sign was referring to a Sept. 26 Rose Garden event for Supreme Court nominee Amy Coney Barrett. So far, at least 11 attendees of the Rose Garden event have tested positive for the virus, including the president.

“There’s a lot of people who believe that this disease was researched at a bio-weapons laboratory in Wuhan, China,” Will insisted, echoing claims the president made in the spring. “The question is what happened to make all these people sick …. If it was just a contagious person who somehow got through security, we need to figure out who that person was and how they got through that Secret Service. We have to examine all possibilities.”

While the source of the president’s infection remains unclear, he and many others who have since tested positive were seen in close proximity with one another at the Rose Garden event and elsewhere and almost none of them wore masks.

Federal health experts at the Centers for Disease Control and Prevention say mask-wearing greatly reduces the chances of catching (or giving) the virus and can therefore help contain the spread of the virus. Trump himself has vacillated about the need to wear them, at times saying masks are “patriotic,” but other times questioning their use.

Trump emerged from the hospital just after 6:30 p.m. Monday, waving as he boarded Marine One.

Back at the White House, Trump walked up the stairs and stood for a photo op on the balcony, taking off his mask and putting it in his pocket despite the fact that he is still contagious and was near other people.

That night, he vowed he would not stay home for long.

“Will be back on the Campaign Trail soon!!!” he tweeted. “The Fake News only shows the Fake Polls.”