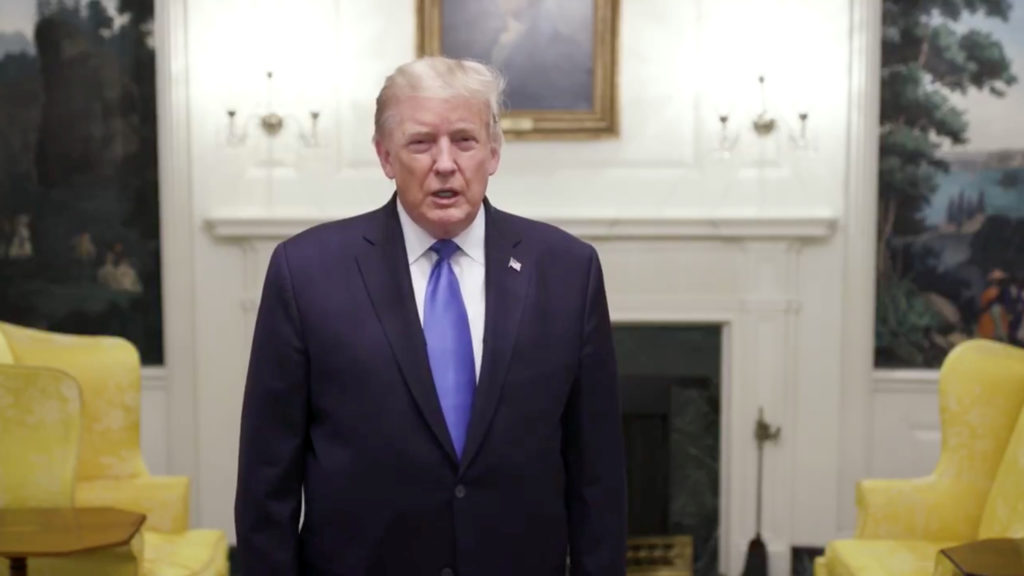 WASHINGTON — The Latest on coronavirus infections hitting President Donald Trump and others in his circle (all times EDT):

President Donald Trump has told his longtime friend and sometimes lawyer Rudy Giuliani that he’s “going to beat” the coronavirus.

Trump reportedly told Giuliani on the call: “I feel I could get out of here right now. But they’re telling me there can always be a backstep with this disease. But I feel I could go out and do a rally.”

Trump also reportedly explained that he continued to engage in high-risk activity despite the pandemic because he’s the “president of the United States. I can’t lock myself in a room. … I had to confront (the virus) so the American people stopped being afraid of it so we could deal with it responsibly.”

He also said he hopes that by beating the virus he “will be able to show people we can deal with this disease responsibly, but we shouldn’t be afraid of it.”

Trump is being treated around the clock by a team of doctors at Walter Reed National Military Medical Center.

Joe Biden says he urged some governors who wanted to endorse his presidential campaign to refrain from doing so because the Trump administration might retaliate by withholding medical supplies critical to COVID-19 relief.

“I told some governors, don’t endorse me who wanted to endorse me. Don’t endorse me because you’ll pay a penalty,” Biden said. “You won’t get what you need from the federal government in terms of COVID prep.”

Biden’s campaign has drawn the support of some leading Republicans who have broken ranks against their own party and President Donald Trump.

Asked what he would do differently in handling the coronavirus pandemic than Trump, Biden responded, “I don’t want to be attacking the president and the first lady now because they now have contracted the coronavirus.”

“Jill and I pray for their quick and full recovery,” he added, referring to his wife, Jill.

With President Donald Trump in the hospital, his campaign is launching an effort it’s calling “Operation MAGA” to maintain momentum.

The operation entails “a full marshalling of top-level surrogates, campaign coalitions and Trump supporters” to carry the campaign until Trump can return to the trail, according to a campaign statement. Vice President Mike Pence and Trump’s family will be prime players in the effort, which will feature a series of online events leading up to Wednesday’s vice presidential debate before moving to in-person events.

It’s unclear how the new plan differs from the campaign’s operations before Trump was hospitalized. Pence and the first family was already actively campaigning.

Pence outlined the effort in an all-staff conference call Saturday afternoon with campaign manager Bill Stepien, who has also been diagnosed with COVID-19.

“I want to encourage you to stay in the fight,” Pence told the staff.

President Donald Trump says he’s “feeling well” and has voiced his appreciation for the medical professionals treating him for COVID-19 at a military hospital.

On Saturday, Trump tweeted, “Doctors, Nurses and ALL at the GREAT Walter Reed Medical Center, and others from likewise incredible institutions who have joined them, are AMAZING!!!”

He also says, “With their help, I am feeling well!”

It comes as White House chief of staff Mark Meadows said Trump went through a “very concerning” period Friday and the next 48 hours will be critical in terms of his care.

Trump’s doctors painted a rosy picture of the president’s health in a press conference at Walter Reed National Military Medical Center. But the briefing raised more questions than it answered.

The White House says Trump is expected to stay at the hospital for “a few days” and would continue to work from the hospital’s presidential suite, which is equipped to allow him to keep up his official duties.

A person familiar with President Donald Trump’s medical condition says the president had been administered supplemental oxygen at the White House on Friday before he was hospitalized.

The person was not authorized to speak publicly and spoke to The Associated Press on condition of anonymity. The revelation follows a press conference by Trump’s doctors where they refused to confirm the president had been on oxygen following his COVID-19 diagnosis Thursday. The doctors would only say that Trump was not on oxygen at the hospital.

First lady Melania Trump also has tested positive for COVID-19 and is recovering at home.

Trump’s doctors held a press conference Saturday at Walter Reed Medical Center, where the president was transported Friday. They said he was doing very well and his symptoms were improving.

However, a person familiar with the president’s illness said Trump’s condition was “very concerning” but he has been improving since going to the hospital. The person was not authorized to speak publicly and spoke to AP on condition of anonymity.

Trump sent a tweet around 1 a.m. Friday confirming he had been diagnosed with coronavirus, along with first lady Melania Trump.

On Thursday evening, Trump called into Fox News host Sean Hannity’s show, where he discussed aide Hope Hicks’ diagnosis and that he had been tested for the illness. But he did not say whether he had suffered symptoms.

A statement from Trump’s doctors early Friday did not mention the president having symptoms.

Christie said Saturday that he will be receiving medical attention and “will keep the necessary folks apprised of my condition.”

He did not say whether he had symptoms.

Christie had said the last time he was with President Donald Trump was Tuesday during preparations for the first debate with former Vice President Joe Biden in Cleveland.

He was not at Trump’s Bedminster fundraiser in New Jersey on Thursday.

He had tweeted Friday morning that he had last tested negative ahead of Tuesday’s debate.

Senate Republicans have canceled legislative work until Oct. 19 as the coronavirus sweeps through their ranks and lawmakers increasingly call for comprehensive testing on Capitol Hill.

One by one, President Donald Trump and a series of GOP lawmakers have fallen ill with the virus that has killed more than 208,000 Americans.

Over the last week, many of the politicians who tested positive attended events at which few people wore masks and mingled in the halls and tunnels of the Capitol complex.

Just since Friday morning, Trump, Sen. Thom Tillis of North Carolina, Mike Lee of Utah and Ron Johnson of Wisconsin announced that they have tested positive.

The Senate was to reconvene this week ahead of its confirmation proceedings for Barrett. McConnell has said those hearings, scheduled to begin Oct. 12, are “full steam ahead.”

A person familiar with President Donald Trump’s COVID-19 illness says some of his vital signs over the past 24 hours were “very concerning” but they’ve improved since he was admitted to a military hospital.

The person has knowledge of the president’s medical condition but was not authorized to speak publicly and spoke to The Associated Press on condition of anonymity.

It contradicted Trump’s doctors, who said during a press conference Saturday that the president was doing very well and felt as though he could walk out of a military hospital. They said he had not been on oxygen Saturday or when he was with their medical team Friday, and that his symptoms were subsiding.

The person described the next 48 hours as critical and said there was no clear path yet on a recovery and that it could be days before he was discharged.

President Donald Trump’s doctors say the president is doing well, is fever-free and isn’t having difficulty breathing after contracting the coronavirus.

Doctors said Saturday that Trump was not on supplemental oxygen, and while he had fatigue, nasal congestion and coughing, his symptoms are now resolving and improving.

Dr. Sean Conley, Trump’s physician, refused to say whether Trump had been on supplemental oxygen at any point during his illness, saying he was not on it Saturday or Thursday or Friday while he was with the medical team from Walter Reed Medical Center.

Trump was transferred to the military hospital on Friday afternoon in what doctors say was a precaution after he and first lady Melania Trump tested positive for COVID-19. He has not transferred powers.

Conley says the president has “a lot of work to do” and is doing it.

Doctors say the president told them: “I feel like I could walk out of here today.”

Three Republican congressmen from Minnesota are facing criticism for taking a commercial flight home from Washington just two days after they were on Air Force One with President Donald Trump.

Reps. Pete Stauber, Tom Emmer and Jim Hagedorn were on a Delta Air Lines flight Friday night despite its restrictions on passengers recently exposed to COVID-19. Trump announced early Friday that he had tested positive for the virus.

Delta’s policy says customers who know they were exposed to the virus in the past 14 days cannot travel. The airline defines exposure as face-to-face contact with someone with the virus or sustained contact for more than 15 minutes less than 6 feet (2 meters) apart.

Hagedorn pushed back in a post on his campaign Facebook page Saturday, saying the three men had tested negative and had not been exposed to someone carrying the virus longer than 15 minutes and closer than 6 feet (2 meters). He said they also informed the airline and the flight’s captain of their situation and Delta “made the decision to fly based upon the facts.”

Delta spokeswoman Gina Laughlin told the Minneapolis Star Tribune that the flight was less than 40% full and that no one left the plane before it took off to protest the men’s presence.

The White House says President Donald Trump’s doctor will provide an update on his condition Saturday morning as the president undergoes treatment for COVID-19 symptoms at a military hospital.

In a late Friday letter, Conley reported that Trump had been treated at the hospital with remdesivir, an antiviral medication, after taking another experimental drug at the White House. He added that Trump is “doing very well” and is “not requiring any supplemental oxygen.”

The White House said Trump was expected to stay at the hospital for “a few days” out of an abundance of caution and that he would continue to work from the hospital’s presidential suite, which is equipped to allow him to keep up his official duties.

Johnson, a second-term Republican, had reported exposure last month to someone who tested positive for COVID-19, and quarantined for 14 days without developing symptoms. Johnson said he tested negative twice during that time.

He returned to Washington on Sept. 29 and said he was exposed soon after that to someone who tested positive. Johnson says he was tested Friday afternoon after learning of the exposure, and it came back positive.

Johnson said he feels healthy and doesn’t have symptoms, but will isolate until cleared by his doctor.