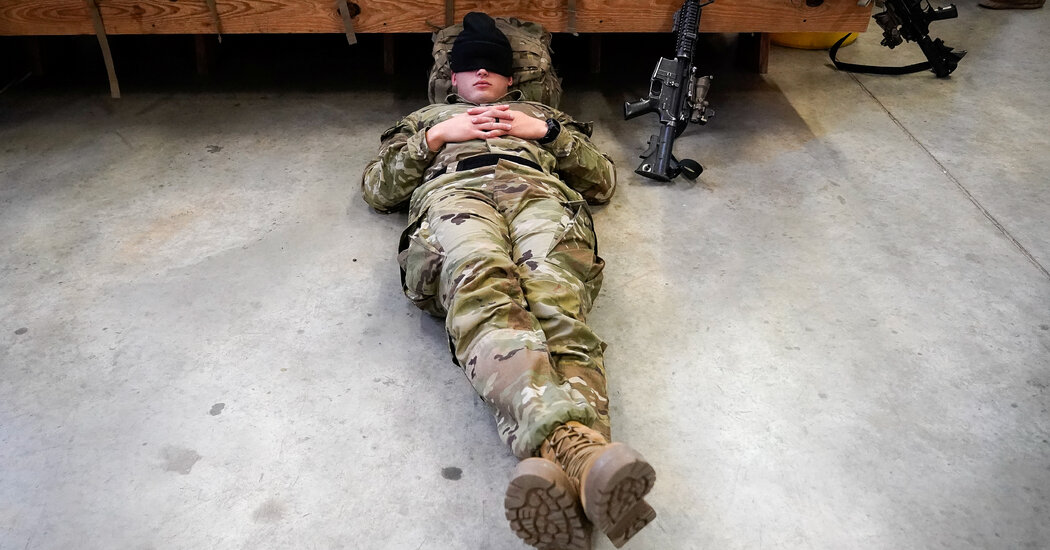 Turns out Beetle Bailey had it right all along.

The loafing comic-strip Army private has been sleeping on duty for 70 years, to the frequent fury of his platoon sergeant. But on Wednesday, the Army released new guidelines for optimal soldier performance — and they include strategic and aggressive napping.

The recommendation is part of an overhaul of the Army’s physical fitness training field manual, which was rebranded this week as the FM 7-22 Holistic Health and Fitness manual. No longer is the guide focused entirely on grueling physical challenges like long ruck marches and pull-ups. Now it has chapters on setting goals, visualizing success, “spiritual readiness” and, yes, the art of the nap.

“Soldiers can use short, infrequent naps to restore wakefulness and promote performance,” the new manual advises. “When routinely available sleep time is difficult to predict, soldiers might take the longest nap possible as frequently as time is available.”

It is the first update to the manual in eight years, and it reflects growing scientific evidence that peak physical performance includes more than just physical training.

“The goal of the Holistic Health and Fitness System is to build physical lethality and mental toughness to win quickly and return home healthy,” the introduction tells readers.

The manual also has updates on running techniques to avoid injury, and a section on the importance of spirituality, with entries on meditation, journaling and how the “act of serving others” helps some soldiers realize the “interconnectedness of all things and people.”

That is a conversation Private Bailey never had with Sarge.

To promote good sleep, the manual warns soldiers to avoid video games, texting and other screen activity before bed, and recommends winding down by “listening to soothing music, reading, or taking a warm shower or bath” instead. It also says to avoid alcohol before sleep.

The new guidance comes as the military has become increasingly aware that chronic sleep deprivation during missions can cripple decision-making and lead to disaster. The Navy recently overhauled sleep schedules at sea after determining that fatigue was a factor in two fatal warship collisions.

During deployments in Iraq and Afghanistan, commanders often failed to prioritize sleep. Changing schedules, long duty shifts and overnight missions led to chronic fatigue that fueled a voracious dependency on energy drinks, which left many troops feeling frazzled. Army research found that soldiers who guzzled energy drinks had higher levels of mental health problems, which can make it harder to deal with the stresses of missions.

“The Army has always had an internal dynamic that real men don’t need sleep and can just push on, and it’s incredibly stupid,” said Lt. Gen. David Barno, who was commander of combined forces in Afghanistan from 2003 to 2005. “Combat is a thinking man’s business and your brain doesn’t function without sleep.”

General Barno said he worked hard to “protect eight hours of sleep a night” while deployed and found that it gave him a clearheaded advantage to accomplish his mission. Putting that practice in official doctrine, he said, will help put old beliefs that sleep is a luxury to rest.

“The Army is on to something here,” said Phillip Carter, a former soldier who served during the Iraq War and now teaches veterans’ policy at Georgetown University. “The old manual looked like something out of a gym class from the 1960s. There was lots of jumping jacks and wind sprints. It wasn’t keeping pace about what we knew about combat. The truth is, we know sleep is critical to better decision-making.”

The military’s interest in holistic health began years ago in elite Special Operations units, which brought in trainers, dietitians and wellness coaches and treated operators like elite athletes.

The shift to a broad approach to fitness that includes sustainable exercise, better recovery and proper sleep and nutrition could have big payoffs in the wider military, Mr. Carter said, both in terms of lifelong well-being and in monetary savings for the taxpayer.

Worn-out knees, injured backs and other musculoskeletal injuries are the leading reasons that troops receive disability payments after leaving the military. “The government is spending billions of dollars a year to compensate troops for breaking them in service,” Mr. Carter said. “If it’s just a little bit better, it could be a huge difference.”