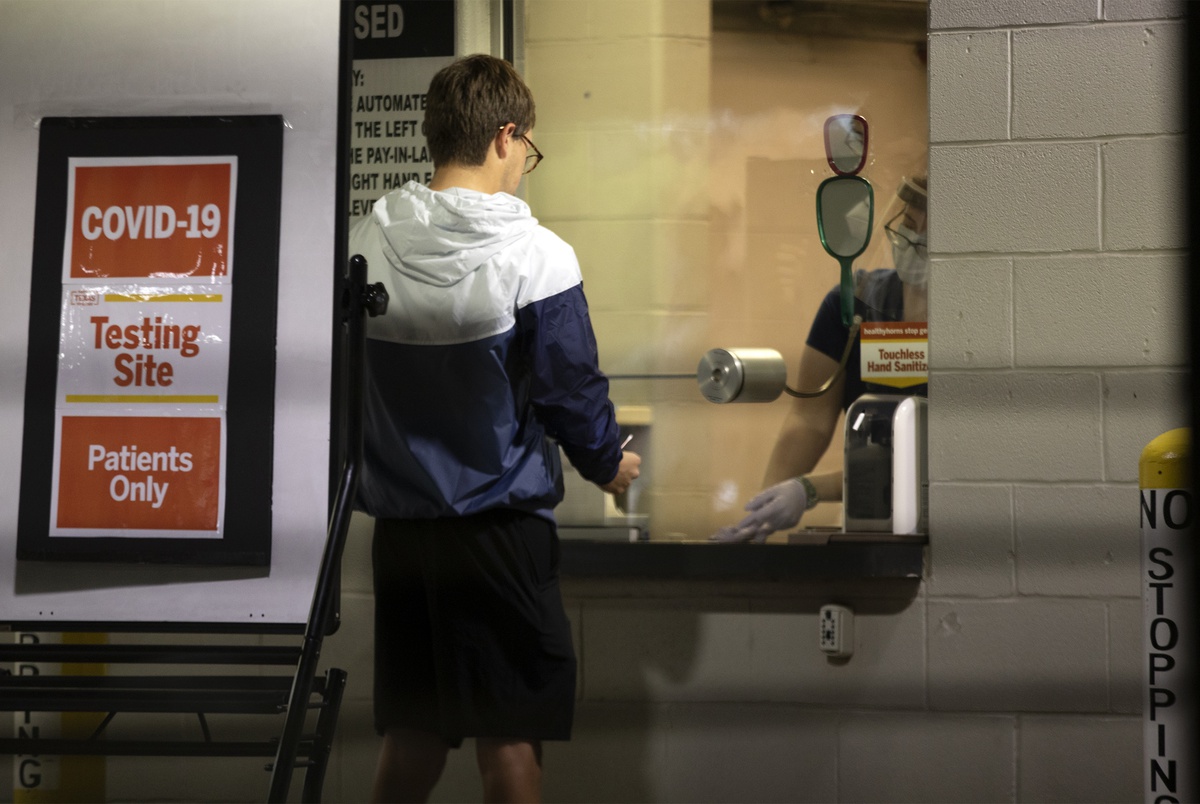 Need to stay updated on coronavirus news in Texas? Our evening roundup will help you stay on top of the day’s latest updates. Sign up here.

State and business leaders are hanging their hopes on the promise of new rapid coronavirus tests that they say could allow Texans to return to aspects of their daily lives more safely during the pandemic, at least until a COVID-19 vaccine is made widely available.

Gov. Greg Abbott has touted that Texas is set to receive millions of new rapid antigen coronavirus tests every month that deliver results in as little as 15 minutes.

But health experts caution that the tests are not a panacea. Antigen tests — typically nasal or saliva tests that can detect proteins on the outside of the virus — are more prone to giving false negative results than other coronavirus tests that use genetic material. And because the antigen tests aren’t included in the state’s official case counts, it could be harder to see how the virus is spreading within a community.

“As we move more and more into antigen testing, it’s going to look like we don’t have as many cases because those people who tested positive with the antigen test don’t count as a case,” said Catherine Troisi, an infectious disease epidemiologist at UTHealth School of Public Health in Houston. “That’s going to make us think we’re doing better than we are, or certainly has that possibility, and it does not allow public health to truly see what’s happening in the community.”

Still, experts say it’s a step in the right direction toward widespread testing, which has eluded Texas and much of the country, while being considered a key measure to getting the pandemic under control.

Rapid testing is gaining traction nationwide, with one manufacturer planning to ship 50 million tests across the country each month. Already, rapid testing is being touted as a way to safely get people back into the office, into stadiums for sports or a way to give people comfort about flying in airplanes again.

Aaron Cox, interim chief operations officer and senior vice president of the Texas Association of Business, said rapid testing programs could be used in several different types of operations, such as restaurants, hospitals or manufacturing facilities.

He said rapid testing could restore the feeling of security needed for a true economic rebound.

“I think it’s a benefit to the business for sure, but it’s also a benefit to all of us,” Cox said. “Because to the extent that [the tests] can do … what they do, we can all get back even more to patronizing those businesses and getting to work and getting to schools and doing all of the things that are going to lead to our long-term recovery.”

United Airlines started a pilot program for passengers to get a coronavirus test result in about 15 minutes before flying. The program begins Oct. 15 at the San Francisco International Airport, and passengers can also mail in their test and get results in three days.

Airlines have taken a massive hit in the pandemic amid travel restrictions and passenger concerns about safety. The four largest airlines have lost more than $10 billion combined.

“We don’t have a crystal ball, but we do know that COVID is going to be here for awhile,” Rodney Cox, vice president of the United Airlines hub at the George Bush Intercontinental Airport in Houston, said in an interview with The Texas Tribune. “We don’t anticipate a vaccine anytime soon. We know that people want to travel and they want to get out. And we believe that this is just a great opportunity for us and we will continue expanding the program if it’s successful into other hubs and give people the freedom to travel if they so choose to do so.”

“You want to get out, you don’t want to stay in your hotel room 14 days,” he said. “So this provides a way for employees to feel comfortable, [for travelers] to demonstrate to the authorities in those countries or those states that they are COVID free, that they are not sick.”

Unlike most rapid tests that are antigen tests, United Airlines is using molecular tests, which can detect the presence of the coronavirus’ genetic material. Those tests are more expensive but considered more reliable.At the University of Texas at Austin, rapid tests played a factor in the Longhorns’ home opener and helped keep students attending the game safer, said John Bianco, spokesperson for UT Athletics.

For students, a negative test result the day before the game was a requirement to get into the stadium. The university provided the pre-game rapid tests and tested nearly 1,200 students; 1,103 were negative and 95 were positive. Other fans who attended the game were not required to be tested.

The university will be providing tests again at future home football games, including against Texas Christian University on Saturday, Bianco said.

“We believe this will serve as an additional benefit to our extensive health and safety measures already in place and also helps improve the health of our students and their community in Austin,” Bianco said.

The governor said the state will be receiving millions of these rapid COVID-19 tests each month at a Sept. 17 press briefing. Some of the tests are made by a medical technology company called Abbott (no relation to the governor), said Chris Van Deusen, spokesperson for the Texas Department of State Health Services in an email.

“Texas is scheduled to receive millions of these 15-minute tests per month that will let Texans know immediately if they have COVID,” Abbott said.

But the state has yet to provide details about how many tests will be available and how they will be deployed. John Wittman, a spokesman for the governor, said the tests are being provided by the federal government, and more information should be available this week.

The company said in a late August news release that the tests will be sold for $5, give results in 15 minutes and are about the size of a credit card. The tests will be paired with a mobile app which displays the results.

Not a perfect solution

The rapid tests could help public health officials reach their goal of widespread testing to slow the spread of the virus, said Rajesh Nandy, associate professor of biostatistics and epidemiology at the University of North Texas Health Science Center at Fort Worth.

Testing availability was a problem particularly in the early months of the pandemic. Oftentimes, testing wasn’t available for asymptomatic people, and some Texans reported that results took several weeks to come in.

But Troisi warned that the antigen tests are more likely to give false negatives.

The U.S. Food and Drug Administration says while a positive test result on an antigen test is “highly accurate,” “antigen tests are more likely to miss an active coronavirus infection compared to molecular tests.”

Troisi added that even at $5 the cost of several tests can add up, meaning they may be less accessible to low-income Texans.

Joseph Petrosino, chair of molecular virology and microbiology at Baylor College of Medicine, said the rapid tests are “a step in the right direction.”

However, he said one-time tests given at a football game or concert are less useful because the tests are more likely to produce false negatives.

Taking multiple tests can eliminate the chances of having a false negative result, and it’s why they will be most useful in congregate settings like schools or workplaces where the same people are tested every three to four days, Petrosino said.

The Texas DSHS only lists molecular tests in its official case count, which means antigen tests are not tracked in detail. The state does list them separately in its breakdown of the number of tests performed, but without any breakdown by location. DSHS reported Wednesday 748,967 total confirmed COVID-19 cases out of 6,237,157 tests and 10,266 positive antigen tests out of 99,412.

Cases diagnosed through antigen testing are classified as “probable” in Texas and nationally, Chris Van Deusen said, which effectively means they are not confirmed cases.

“It’s difficult to say at this point … what the effects of those tests will be [on state reporting] without final plans on how they’ll be deployed,” he said.

Disclosure: Texas Association of Business, Texas Christian University, University of Texas at Austin and University of North Texas have been financial supporters of The Texas Tribune, a nonprofit, nonpartisan news organization that is funded in part by donations from members, foundations and corporate sponsors. Financial supporters play no role in the Tribune’s journalism. Find a complete list of them here.