The experience of police violence is associated with mental and emotional trauma distinct from that caused by other kinds of violence, creating a public health crisis for communities most affected.

Simply put, the experience of police violence puts Black, Latino, Indigenous, and sexual minority communities at higher risk of distinct mental health problems, in addition to greater risk of death at the hands of police, according to the paper.

The study is authored by a group of researchers at several universities, including UC Riverside, who have been examining the mental health effects of police violence at the population level for several years.

It’s a public health issue because police violence is not experienced equally in our society but instead has a disproportionate effect on the mental health of racial, ethnic, and sexual minorities. The point of our paper is to indicate

The study was published in the journal Nature and details how the controversial hydraulic fracturing drilling sites are registering radiation levels above normal background levels, Reuters reported.

Sites within 12 miles downwind of 100 fracking wells were found to have radiation levels that are about 7 percent above normal background levels, according to the study.

Harvard researchers analyzed thousands of the U.S. Environmental Protection Agency’s radiation monitor readings nationwide from 2011 to 2017 for its data.

The study added that readings could ascend much higher in areas closer to drilling sites or locations with higher concentrations of fracking wells.

“The increases are not extremely dangerous, but could raise certain health risks to people living nearby,” said the study’s lead author, Petros

A study in mice provides clues about the common molecular origins of chronic stress and depression. The discovery could inform new treatments for mood disorders.

Millions of years ago, our ancestors evolved the physiological responses needed to survive in the face of sudden threats from rivals and predators.

The release of hormones, including epinephrine (adrenaline), noradrenaline (norepinephrine), and the steroid hormone cortisol, trigger these “fight-or-flight” stress responses.

However, sustained or chronic stress that does not resolve when the immediate threat passes is a major risk factor for the development of mood disorders such as anxiety and depression.

People with these mood disorders have abnormally high and sustained stress hormone levels, which puts them at an increased risk of developing cardiovascular disease.

Researchers at the Karolinska Institutet in Stockholm,

One of the most significant questions about the novel coronavirus is whether people who are infected are immune from reinfection and, if so, for how long.

To determine the answer, University of Arizona Health Sciences researchers studied the production of antibodies from a sample of nearly 6,000 people and found immunity persists for at least several months after being infected with SARS-CoV-2, the virus that causes COVID-19.

“We clearly see high-quality antibodies still being produced five to seven months after SARS-CoV-2 infection,” said Deepta Bhattacharya, PhD, associate professor, UArizona College of Medicine – Tucson, Department of Immunobiology. “Many concerns have been expressed about immunity against COVID-19 not lasting. We used this study to investigate that question and found immunity is stable for at least five months.”

Experiments done in controlled laboratory environments at 20, 30 and 40 degrees C showed that the survival

A nonprofit organization led a study that explores what might happen if people who are homeless are given financial support and the results may surprise you.

Foundations for Social Change, a Canadian charitable organization based in Vancouver, British Columbia, teamed up with the University of British Columbia for a social program, called the New Leaf Project. Researchers gave 7,500 Canadian dollars (approximately $5,717.27) via direct transfer to 50 people who had recently become homeless. The people were free to use the money as they saw fit with no restrictions.

To the surprise of the researchers, most of the recipients used the cash to turn their lives around. “Preliminary results show that on average, those receiving the direct cash payment moved into stable housing faster, maintained a level of financial security and stability over 12 months of follow-up, and increased their spending on food, clothing and rent,” said Foundations for Social

Weine claims that the international solidarity shown in support of the Black Lives Matter movement ought to inspire the field of Global Mental Health to take inventory of its own practices. In particular, he calls on the field to reflect on how it may contribute to modern-day colonialism and work toward actively addressing racism.

“When it comes to thinking about the nexus of racism and violence, global mental health practitioners have not shied away from these topics, but nor has the field led the necessary efforts to catalyze change,” Weine writes. 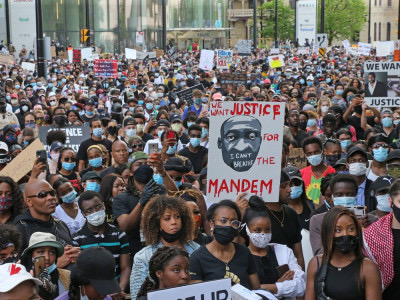 Despite the known toll racism

Why a treatment used for over a century on diseases like measles, mumps and influenza could work to treat the new coronavirus strain.

A team of researchers, including two from the University of Wisconsin-Madison, has solved a long-running biological mystery, reporting the discovery of the first two viral relatives of rubella, also known as German Measles.

“Rubella was this lone wolf, this mystery, this virus that never had any relatives,” said Tony Goldberg, an epidemiologist at UW, who maintains a research project in Uganda’s Kibale National Park. It was at Kibale that one of the two new viral relatives was found in the aptly named cyclops leaf-nosed bat. The bat virus has been named ruhugu.

Goldberg and his former doctoral student Andrew J. Bennett teamed up with U.S. and German researchers to report the two rubella relatives in a paper published Wednesday in the journal Nature.

Contact-tracing and exposure-notification apps are a new technology rapidly developed and launched to respond to the COVID-19 global health crisis. The development of such applications is placing governments, corporations, and citizens around the world into an ongoing ethical design experiment resulting in potentially life-saving outcomes but also potential risks. During the summer of 2020, design teams and technology corporations presented governments with a variety of technological solutions in the form of those apps. Government leaders and ordinary citizens have needed to make decisions about which options to endorse and how to govern their use.

Early in the COVID-19 pandemic, as discussions swirled around the adoption of exposure notification or contact-tracing apps, Dr. Teresa Scassa, Dr. Jason Millar, and