A candidate for the Macomb Township board has filed a lawsuit seeking recovery of all pay and benefits received by former township trustee Dino Bucci, who is awaiting sentencing on federal charges in a public corruption probe.

Bucci, 60, pleaded guilty in May to extortion and conspiracy to commit theft concerning programs with federal funds. He has admitted his role in a “pay-to-play” scheme in which he solicited and accepted more than $60,000 in bribes from a contractor in exchange for a lucrative paving job in the township. 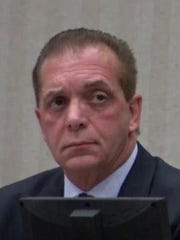 The complaint from Attorney Frank Cusumano Jr., one of seven candidates running for four board seats in the Nov. 3 election, seeks recovery of all of Bucci’s salary and wages since Nov. 5, 2014 — the date he has admitted taking his first bribe from Christopher Sorrentino — until his retirement in November 2018. Sorrentino faces up to