The southern Dallas community of Joppa got some much-needed relief Tuesday when the Dallas City Council allocated $500,000 to provide immediate, free, “on-demand” transportation via Dallas Area Rapid Transit during construction of a long-awaited pedestrian bridge over the nearby Union Pacific Railroad tracks.

Access has long been a problem in Joppa — pronounced jop-ee — a freedman’s town founded in 1872 by emancipated slave Henry Critz Hines. Joppa, with an estimated population of about 750, lies 6 miles southeast of downtown, between the wetlands of the Trinity River and the Union Pacific train tracks.

Adam Bazaldua, whose District 7 includes Joppa, was among those voting for the measure, which the council approved unanimously, with nary a murmur of dissent.

Even so, Bazaldua called it “an example of what should be considered a basic quality of life that we are unfortunately viewing as a celebration. Because, don’t get me wrong, this is a celebration and a win for the community of Joppa. But for the city of Dallas, this is something that we should look at ultimately as a failure. That we have to look at little wins like this just to provide basic quality of life that other communities across Dallas are afforded and expect.”

Construction of a pedestrian bridge over the Union Pacific tracks is expected to last until October 2023.

The councilman said the $500,000 will cover only the on-demand DART service.

The most recent access concern dates to 2018, when Union Pacific closed a key stretch of Linfield Road, which served as the primary means of pedestrian access to the community.

As Mark Lamster, the architecture critic of The Dallas Morning News, wrote in a recent special report devoted to Joppa:

“Even before it was shuttered, that crossing was no bargain, the trip entailing a treacherous journey across nearly a dozen railroad tracks. For the disabled, navigating it was especially difficult. But at least it was a way across. When it was closed, however, neither the city nor the railroad provided any alternative for Joppa’s now-stranded population.”

The city opted in 2006 to build a vehicular bridge over the tracks but with no accommodation for pedestrians, cyclists or the disabled. Lamster noted that only one DART bus route, the 444, comes through Joppa but only during weekday rush hours. Between 9:03 a.m. and 3:24 p.m., there is no bus. The last bus to return to Joppa arrives at 8:01 p.m. On the weekends, there is no service at all.

Details on how to access the new service were not immediately available.

Tuesday’s vote represents an improvement, though in the view of the councilman and at least one resident, it’s hardly a panacea.

“The impact of this is a long-overdue improvement that should have been done when the bridge into Joppa via Linfield Road was put in, so to avoid having to go through the railroad track,” Bazaldua said.

Edgar Green, 71, who has lived in Joppa “since I was a year and a few months,” welcomed Tuesday’s news for what it was but says, because of what’s happened in the past, he reserves the right to feel skeptical.

“Well, $500,000, huh?” Green said. “It will be somewhat of a help, but it depends on what all is involved in $500,000. That doesn’t seem like a whole lot of money to me when the community also wants a wall to ward off the noise that the railroad creates.”

During bridge construction, pedestrians will continue to use “the bridge they have now,” Bazaldua said. He noted, however, that it puts them at risk, because it’s devoid “of any pedestrian walkway. For instance, if there are two lanes of traffic, going to and from the entrance of Joppa from [Texas State Highway] 310, and there were trains underneath, you would essentially be a pedestrian walking on what I would consider to be a large and busy road.”

Transportation is merely one of a series of needs in Joppa.

The Robert Wood Johnson Foundation announced on Oct. 1 the investment of $356,000 in a three-year effort to examine the links between human health and air pollution in Joppa, which is adjacent to several industrial facilities. The Joppa Environmental Health Project, a joint effort of Texas A&M University and the Dallas environmental group Downwinders at Risk, is one of 16 national proposals funded by the foundation’s Interdisciplinary Research Leaders grant. 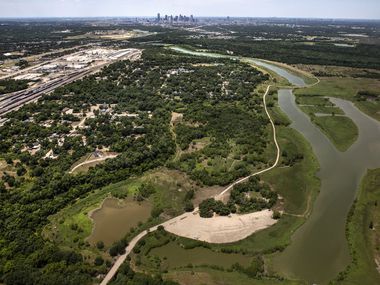 Jim Schermbeck, the director of Downwinders at Risk, was among those on Tuesday who applauded the fact “that they’re finally paying attention to access to the community.”

Schermbeck called the lack of access “a pathetic situation. It’s well past the time for Joppa to be fully connected to the rest of Dallas. The funding of this pedestrian bridge, if it’s done well enough, could be a gateway that the community is very proud of.”