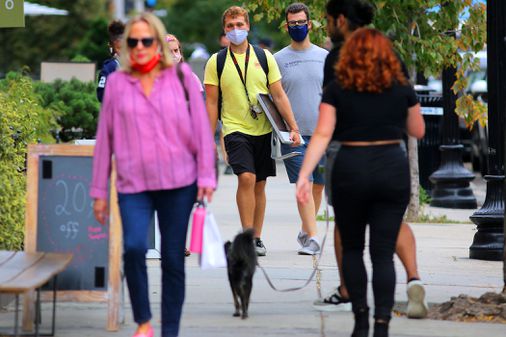 Starting Monday, lower-risk communities across the state can reopen some businesses under Phase 3, Step 2 of the economic recovery plan implemented earlier this year. The changes will loosen restrictions, including allowing more people to gather in places like performance venues, gyms, museums, and libraries.

Governor Charlie Baker said that the state was using a targeted approach that would not allow communities still hit hard by the virus to loosen restrictions.

Some public experts have been concerned about easing those restrictions, particularly as the state has seen an increasing positivity rate, climbing from .8 percent as of Sept. 23 to 1.1 percent as of Saturday.

The state’s latest coronavirus figures brought the state’s death toll to 9,295 Sunday, the state reported, while the total number of confirmed cases climbed to 132,440.

As of Saturday, the three-day average of patients being treated for the coronavirus in hospitals was 425, the state said. According to dashboard data, two hospitals were using surge capacity to treat COVID-19 patients Saturday.

Johns Hopkins University reported Sunday that there have been nearly 210,000 deaths nationwide due to the coronavirus, and more than 7.4 million cases of the disease have been reported.

The cases from last week include a cluster of 33 students who socialized together, according to the university, and are now self-isolated off campus.

Brandi Hephner LaBanc, the university’s vice chancellor for student affairs and campus life, told students in a Thursday e-mail that those 33 students probably contracted the virus by either attending a social gathering last month, or being with someone who was there. She said students have cooperated with contact tracers.

“As leading public health experts are emphasizing, shaming one another, making assumptions, or pointing fingers helps none of us: We are in this together and vigilance everywhere is key!” she said in the e-mail.

On Sunday, Milton schools Superintendent James F. Jette notified families in a letter that the Pierce Middle School will be closed for a minimum of two weeks after the three positive cases were reported.

The school will switch to remote learning and the building will be closed from Monday through Oct. 16, Jette said in the letter.

Officials will revisit the decision during the week of Oct. 13, he said. If all goes well, the school will resume its hybrid model Oct. 19.

The letter did not say how many people were quarantined as a results of the recent positive cases.

“With three positive cases of COVID 19 at the Pierce within the past five days and the subsequent quarantine requirements of close contacts, we do not have the necessary staffing to safely keep the building open and adequately educate students in the hybrid model,” Jette said.

In Attleboro, Mayor Paul Heroux said Sunday that 12 members of the city’s Fire Department staff tested positive for COVID-19, including a deputy chief who had been hospitalized for it. The deputy chief is now at home and recovering, Heroux said.

“Everyone is doing better. The deputy chief is able to go outside on his own. He’s doing well. Expect everyone else back to work within a week,” Heroux said in an e-mail Sunday.

The city is awaiting results on nine pending tests on Fire Department staff, including three firefighters who were tested Sunday, Heroux said. Members with pending tests have not been at work.

A total of 85 Fire Department staff have tested negative for the coronavirus, according to Heroux.

In a separate statement Friday, Fire Chief Scott Lachance said he is optimistic that officials have contained the situation. The department will have follow-up testing to ensure that firefighters are safe.

“There has been no reduction in service, thanks to the dedication of the firefighters,” Lachance said in the statement.

Kay Lazar, Dasia Moore, and Travis Andersen of the Globe staff contributed to this report.

John Hilliard can be reached at [email protected]