Electric lighting is a significant part of the energy consumption in buildings. Driven by the rising energy demand, the contribution of lighting to energy consumption is anticipated to grow. In the last decades, this growing energy demand forced governments and manufacturers to think about alternative ways of generating electric lighting. Promising developments in the lighting industry, such as the introduction of solid-state lighting (SSL) devices for general lighting, made a huge impact. SSL devices have several advantages over previous lighting technologies, such as compact size, longer lifetime, directionality, high efficacy, ease of control of light output, and high color quality.

Spectral power distribution (SPD), radiant power as a function of wavelength, is a crucial part of luminous efficacy and quantification of the color quality of a light source. The color appearance of an object is constituted by the light source spectrum, the object’s spectral reflectance, and the human visual system. Objects reflect some of the incident light on their surfaces, and the reflected light reaches observers to be perceived as the color of the object. However, some of the light is absorbed by the object and turns into heat, causing the absorbed energy to be wasted for illumination purposes. Since SSL devices offer finer control over the spectral output of a light source, we can conceive of a lighting system that can save a considerable amount of energy while preserving light quality by optimizing the spectra to reduce the energy absorbed by physical materials around us.

A potential implementation of this system is shown in Fig. 1. A spectrally-optimizable lighting system would contain sensors to detect the reflectance characteristics of objects and emit tuned light to each object through a projection system. Although a 3-D real-time application is the ultimate goal, an earlier adaptation of such a lighting system could be illuminating 2-D structures, such as paintings and façades in galleries, museums, and historic buildings.

Connectivity of SSL devices plays a crucial role in the realization of real-time light optimization. We are living in an era where LEDs can be utilized to transfer data with speeds up to 224 Gbps.1 Intelligent lighting control systems are increasingly used in buildings, and they are paired with sensors to reduce energy consumption and maintain good lighting solutions for occupants. It is possible to imagine advanced lighting controls and sensors to be deployed in the near future to optimize light sources for object colors. This concept is not limited to existing light technologies, such as LEDs. Any lighting device with connectivity and precise spectral control can be utilized in this system.

Initial investigations were undertaken to form the conceptual and theoretical basis of the spectrum optimization for object reflectance. Earlier research findings showed that energy savings between 38% and 44% are possible without causing perceivable color changes if the theoretical light source spectrum is optimized for object reflectance.2 This study also revealed that greater energy savings would be achievable, between 43% and 62%, if higher color shifts were allowed. In this study, reflectance characteristics (i.e., object colors) were grouped according to their spectral shapes. Not surprisingly, green objects resulted in relatively higher energy savings, which is due to the increased sensitivity of the human visual system to the middle wavelengths. Using an analogous method, theoretical two-peak test SPDs were used to outline energy savings of up to 71%, without causing color shifts.3

Building on these studies, in the next study, we aimed to prove that this concept can be applied in a real-life setting. Instead of theoretical spectra and colored test samples, narrowband LEDs and real objects were used to quantify energy savings and color shifts.

Nine commercially-available narrowband LEDs were optimized to illuminate commonly found objects that are iconic for their color appearance (a Coca-Cola can and a tomato for the red hue; a mandarin and a carrot for the orange hue; a 3M Post-it Note and lemon for the yellow hue; a Granny Smith apple and a lime for the green hue; and a container of Nivea Creme moisturizer and blueberry for the blue hue). A routine was introduced to generate spectra by incrementally mixing nine LEDs in several steps. The difference in the color appearance of these fruits and vegetables under either a phosphor-converted LED (pcLED) or a phosphor-cconverted LED with an added red (pcLED+red) illumination (reference conditions), and mixed narrowband illuminations (test conditions) were calculated as shown in Fig. 2. 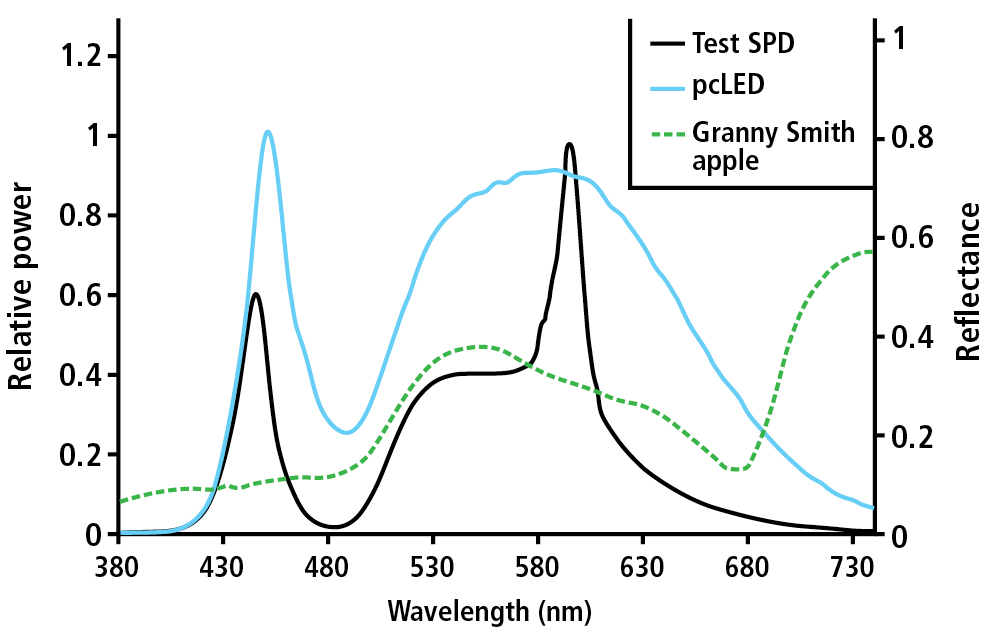 FIG. 2. The test spectral power distribution (SPD) shown — a combination of three narrowband LEDs — can save 17% energy compared to a reference white pcLED when a slight color shift in appearance is allowed. (Image credit: See Reference [4], by D. Dorukalp and W. Davis.)

Results show that the optimization of the narrowband LEDs can reduce energy absorption while maintaining color appearance. Although energy savings (between 2% and 15%) were smaller compared to the original study, the concept has been proven to deliver energy savings regardless of the technology.4 Higher energy savings up to 19% noted possible, if small but not disturbing, color shifts are allowed. Certainly, even higher savings would be achieved if truly tailor-made spectra were used.

This study also looked at human judgments of color appearance under spectrally-optimized light sources. Even with higher color differences (up to a certain extent), participants found real objects, such as fruits and vegetables, to be equally natural and attractive, which can enable higher energy savings. The only exception to the findings was the appearance of the tomato. The translucent nature of the tomato made participant judgments harder, thus underlining the need for further research for translucent objects.

In a more recent study, this concept was applied to artwork to reduce damage caused by optical radiation. The light projection system prototype consisted of a CCD camera, an RGB projector, and a computer. Joaquin Sorolla’s painting Women Walking on the Beach was illuminated pixel by pixel with an RGB projector to visually restore its appearance and minimize future damage.5

The work investigating the optimization of the light source spectrum has been looking at the spectral content and individual colors so far. It is evident that such a system will need to detect object colors in complex scenes and emit colored light to these objects. This will require computational power, precision optics, and reflectance recovery — in real time. Although the precision, spectral control, and speed needed for this projection system seem immense, it is essential to highlight some of the advancements in the field of sensing and projection technologies that can be used for the proposed concept. For example, an indoor positioning system (IPS) locates objects and people inside a building by sensory information collected from mobile devices. Since the global positioning system (GPS) is not suitable for indoors due to signal scattering from roofs, walls, and other objects, a Wi-Fi, Bluetooth, radio-frequency identification (RFID), or other wireless technology could be used to locate object positions and orientations.

While the position, orientation, and speed of objects in space are important factors, the optical surface characteristics of objects are more fundamental to the proposed system. Luckily, there has been a growing interest in the topic. Surface reflectance functions of real objects have been estimated with multispectral cameras6, color-encoded projections7, and hyperspectral imaging8. In these studies, objects and light sources were immobile. However, real-time motion and surface recognition9, real-time object tracking and mapping10, and color estimation under varying lighting conditions and viewpoints11 have also been successfully accomplished by researchers.

Tunable high-precision projection systems are also key to the spectrally-optimizable lighting systems. Projection mapping, also known as video mapping, is a very popular method to illuminate complex objects in the real world. Arguably, one of the most well-known examples of projection mapping is the Sydney Opera House at the Vivid Sydney lighting festival (Fig. 3). Designers and video artists spatially map the surface of a target area, and design lighting projection or animations to add optical illusions, highlight dimensions or depths, or add a notion of movement to static surfaces. 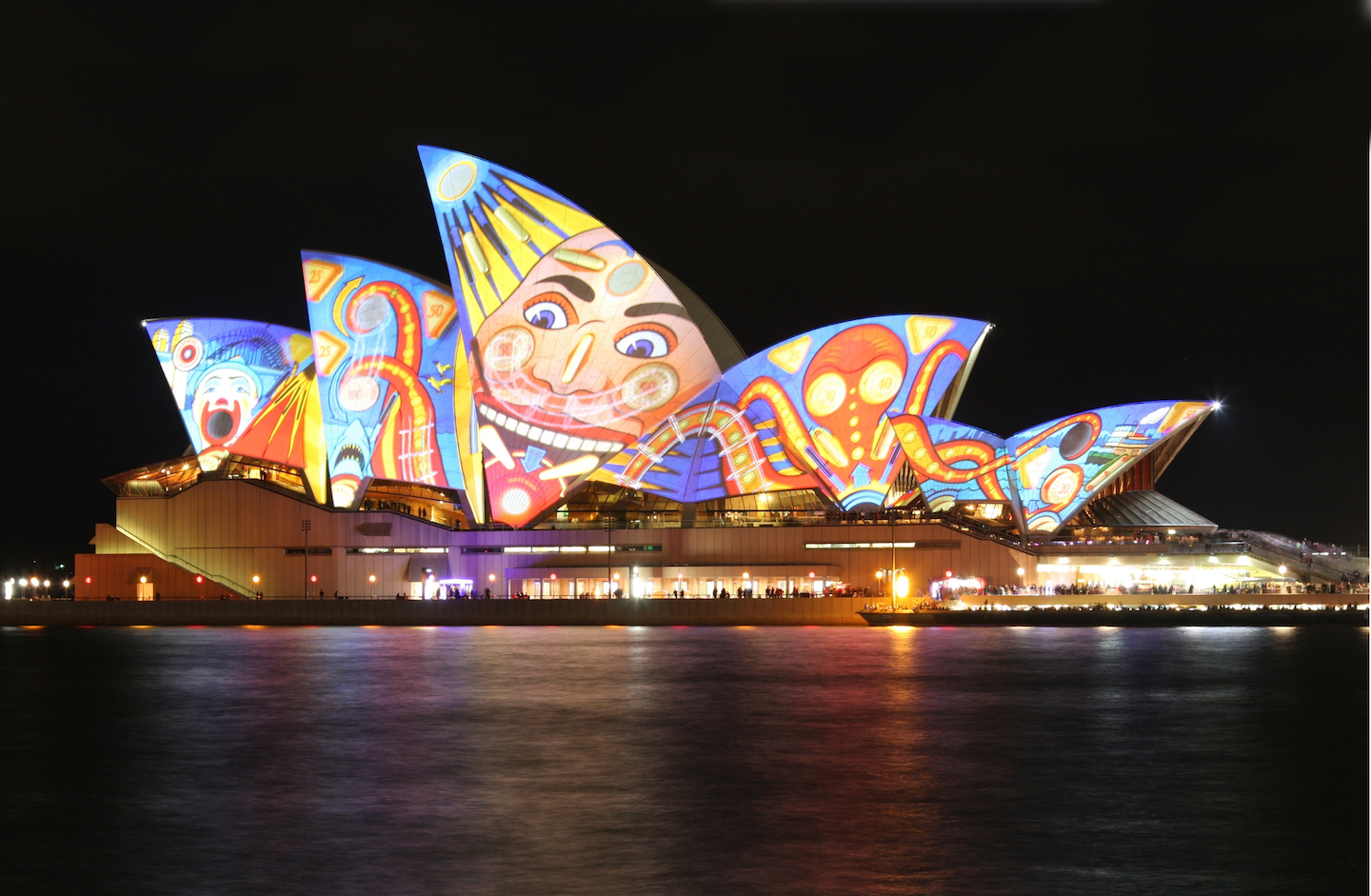 Next-generation projectors can provide 65,000 lm, 1,000,000:1 dynamic contrast ratio, and display resolutions up to 7680×4320 pixels.12 Although the resolution of a projection system is important, color reproduction plays a more vital role in the quality of the displayed image. Researchers were able to control a projection system independent of the existing lighting conditions, object color and texture, projector position, and brightness.13 Another study used an RGB projection system at a constant CCT to illuminate a surface area of around 1 cm2 and 2.5 cm2 for the projection height of 80 cm and 120 cm, respectively.14 Increasing progress in the field of optics can allow even finer control over the resulting lighting conditions.

The spectral optimization for the absorption-minimization method is a technology-neutral way of reducing energy consumption, which utilizes the role of light source spectrum in human color vision. Future emerging lighting technologies, such as quantum dots and lasers, can also be expected to be deployed in such a lighting system. A spectrally-optimizable lighting system can reduce energy consumption markedly while preserving the color appearance of objects. However, improved technical capacities in sensing and projection systems are considered necessary. While the technological capacity of projection and sensing systems may undoubtedly improve in the future, further research investigating the spatial and temporal aspects is necessary.

Get to know our expert

DORUKALP “ALP” DURMUS is an assistant professor in the Department of Architectural Engineering at the Pennsylvania State University College of Engineering. Durmus has published research findings in several academic journals and presented at international illumination, electronics and optoelectronics conferences, centering on the relationships between color science, visual perception, and intelligent lighting systems. He received a BS in electrical engineering from ITU (Istanbul Technical University); an MS in architectural lighting design from KTH (KTH Royal Institute of Technology, Stockholm); and a PhD in architectural science from the University of Sydney.

For up-to-the-minute LED and SSL updates, why not follow us on Twitter? You’ll find curated content and commentary, as well as information on industry events, webcasts, and surveys on our LinkedIn Company Page and our Facebook page.