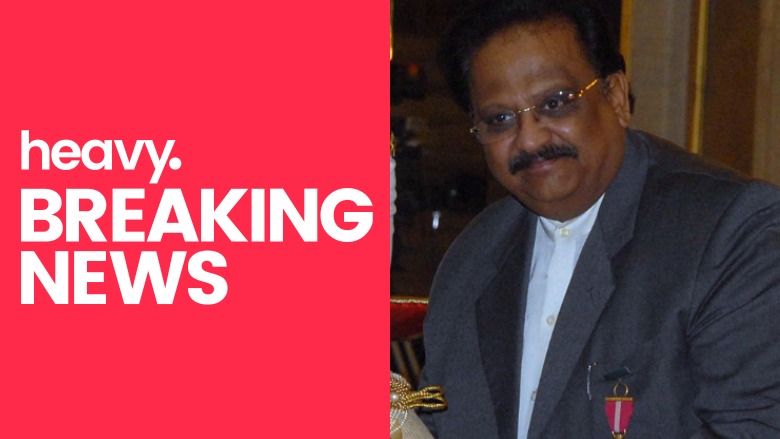 One day after SP Balasubrahmanyam was put on maximum life support, the legendary Bollywood playback singer died on September 25, as reported by The Hindu Times. He was 74.

Chennai’s MGM Healthcare hospital said in a medical bulletin on September 24, according to Times of India. Balasubrahmanyam previously tested positive for coronavirus, but has continued to battle serious health issues after COVID-19 was no longer detected in his system.

The hospital’s letter stated, “His condition in the last 24 hours has deteriorated further warranting maximal life support and he is extremely critical. The team of experts at MGM Healthcare are closely monitoring the situation.”

This most recent health update concerning SP, which is short for Sripathi Panditaradhyula, came as a shock since the singer’s son, SP Charan, who’s been sharing updates concerning his father’s health on Instagram, shared extremely positive news two days prior.

Fans have flooded the comments section on Charan’s post to wish Balasubrahmanyam, who was first hospitalized on August 5 a quick recovery. On August 28, Charan shared a video on Instagram and said, “We were expecting dad’s lungs to improve as they were but unfortunately we are still not at that point where we could rid him of the ventilator. But the good news is that dad is COVID negative.”

Coronavirus: Renowned Playback Singer SP Balasubrahmanyam Critical, Shifted In ICURenowned playback singer and musician SP Balasubrahmanyam, who tested positive for coronavirus on August 5, is in critical condition. He has been shifted to the Intensive Care Unit (ICU) and is on life support. He is currently being treated by a set of doctors and his haemodynamic and clinical parameters are being closely monitored. Watch…2020-08-14T12:51:32Z
When Balasubrahmanyam was first admitted to the hospital in Chennai on August 5, the singer shared a video explaining that he had contracted COVID-19, as reported by NDTV. He merely admitted himself for care as a precaution for his family members, and the National-Award winning singer assured his fans that there was nothing to worry about.

“They said I can stay home and self-quarantine myself, but I didn’t want to do that, Balasubrahmanyam said. “It is very tough with all the family. They are very concerned, they can’t leave you alone. So, I got admitted to the hospital. All my friends are here, they are taking good care of me. I am in good hands. And I have good health. Nobody has to worry about this one. So please don’t bother to call me to find out how I am. I am perfectly alright except the cold and fever. Fever has also subsided.”

“In two days, I will be discharged and I will be home,” Balasubrahmanyam continued. “Thanks for the concern. Lot of people have been calling me. I couldn’t attend all the calls. I have come here mostly to take rest so there won’t be any disturbance to me and to take medication.”

Balasubrahmanyam Has Recorded Over 40,000 Songs in 16 Different Languages

Balasubrahmanyam has also received numerous civilian honours bestowed upon him by Padmashri and Padma Bhushan — from government of India. Some of the performer’s most popular songs were recorded in the ’90s when he sang Salman Khan’s voice in films such as Maine Pyar Kiya, Humn Aapke Hain Koun..!, Hum Saath-Saath Hain, and Patthar Ke Phool, among others.