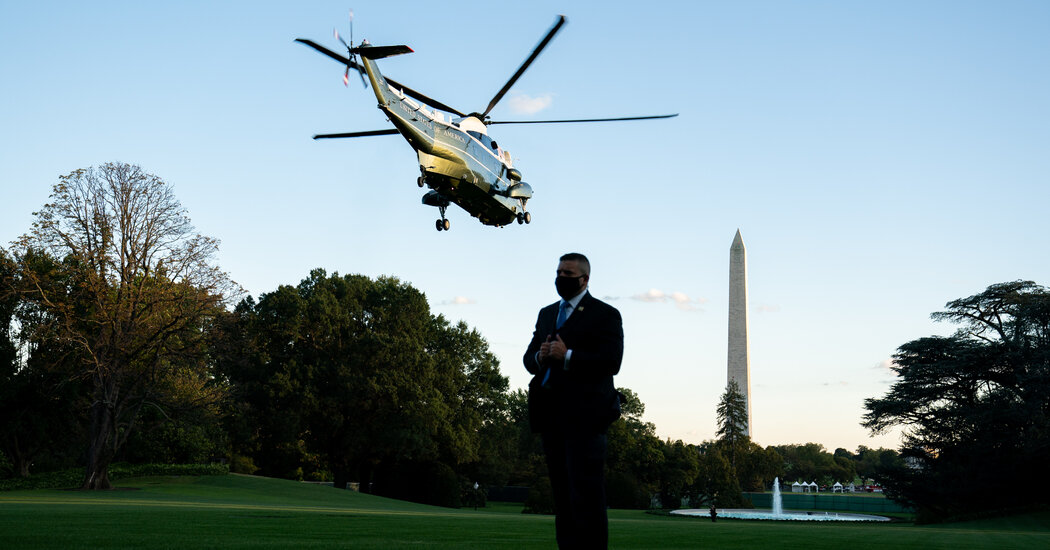 Donald J. Trump has told aides to think of every day of his administration as an episode in a television show.

That production, it turns out, does not take sick days.

The president’s diagnosis and treatment for Covid-19 has unfolded as TV drama, some of it stunning, some baffling — and some of it crafted by Mr. Trump’s own producers, in a surreal but characteristic attempt to try to wrangle control of reality through pictures.

On Friday evening, viewers saw possibly the most striking helicopter liftoff from the White House lawn since Richard Nixon’s after his resignation. Broadcast and cable cameras strained for an angle as Marine One collected the president, suffering from the disease that has paralyzed the country under his leadership, and carried him through the golden-hour light to Walter Reed National Military Medical Center.

Within hours, the White House began counterprogramming. At 6:31 p.m., Mr. Trump’s Twitter feed — eerily silent since his announcement early that morning — posted an 18-second video of the president, in suit and tie, thanking well-wishers.

The message of the video came not so much in the words the president said than in the fact that he was standing while saying them. Even as Mr. Trump was evacuated to Walter Reed, images were top of mind. An administration official said that it was better for Mr. Trump to board that helicopter on Friday, while he could be seen walking on his own, than later, when he might need assistance.

The treatment of the president for a potentially deadly disease would, for any administration, be a public-relations challenge as well as a health crisis. But that’s exponentially more so for a reality-TV celebrity who has built his political image on claims, however questionable, of machismo, vitality and vigor.

This is the president who, in 2016, contrasted himself with Hillary Clinton by constantly touting his “stamina”; who went on “The Dr. Oz Show” to boast about his testosterone levels; who told his staff to take off masks because they looked weak; who tagged his opponents with epithets — “low-energy,” “liddle,” “sleepy” — meant to brand them as weak and thus him as a big, strong man.

Now, in the last month of a re-election campaign, he was hobbled by the very pandemic that he had notoriously “played down.” How badly hobbled was no clearer after a bobbing-and-weaving on-camera press briefing Saturday by the White House physician, Dr. Sean P. Conley.

Had Mr. Trump been given supplemental oxygen in treatment? Not this morning, Dr. Conley said with a tight grin. Had he ever? Not this morning. (He had on Friday, Dr. Conley acknowledged on Sunday, adding that he had been trying to present an “upbeat attitude.”) How long had the president been sick? How severe were his symptoms?

Dr. Conley’s responses were like the Subtraction Stew in “The Phantom Tollbooth”: The more helpings he served, the more starved we were for answers. It didn’t help that he was contradicted by the president’s chief of staff, Mark Meadows, in off-the-record remarks that he began by asking to go off the record in front of live TV cameras.

Instead of clarity, we got more pictures. Saturday evening on Twitter, Mr. Trump posted a new video, seated open-collared and maskless at a table with neatly arranged binders and papers.

He was paler than usual and at one point appeared to gulp down a cough or spasm, but he spoke for four minutes, thanking his medical staff and seeming to defend his behavior — often mocking Covid precautions — before becoming infected.

For a president known to watch replays of his TV appearances with the sound off, the props were more important than the text. A table, not a bed; a collar, not a gown; binders, not medical charts.

Later that night, the White House released more official images of Mr. Trump soberly looking at the same array of papers in two different rooms. “Nothing can stop him from working for the American people,” his daughter Ivanka wrote, posting one photo on Twitter. “RELENTLESS!”

It is not clear what Mr. Trump was signing, in the middle of the page, in one photo, or if the papers were in fact even official documents. But you could not dispute that he was at work, because for this president, creating images has always been the work.

Mr. Trump’s chief business success — playing the role of a businessman on “The Apprentice” — was produced with the knowledge that the signifiers of work (a soundstage boardroom, stage-designed meetings) were more powerful visually than actual work.

He carried this lesson with him after his election, posing with a stack of manila envelopes at a news conference to represent the paperwork involved in his business, posing at a Mar-a-Lago concierge desk, Sharpie in hand and staring into the middle distance, “writing my inaugural address.”

Even in a serious health crisis, the president is hewing to the belief that it is better to look good than to feel good. His career is proof that images are powerful. But they are not antiviral. They might stave off the political consequences of a virus and its handling. But they don’t mean anything to a pathogen without eyes or ears, nor can they substitute for information about it.

For the rest of us, watching the fog and speculation of an unsettling weekend, reality still matters. All the appearances and images only underscored how much we didn’t know about what the president’s actual medical condition was. And of course, given the capricious course of this disease, we cannot regardless know his prognosis yet.

But in sickness or in health, the show must go on.