Memphis will have a larger crowd for its next home football game against UCF on Oct. 17.

The Memphis athletic department followed the news by stating that capacity at Liberty Bowl Memorial Stadium would increase to nearly 12,000 for the Tigers’ game against UCF.

The Tigers had an announced attendance of 4,537 for its season opener against Arkansas State on Sept. 5 when fans were required to be 12 feet apart.

In a statement Tuesday, Memphis athletic department Laird Veatch praised the health department for its pragmatic and thoughtful approach in keeping fans and citizens safe.

“I can’t wait to have more fans in attendance contributing to the game-day environment for our student-athletes during such an important matchup in our season,” Veatch said. “This increase was only possible because Tiger fans did a great job of complying with the safety protocols at the last home game.”

The health directive applies not only to Tigers football games, but also to high school football games as well as Tigers and Grizzlies basketball games. 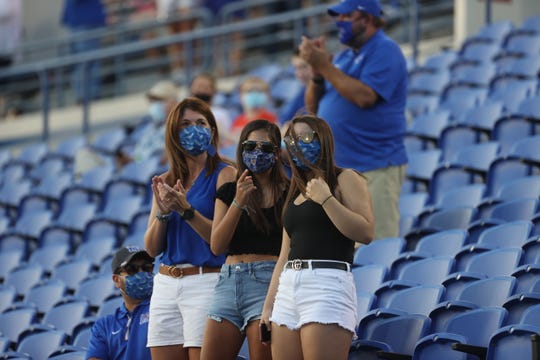 Haushalter said that after decreasing social distancing guidelines from 18 feet to 12 feet at sporting events, they didn’t see any increase in COVID-19 transmission. That led the health department to further decrease the amount of social distancing at outdoor venues.

On Tuesday, the health department reported 258 new positive COVID-19 tests out of 5,223 results. It’s the highest number of new cases since 291 were reported on Sept. 17 but the daily positivity rate was just 5%

Per the Shelby County’s COVID-19 data dashboard, the 7-day moving average of new COVID-19 cases was 119. The most recent weekly test positivity rate was 5.2% from Sept. 20-26, down from 6% for the week leading up to the Tigers season opener.

In June, the Memphis athletic department announced that only season-ticket holders would attend games and no single-game tickets would be sold in anticipation of social distancing guidelines.

Before the health department issues its directive, Memphis tight end said after practice Tuesday that he hoped more fans would attend so the team could feed off their energy. 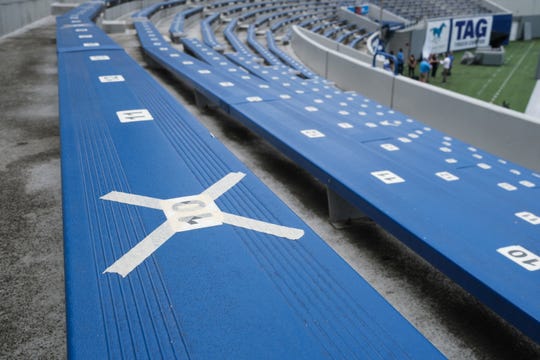 “It would definitely give the guys a little bit more juice and motivation to go out there and see who we’re playing for instead of just telling us it’s going to be a bunch of people watching,” Dykes said.

Haushalter said the health department will monitor games to ensure fans are wearing masks but added they are trusting those in charge at sporting events as well as the public to monitor themselves.

Want to stay informed on the latest Memphis sports news? A Commercial Appeal subscription gets you unlimited access to the best inside information and updates on local sports, and the ability to tap into sports news from throughout the USA TODAY Network’s 109 local sites.

You can reach Evan Barnes on Twitter (@Evan_B) or by email at evan.barnes@commercialappeal.com